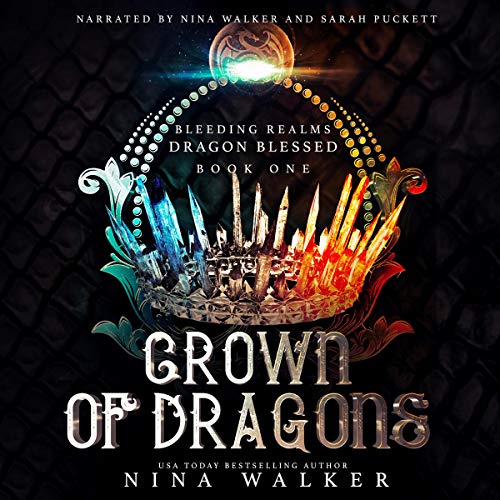 The normal world is an illusion.

Separated from other realms by a thin layer of powerful magic, humans are protected from the fae and dragons, the ghosts and warlocks, and an unfurling evil.

Khali Elliot is a princess - of sorts. She wasn’t born royal and yet she’s destined to become queen. As a dragon blessed with four elements running through her blood, her future lineage has already been claimed by the Brightcaster’ throne. She will marry one of the princes. She won’t get to choose which one. She will be obedient.

Hazel Forrester sees dead people. Her life is pretty much a bad made-for-TV special where being the haunted girl isn’t a gift, but a curse. Going away to college in a small town where nobody knows her seems to be a solid plan, that is until she meets Dean Ashton, the infuriating boy with fire in his eyes and far too many questions. She will ignore him. She will act normal.

But the realms are bleeding together, and the girls are linked. Bound. Spelled.

And little do they know, one can’t survive without the other.

From USA Today best-selling and Amazon Top 100 authors comes Crown of Dragons, the first novel in the Dragon Blessed trilogy and a look into the Bleeding Realms world, where high fantasy and urban fantasy are layered with forbidden romance, deadly magic, and nefarious designs.

Crown of Dragons is a full-length audiobook narrated by the author, Nina Walker, and award-winning narrator Sarah Puckett. Listen today!

What listeners say about Crown of Dragons

I read the e-book a couple years ago, and love it so much, that when I heard there was audio book preformed by the author, I had to give it a listen. Here's my review:

Shauna
5.0 out of 5 stars Wow! So intense!
Reviewed in the United States on August 20, 2019
Verified Purchase
This book was so intense, I was shocked when it ended. I will say that the first few chapters were a little jostling; jumping back and forth between worlds. However, by the 5th chapter I had a good sense of the characters, and could feel things starting to build. I was hooked! I didn't even realize how close the end was, until I turned the page, and there was nothing more. That's how into the story I was. It is definitely a cliff hanger ending. I can't wait to read the second book!
I have read other books by this author, and I can see a definite maturation in her writing.


I was not disappointed! Both performers did a great job, but Walker was definitely the shining star. She was able to convey the characters emotions very well, you could feel what they were feeling. Excellent performance!

I love this story! Sometimes the dragon shifter stuff can feel a bit cheesy to me, but Nina Walker did an amazing job creating a believable world of 2 realms, dragon shifters and more. The end of this book was mind blowing and now I can’t wait to see what happens with the 2 female MCs. Also, a note, it doesn’t leave you with a gut wrenching cliffhanger. There’s still a lot of unknown, so I’m ready for book 2, but some series basically leave you in the middle of the critical moment. Not this one- thank you Nina!
The narration was great! It’s also cool that the author narrated it! It makes me feel like I’m hearing it how she meant for it to be read since she’s the one reading it.
Overall, I Love this audiobook.

This book was so good. It drew me in and I didn't want it to end.

This was an exceptional introduction to a new series. The dual narration was a nice touch as we follow two different MCs. This was such a good build into wondering what the heck is going to happen in the next book. I have my fingers crossed on what I want to happen, but with all the twists and turns I don’t want to get my hopes up. This was really well done!

I really loved this book! Narrator was great! if you are looking for a fun easy read, choose this!

the storyline is good but the characters are whiny little girls. please get a new narrator

What an amazing book! I’m so excited to read more. Love all the magic, and the two worlds. Characters are so well written!