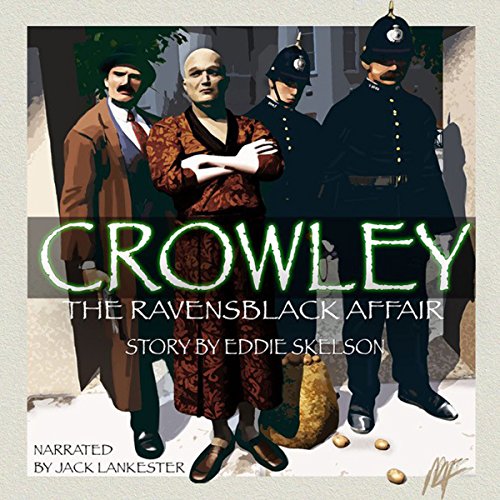 By: Eddie Skelson
Narrated by: Jack Lankester
Try for £0.00

Roused from his drug-induced ritual London's eminent occultist, Aleister Crowley is dragged into a live crime scene by short-tempered Inspector, Ron Bryson. An awful thing is happening at Ravensblack Hall and Bryson believes it might take a madman to placate another madman. Bolstered by the promise of free stuff and perhaps an opportunity to rubbish the name of an arch rival Crowley reluctantly agrees to help. However, his almost legendary sense of self-preservation soon advises him that this was a dreadful mistake.

The first part of a four part series, Crowley: The Ravensblack Affair is a dark comedy of Lovecraftian horrors, eloquent profanity, spiteful wit, and devious intent.

What listeners say about Crowley: The Ravensblack Affair, Book 1

Having previously read the Crowley series of books I was really looking forward to revisiting the beginning of the story through audible. It did not disappoint!!! The narrator really brought the characters to life with some proper laugh out loud moments. I would definitely recommend if you like horror, comedy or just reading in general! What are you waiting for?

Perfect for the Halloween season!!

Ok so you want scary, but fun?! I was so happy to find this book. Only thing wrong it’s only the first episode, can’t wait to hear more! The narrator is amazing! He really makes the characters come to life!! I so enjoyed this book!!