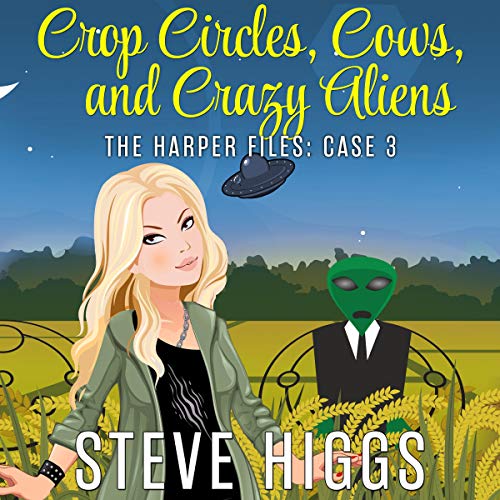 There are crop circles in the fields near Cliffe Woods and unexplained lights in the sky at night. Does the latest case have aliens at its core?

Of course not, because there is no such thing.

But, when a farmer hires paranormal investigator Amanda Harper to look into his glowing milk, she doesn’t sense how crazy things are about to get, and before she can even start investigating, a frozen body is found and the conspiracy theory nutters arrive to argue about the inner workings of an alien freeze ray.

Leading the bunch is none other than Jack Hammer, the handsome, self-proclaimed star of the internet show Alien Quest. He wants Amanda as a co-host to boost his ratings and won’t take no for an answer. But Amanda has other distractions, not least of which is her estranged uncle Knobhead arriving unexpectedly to offer his assistance - he was kidnapped by aliens, you know.

Amanda is going all out to solve this case, so let’s just hope the help she gets from best friend and police officer Patience Woods doesn’t slow her down too much.

Crop circles, doped cows, spacecraft sightings, and a mysterious government agency trained to repel alien invasions all combine to give Amanda Harper her toughest test yet in this funny, cozy mystery.

The Harper Files are a spin off from the Blue Moon Investigation Series where Amanda is introduced and recruited by Tempest Michaels. You can listen to this series without ever listening to the other books, but I have to raise a minor spoiler alert if you listen to these first and then go back to the Blue Moon series.

Please be aware that this audiobook contains some mild cussing and occasional sexual references. There are no elements that should be considered worthy of an R rating though.

What listeners say about Crop Circles, Cows, and Crazy Aliens

Enjoy these Harper novellas a lot. And this narrator was excellent.

This was a good mystery which features Harper with almost zero of the other regular characters aside from Jane doing some research, and Patience being her unique self. Lol

Worth a credit for sure. Moving on to next!