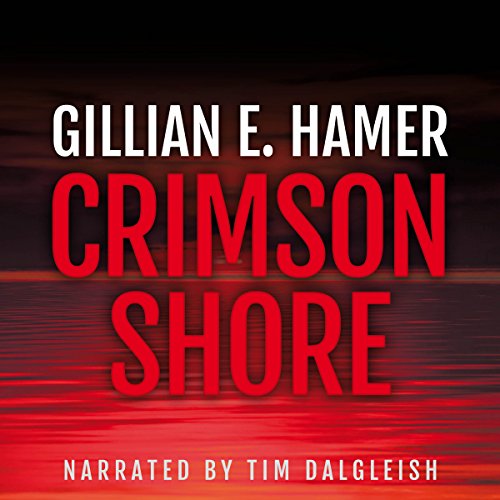 A half-naked woman dead in a ditch. A disappearing pathologist. A teenager run off the road. For a peaceful island, Anglesey is experiencing abnormal levels of crime. What's the connection?

DS Dara Brennan has women problems. His boss, Amanda Gold, is embroiled in office politics, and his wife thinks he's a disappointment. And then there's DS Kelly Morgan.

As missing-person cases become murder enquiries, Dara must put aside his personal life and focus on the killer's trail. The only tenuous link between the victims is an abandoned children's home. What happened there 20 years ago? And who is hell-bent on revenge?

Dara is keeping his eyes on the road. But he forgets to look in the mirror.

Crimson Shore is the first novel in The Gold Detectives series, set along the North Wales coast.

What listeners say about Crimson Shore

I always love a detective but particularly enjoyed the narrator bringing the characters to life for me.

I really enjoyed listening to this book. the characters were very real and you could relate to them. I found the parts of the story that were letters were chilling and really touched me. The narrator really made the characters come to life and I always knew which character was 'speaking'. There were points when I was listening to this walking the dog and the hairs on the back of my neck stood on end and I had to rush to get home. I think it is amazing that listening to a book could make me react like this. I will be listening to more books by this author in the future and more books by this narrator.

My second audio book and my first Gillian E Hamer book. I enjoyed it! The narrator tried really hard to encompass all the different dialects throughout. The story itself was interesting, as threaded through were the letters from the past written by a lonely child called Andy, which you knew were linked to the present, but weren't sure how exactly. When the thread unraveled towards the end, it was with a series of catastrophic events leading to the eventual shocking conclusion.

What made the experience of listening to Crimson Shore the most enjoyable?

The narration was excellent, great accents, easy to listen to.

What was one of the most memorable moments of Crimson Shore?

The story line twists and turns and is quite fast moving. Good background to the characters.

Have you listened to any of Tim Dalgleish’s other performances? How does this one compare?

It had me on the edge of my seat a few times. It was very topical and you really understood the motivations behind the murders.

If you could sum up Crimson Shore in three words, what would they be?

What does Tim Dalgleish bring to the story that you wouldn’t experience if you had only read the book?

A polished narration by Tim Dalgleish. I’d go so far as to say the perfect tone for the genre. I’ve listened to a few audio books and I was surprised how influential the voice is as to whether one continues to listen with commitment. The clever nuances between the various character dialogues meant I was never confused or backtracking.

Hamer is known to me through her other series and I knew I wasn’t going to be disappointed. This is book one in her crime series and we’re introduced to Dara Brennan as he finds his way through a murder case. Great characters as always and all set in a familiar area to me on and around Anglesey, North Wales.
Completely believable, great plotting and combined with the excellent narration, this comes highly recommended.

Really enjoyed this book, the narrator was excellent...so much better than the narrator of the other books. Really good story.