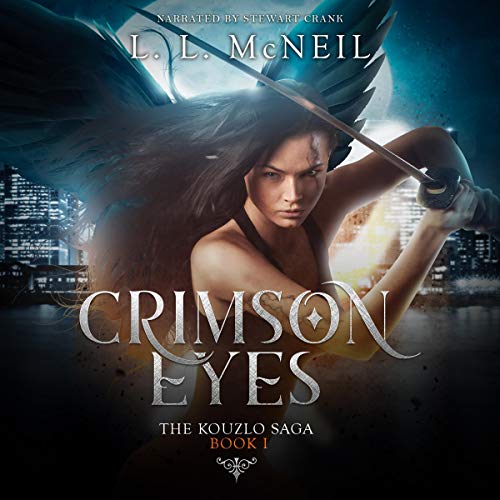 Seila has been slaying demons for as long as she can remember.

A Phantom, she travels the length and breadth of England in a quest to reclaim her humanity - and her soul. With her Sieken Blade, she cuts down the demons in her path to keep herself alive as she inches closer to freedom from her hunt.

When an Elite Demon makes sport of London’s Kouzlo - a secret organisation of supernaturals dedicated to ridding the Earth of demons and sealing the portals they slink through - its leader, an ancient enchantress called Fallow, implores Seila to join their cause before they’re wiped out. Desperate to save her Kouzlo and the people they protect, Fallow turns to the Phantom for aid, and pledges to help Seila reclaim her soul in return for her formidable skills.

The demon hunter is torn between her lone hunt and joining Fallow’s decimated forces - where she might have a chance to stop the demons once and for all.

Thrown in with Damon, a fledgling half-fire elemental with limited control of his powers, and Tej, a reckless human with a penchant for crossbows, can Seila and her new allies keep it together long enough to save London?

With demons, dragons, and kick-ass characters, this is a new demon hunter series that you can really sink your teeth into!

What listeners say about Crimson Eyes

Thank you so much to the author for providing me with an ARC of the audiobook for review!! I feel that going into this, the description for the book gives WAY too much away. It's 50% in before all that's mentioned happens and it makes it a little underwhelming. Going into this you SHOULD know that it follows our MC, Seila has had her soul taken by an Elite Demon. In order to survive, she hunts down lesser demons to sustain herself while searching for her soul. That's pretty much all you need to know. The story itself began totally bad ass, but slowly turned into a snooze fest. Seila has no idea how long she has been hunting, does not like people, and is supposed to be unstoppable. Suddenly, she explains herself to randoms and is friends with them?? I dunno... I get that they were elementals but that just doesn't fit with how our MC was described. She goes from lone wolf to one of the pack? Eh. I loved the relationships between Damon, Tej, and Amber. So much trust and they all truly cared/supported each other, even when something wasn't to their liking. Speaking of Amber, why wasn't she in the books description? She sure does more then Tej. I also liked the combat scenes. I felt they were perfect amounts of action and gore for a YA book, but what annoyed me was how repetitive the Elite Demon's voice was...I got tired of hearing it so much and he was saying the EXACT SAME THING. It's still never really explained why she can hear his voice, but I feel like by being a Phantom, maybe you are part demon? I also wasn't a huge fan of the names. Seila-Sekkie. Delgo-Fallow. They started to sound too similar and I still don't think that Dalgo and Fallow have any major impact on our story.

Demons don't stand a chance against her!

Seila is a phantom, after demons stole her soul, she lives on against all odds and gains power from killing demons. She's a solo act against evil until she meets Amber and her brother Damon and his friend Tej. As she tries to help them fight an elite demon, she gains something she never expected, friends. They introduce her to the Kouzlo a group lead by a powerful enchantress and a Djinni. Closing the mirage keeps the demons from taking over our world.
I really enjoyed the characters and the adventures they experienced. Delightful descriptions helped me be there in this enchanting and strange world the author created.
I was able to listen and read this book and it was made even better with the narrator. He did a wonderful job creating unique voices for each character and bringing the story to life. A fascinating fantasy world without romance, this book can be enjoyed by everyone

One heck of a good story

I really enjoyed all the main characters very much. The Narrator did a wonderful job with the voices (loved The Geni).
Story line well thought out and interesting as well as enjoyable. I will follow up by listening to book 2 in the near future.