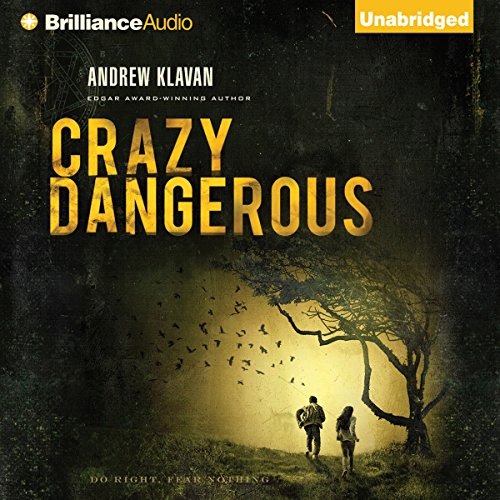 Sam Hopkins is a good kid who has fallen in with the wrong crowd. Hanging around with car thieves and thugs, Sam knows it’s only a matter of time before he makes one bad decision too many and gets into real trouble.

But one day, Sam sees these thugs harassing an eccentric schoolmate named Jennifer. Finding the courage to face the bullies down, Sam loses a bad set of friends and acquires a very strange new one.

Because Jennifer is not just eccentric. To Sam, she seems downright crazy. She has terrifying hallucinations involving demons, the devil, and death. And here’s the really crazy part: Sam is beginning to suspect that these visions may actually be prophecies - prophecies of something terrible that’s going to happen very soon. Unless he can stop it.

With no one to believe him, with no one to help him, Sam is now all alone in a race against time. Finding the truth before disaster strikes is going to be both crazy and very, very dangerous.

Crazy Dangerous was easily the most surprisingly enjoyable read I've had it a long time.

It was a fresh, clever and exciting adventure that dealt with the risky topics of religion and mental illness in a compassionate and relatable way.

The story is so brisk it felt far shorter then it full-length run time. It never wallowed in melodrama, subplots or backstory and I went though the whole book in one go.

I was hooked immediately and stayed engaged right through the action-packed climax that I couldn't have put down if I wanted to.

What I loved most about Crazy Dangerous was it's approach to the Christian faith.

I am a non-Christian and I almost always hate books with a religious leanings. They are usually either too preachy to be enjoyed or too flippant to be taken seriously.

Kalvan's down-to-Earth approach to religious belief was refreshing and framed the story perfectly. Sam is a good kid driven to do the right thing. His honest and decent nature was clearly informed by the moral teachings of his preacher father but the bible doesn't rigidly dictate his actions.

Sam seems to have many chances to take the 'easy' way out of the tangled web he finds himself in. The more we understand Sam though, the more we realise that when it comes to him doing the right thing, whatever the consequences, there is no choice about it at all.

Being so completely invested in Sam as a character and just cheering for him to overcome the violent malevolent forces seeking to hurt others made Crazy Dangerous utterly compelling reading.

I cannot recommend this book enough to anyone wants a powerful YA read.

The storyline was exceptionally plotted! I think the narrator made the story come the life even more than if I would have read it myself. I must say that I really recommend this book to anyone interested in mystery, horror and adventure. It’s a story I can see happening in real life. It’s realistic.

Every book I've read (or listened to) by Andrew Klavan, who is the writer of this book, astounds me. He is a fantastic author; he's my favourite author actually. He has the innate ability to place you in the story. He fills your mind with the images he wants you to see. He never fails to bring you a book that will make you keep turning the page or, in the case of an audio book, keep listening. He is my all-time favourite author and has written most of my favourite books. I highly recommend you check this one out, I'm sure you'll love it.

This was a fantastic book! It kept me on the edge of my seat the whole way through. So many twists and turns. Loved listening and the narration was amazing!!!

enjoyed following the story and seeing how the Adventure unfolded., great for teens who like action and adventure.

This was my first opportunity to read anything by Andrew Klavan, but I already knew of his other novels and I did enjoy the movie, Don't Say a Word, which was based on his novel. This is a teen novel and I am an older adult, so I'm outside of this book's target audience, but I have to say that I really enjoyed it. The narrator did a great job all around, but particularly with Sam, the main character, who I found to be very likable. Also, I appreciated the way the story portrayed someone suffering from mental illness. I'm not sure why this novel is classified as sci-fi/fantasy. Although the plot has some supernatural elements, I think that calling this sf/fantasy may cause some people to be disappointed if they are expecting the story to have strong fantasy elements. I do read a fair amount of sf/fantasy and I think this would best be called simply teen fiction or, maybe mystery or action-adventure. I'm looking forward to discovering more works by Andrew Klavan, as well as Nick Podehl as narrator.

I loved this book! it was both very well written and read. an great book that will inspire you to do right, and fear nothing.

Andrew Clayvin did it again