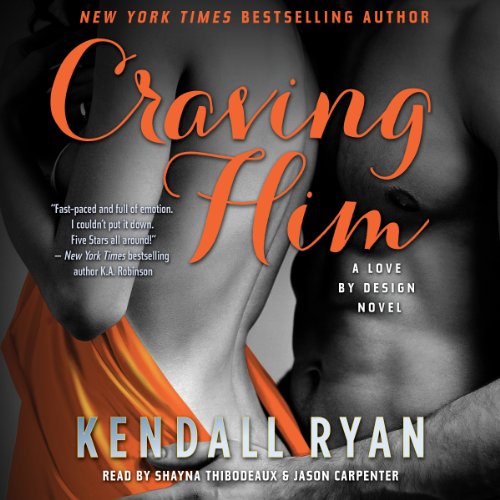 By: Kendall Ryan
Narrated by: Shayna Thibodeaux,Jason Carpenter
Try for £0.00

In Working It, New York Times best-selling author Kendall Ryan delivered a sexy and addictive contemporary romance about Emmy Clarke, a sweet southern girl out of her depth in New York City’s cutthroat fashion industry, and Ben Shaw, the hot male model who introduced her to a world of pleasure. But their story is far from complete.…

Emmy Clarke is no quitter. Toughened by her experience working for fashion heavyweight Fiona Stone, Emmy has come a long way from her country girl roots, embracing her fast-paced and unpredictable life in New York City.

Though that life comes with more than a few complications.

First there’s the mystery of Fiona’s pregnancy, which may or may not involve Emmy’s boyfriend, superstar male model Ben Shaw. Emmy has always known that Ben comes with more baggage than she can handle - and not the Louis Vuitton kind. Yet Ben is the only man who has ever loved Emmy for who she is, and she wants nothing more than to do the same for him, even if it means forgiving his past and overlooking their wildly different lifestyles.

But when a shocking secret from Ben’s past comes to light, unraveling all of their progress, Emmy must decide if their relationship is worth the fight, or if it’s time to ignore her passion for him and let go.

What listeners say about Craving Him

I enjoyed this second audiobook in a trilogy very much! The relationship comes to a loving end after a lot of turmoil, mostly caused by the interference by Fiona, Bens manager. But Emmy and Ben are too much in love and that saves the day.

Ben and Emmy's story continues and what a bumpy road it is! The sex scenes are hot as hell with these two! Unfortunately, Ben's past keeps rearing it's ugly head and Fiona is one conniving little bitch! Will Emmy have what it takes to stay with Ben despite his sordid past or will it be too much for her? Her insecurities are on high alert everywhere they go and it is wearing her down!
Loved this deep romantic series about a hot male model and an ordinary girl falling in love and then battling the obstacles that stand in their way of a happily ever after!

This book picks up only a couple of months after the end of book 1. After reading Working It, the reader is left with so many questions, and book 2 jumps right back into the pull and tug between Ben and Emmy. Honestly, it was a bit too quick for me, but I can imagine it's plausible for someone to be swept up in the moment of seeing him again for the first time in months and still feeling the need to be with him.

How can Emmy trust Ben after what happened with Fiona? How does she deal with still feeling like she doesn't fit into his world? Can Ben handle how deeply he feels for Emmy, how much he craves her, since he's never felt this way before? Can Emmy forgive Ben for keeping things secret? Can she overcome his past?

As before, Kendall Ryan sure knows how to write some steamy scenes. She has this keen chef ability to throw just the right amount of each ingredient - sweet, sexy, drama, and angst - making the perfect recipe for this book. The author has a great way of writing through Emmy's insecurities to make me feel like I'm in her shoes, but balances it out with how much Ben truly cares for her because she doesn't fit the mold.

“I’m thankful as s*** you don’t fit into this world. You remind me that there’s so much more to life. You’re my something to grasp on to at the end of the day. You ground me. I love you.”

Emmy struggles with her decision to continue a relationship with Ben. Not because she doesn’t love him with all that she has, but because she struggles with feeling that she will never be enough to fit into his world. Ben has never known anything but the glorious life of travel and luxury. Always surrounded by beautiful women, whom Emmy feels she will never measure up to, she wonders if love is really enough.

Ben has never needed another person the way that he needs Emmy. Not only does she see Ben as a person and not some famous model, but Emmy loves him for who he is, baggage and all. There is no doubt in his mind that Emmy is the one for him, and he will do everything in his power to keep her.

What I love so much about this book was that the relationship between Emmy and Ben is real. They have their troubles and they have to really work to get through them. Ben has a past, a very real one, and Emmy struggles with being a simple girl constantly having to deal with his past that feels like she will never beat.

Ben has never wanted to be tied down. He’s enjoyed the lifestyle he has, traveling and never keeping to just one woman. But Emmy has completely turned his world upside down, and now Ben struggles with trying to prove to Emmy that she is all he will ever need.

In Working It, we got little bits of what Ben was thinking and feeling, and I loved that in Craving Him, we get so much more from him. You are really able to understand and feel the struggles that both these characters go through. This was such a beautiful end for Ben and Emmy.

Awesome Loving Beautiful Story By Lauren Blakely, The Second Series To The Series For This I Have Been Listening To Audience Audio! I’m Been Very Interested In Love With The First Book, Second Book Series’s Had Been Great & Frantically Awesome Loving Beautiful Story, Lauren Blakely! U Outstanding Ur On This Series’s Again, Melissa’s A. Carter’s 🤩🥳🥰🤗😁💕

I think this was an adorable story. I loved that emmy and Ben got a happy ever after. I love Fiona was out of their lives finally good story 😊

The story was good. There was minimal erotica sex in this book compared to book 1. I would have liked more but that's my preference. I enjoyed the narrators Shayna Thibodeaux & I really loved Jason Carpenter's sexy voice. I look forward to listening to more of Kendall Ryan's books. A note to the author, please make your books longer than 3 - 6 hours (7 to 9 is preferred).

I got so annoyed with her mind, if that makes sense. Having a little hesitation is one thing, but honestly, the things that she got mad at him for, were NOT his fault! I mean seriously, how old are these characters supposed to be again??

She wouldn't have been so apprehensive and childish.

What about Shayna Thibodeaux and Jason Carpenter ’s performance did you like?

They did a wonderful job, as always. I purchased this book because they had teamed up to narrate it. Every other book they have done together I have enjoyed!

Was Craving Him worth the listening time?

Sure, it got me through the long ride to work.

I didn't like book one but goodness I really don't like book two. Goodness this girl. In the summary promised she were toughened by her experience and embracing it, but damn this girl complains and whine even when Ben's not doing anything to be warrant her low self esteem. I really don't like whiny female especially when she doesn't even try to work things out but always running. At least Ana had some back bone in fsog. Ben deserve so much more. Hell Fiona would have done perfectly.
Anyway, though I didn't really like this book I still approve of the narrators.