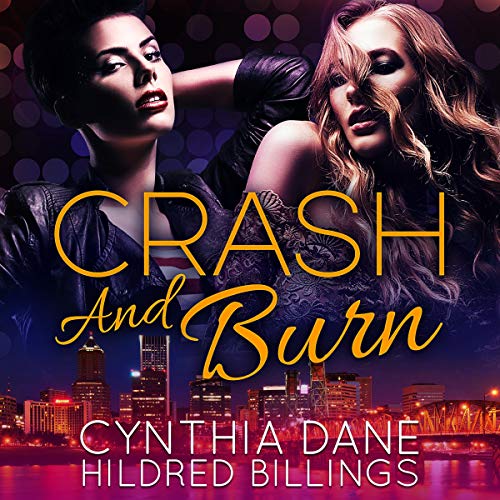 By: Cynthia Dane,Hildred Billings
Narrated by: Laura Angell
Try for £0.00

A full-length romantic suspense with a HEA!

Includes a Chapter 1 preview of Blown by an Inconvenient Wind by Hildred Billings.

Jade Emerson didn't take up a job in private security to be paired with her worst nightmare. But that's what she gets when her boss sends her on assignments with former FBI agent Stella Moore, who is brash, forgetful...and dangerously hot.

Their tenuous attraction is at times exactly what they need and at other times a detriment to their clients. That is until a frightened wife hires them to protect her and her infant...from her husband.

The rainy city of Portland has seen its share of female couples, but these two are thornier than the City of Roses. Can they overcome their dating pasts to save a woman in need? Or are they doomed to crash and burn...taking half the city with them?

This audiobook is set in the same universe as Hildred and Cynthia's other romances, meaning you may see some old familiar faces!

What listeners say about Crash and Burn

Yet another book I liked more than I thought I would when I began reading (or, rather, listening in this case).

Jade grew up in Medford, Oregon, then joined the Air Force and is now starting a new job in Portland as a bodyguard. She knows who she is (100% lesbian) and is pretty earnest about her job and her life. Her new partner, Stella, is much more complicated. She’s messed up on many levels, but pretends she’s fine and happy with her life, and that all she cares about is getting laid as often as possible. She identifies as bisexual but doesn’t believe she could ever fall in love with a woman. She has a bad habit of sleeping with her job partners, and is still hung up on her ex-boyfriend, Agent Joseph Montoya. It doesn’t help that he’s hot, nice, loyal and that she literally took a bullet for him when they were working together. She used to do undercover work and is very good at hiding her feelings, including from herself.

At first, I was worried I’d get bored with Stella’s attitude and all her pining for her ex-boyfriend, how she likes to fuck guys and all that. It didn’t last long, though.

While Jade is straightforward and easy to like, Stella is the most interesting character, and the one who grows the most over the course of the story (a story that doesn’t stop at romance as both women get sucked into a murder investigation and a kidnapping ring). She’s a lot less shallow than she seems at first. She’s dealing with a lot at the beginning of the story – a career change she might not have really wanted, a break-up she’s not over, endless pain in her shoulder, loneliness she pretends not to feel. She reminds me both of Michelle Rodriguez before she was comfortable with her sexual orientation and of Cobie Smulders’s character in Stumptown, which coincidently happens to also take place in Portland, Oregon. That attitude I was worried about hides a very complex, flawed and multi-dimensional character. As much as I liked Jade at the beginning, Stella was my favorite by the end.

have the book and I thought I would listen to it on audio. it was ok, you know when you read the book you get a voice in your head for what the characters sound like. Well the voice in my head and the narrator voice of Stella were totally off, although I thought she did a good job on the other characters. I like the author and her books I would rate it at a 4.

This audible was very bad. The narrator was terrible. The voices for characters really was awful . Even the
sex scenes were bad. I couldn't stand to hear her voice it was like chalk on a blackboard. Maybe it wouldn't
have been so bad if it was another narrator. I forward faster all through audio. And it was too long to be so
bad.

Being from Portland, it was great that I could relate to the city well and the frame of mind of the people there. Hell, I have definitely stood in Powell's looking at the lesbian sections as they did. The narrator also pronounced Tigard as "Tie-guard" which caught me off guard hearing it so many times though. Overall, the story line was great though and I love that the main character wasn't afraid of being open about her sexuality. Plus women kicking some ass is always a plus! ;)