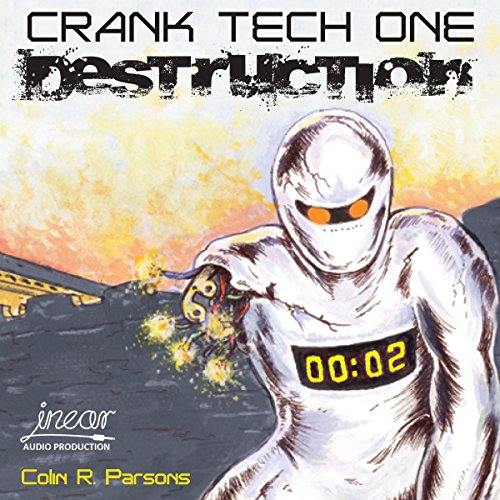 By: Colin R Parsons
Narrated by: Dave Bulmer
Try for £0.00

When looking for the perfect prop to help show off his new sci-fi novel to school children, author Tim Bailey finds a perfect match for the robot in his story. But this robot gets a little too close for comfort when a storm fries its circuits and his novel gets downloaded into its memory. Can Tim and his brother, David, stop Crank Tech One completing its mission?

What listeners say about Crank Tech One

Sci-Fi Action, Adventure, and Crank Tech One, too.

Would you listen to Crank Tech One again? Why?

Despite the cover image, and title, the story takes place in modern times, and follows a writer named Tim Bailey. The cover of 'Crank Tech One: Destruction' doesn't capture the humor and wonder of the story. It instead gives the feeling that this book is a cyber punk, robot must 'kill you now' feeling, which made me dread listening to the audio book at first. I'm thankful that this is not true. It shows a one armed Crank trying to complete its mission, to open a sealed chamber, but without the second arm needed to open the vault, it sets itself to self "Destruction". My suggestion would have been to put the silhouette of a person in the foreground, reacting to Crank in the distance. With the person's hand on his forehead, and gestures as if saying "Could this day get any worse?" The back of the paperback book gives a much better view of the stories contents, with the tag line "Some Robots Should Be Left Well Alone".

The books main character is Tim Bailey, a writer of sensational action packed stories. To help promote his new book {about a robot on the rampage} he goes looking for a prop. The book is called "Crank Tech One", also the name of the robot. Through various misadventures he acquires a prop, that turns out to be a real, hi tech robot. Through a accident the robot gets damaged and ends up using his book as a program, and mission objective. The robot then heads off to the city center of Cardiff, weapons armed, and all sorts of unexpected events happen, as the robot crosses the U.K. country side.

The character of Tim Bailey is someone who would like nothing better then to write a book, stay at home, enjoy some nice tea, and watching television. The kind of guy that would get tongue tied when a pretty girl makes eye contact with him. As Crank ends up missing, things get more complicated when his 14 year old brother David comes to visit him. Off they rush to prevent the inevitable mayhem, yet at every turn they end up going one step forward, and two steps back.

There are bully like characters introduced simply by their attributes, Gorilla the grumpy fellow, and Weasle his side kick. There is the annoying, and snooping next door neighbour lady trying to find out what secret Tim and his brother are hiding. Creepy secret agent guys known as Bod and Huey, and even a eccentric scientist. About half way through the book there are two female characters introduced, a police detective, and her college professor friend.

The story as cartoon type violence, of being cut in two with a lazer, and people turning to ash. There are plenty of action moments, explosions, car chases, and the occasional brawl. The story is generally children friendly, and reminds me of an old 1930's type movie serials with lots of cliff hangers at the end of each chapter. In some ways it reminds me of the first half of the film 'Short Circuit'. And a bit of the Isaac Asimov/Janet Asimov book 'Norby: the Mixed-Up Robot' with a similar female officer, and the older brother's relationship with her.

Unlike the 'Back to the Future' movie, or 'The Goonies', which have quite a bit of adult language at the beginning, and what some people might consider crude humor. This book incorporates that sense of wonder, adventure, and humor, but in a more 'all ages' way. I think that anyone that enjoyed those movies or the 'Indiana Jones' films, they will enjoy this book. The book has several references to films of the 1980's, and to the other science fiction shows like Dr. Who, which had several of it's episodes filmed in Cardiff. The mishaps, the comic situations, and adventure quest formulas are all here. Supplemented here and there in the story, the reader also gets a glimpse of what the 'Crank' is thinking and it's motivations to complete it's task. This type of humor, comedy, and dispare of a robot situation gone bad is one of the reasons I loved the earlier animated music video 'Chiron Beta Prime', which gives a good glimpse of the world would be like if Crank accomplishes his mission. in that style, this book follows in that line of great sci-fi action, comedy made popular by things like The Hitchhiker's Guide to the Galaxy.

The author Colin R. Parsons mostly writes children's fantasy books, all with this sense of wonder and adventure. The story itself is rather good, with the mixture of unbelievability, and realism that draws the reader into going along for the ride. The story also leaves many questions unanswered, and gives a foreboding feeling that this story isn't over. However it has a 'several years later' type ending, which means that any second story would be much later in the characters lives. Just like the main character in this book, Colin also gives talks to schools, and reads segments of his book in public. Several of his other books are also supposed to be turned into audio books, by a company called Living Audio, but so far I haven't been able to find them. This book is also produced by a different company called "In Ear Entertainment".

The audio book version of "Crank Tech One: Destruction" by "In Ear Entertainment", is much like a one man show, where the actor preforms each character, in a different tone, accent, and with different voices. The story itself is written in a way that it can be easily read aloud, and these two features blend together wonderfully. Like any great voice over artist the reader Dave Bulmer, can change his voice in mid sentence, and can shout at the drop of the hat when needed.

The Audio Book Producer: In Ear Entertainment, producer of audio book version of this book, and creator of other audio book collections, and podcasts, including one of my favorite "Supermarket Matters".

Which character – as performed by Dave Bulmer – was your favorite?

What other book might you compare Crank Tech One to and why?

The Hitchhiker's Guide to the Galaxy by Douglas Adams, for humor, and lead character is very much like Arthur Dent. 'Norby: the Mixed-Up Robot' by Isaac Asimov/Janet Asimov, the robot difficulties, and with a similar female officer, and the older brother's relationship with her. I even heard that "In Ear Entertainment" might even be looking into doing the Isaac Asimov David Starr/Lucky Starr series as audio books, which I'd realy enjoy.