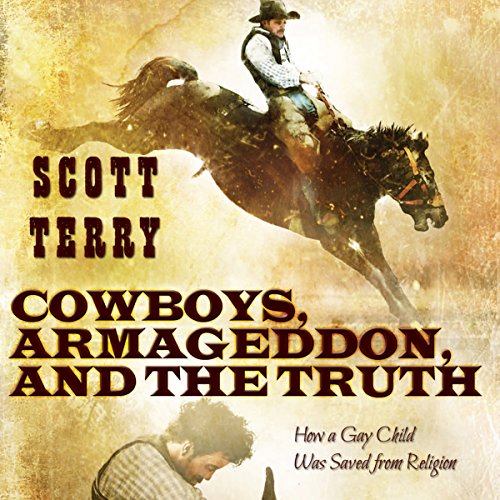 Cowboys, Armageddon, and the Truth

Cowboys, Armageddon, and the Truth: How a Gay Child Was Saved from Religion offers an illuminating glimpse into a child's sequestered world of abuse, homophobia, and religious extremism. Scott Terry's memoir is a compelling, poignant and occasionally humorous look into the Jehovah's Witness faith - a religion that refers to itself as The Truth - and a brave account of Terry's successful escape from a troubled past.

At the age of ten, Terry had embraced the Witnesses' prediction that the world will come to an end in 1975 and was preparing for Armageddon. As an adolescent, he prayed for God to strip away his growing attraction to other young men. But by adulthood, Terry found himself no longer believing in the promised apocalypse. Through a series of adventures and misadventures, he left the Witness religion behind and became a cowboy, riding bulls in the rodeo. He overcame the hurdles of parental abuse, religious extremism, and homophobia and learned that Truth is a concept of honesty rather than false righteousness, a means to live a life openly, for Terry as a gay man.

What listeners say about Cowboys, Armageddon, and the Truth

This autobiography of Scott Terry is shocking, sad, moving, and inspirational in parts. It is hard to believe that his "parents" could get away with treating him the way they did without someone blowing the whistle and actually making a difference. From the reports regularly in the news, unfortunately, things may not be so different today, though not necessarily down to the specific religion which basically is one of the main characters in the book.

Unfortunately what made this book very difficult to listen to was the woefully poor production of the recording. The narrator's voice changes in tone and resonance many times during the book, presumably recorded at different times of day, and after his voice may have been used for other things (see his blog for details!). I could have coped with that, as it is not that uncommon, but there are sections - especially early in the book - where the recording volume is at a totally different level from surrounding parts. Some sections are very muffled, In some parts you can clearly hear a lot of background noise. Pages turning are a frequent sound effect, and sometimes there is a slight pause in speaking while the page is turned!

Worse than than, though, it appears that nobody has actually listened to the recording before publishing it, because there are lots of mistakes and mis-speakings. I gave up counting and bookmarking them after a while! On at least two occasions, you hear the narrator speak a sentence incorrectly, say "hmmm", then repeat the line correctly. All of this is in the published version, for which we are paying good money - not really what we should be expecting.

If you are interested in the story, you may well do better to READ the book instead. Sorry to be so critical, but a story which I found very affecting was very much spoiled by the poor production of this audiobook.

Wow what a story.

Would you listen to Cowboys, Armageddon, and the Truth again? Why?

Definitely, there's too much in it to take it all in at one listen.

Have you listened to any of Jason P. Hilton’s other performances before? How does this one compare?

This was the first time I have listened to this narrator, however, before I finish this review, I have to say that I do not know Scott Terry, however, I imagine he sounds just like Jason P. Hilton. Jason’s voice was excellent for this narration as it gave me the feeling that I was sitting with Scott and he was recounting his story personally to me, a very nice feeling when listening to a memoir.

Just by the title I expected this book to be an eye-opener and I certainly wasn’t disappointed!

This is not a story for the faint hearted, it is gut wrenchingly frank and tells of a childhood that no child should have to suffer. Yet, it is written from the author’s own harrowing experiences, and this book tells of his childhood under the tyrannical reign of his stepmother “Fluffy.”

Scott and his older sister Sissy’s father is so besotted with his second wife that he turns a blind eye to the inhumane treatment of his children, and so they are afraid to put a foot wrong and suffered terrible abuse whilst growing up.

Rejected and unloved, he turned to religion for his salvation, and as a Jehovah’s Witness he was continually reminded that Armageddon was just around the corner, not allowed to celebrate many of the festivals his friends did and prayed daily for help and understanding as his sexuality bloomed.

This is a compelling read. The content is very sad, and yet the author tells the story of his childhood calmly, and without bitterness. His sexual preferences and coming to terms with them are graphically described in this no holds barred audiobook and he also offers an insight into the world of the Jehovah’s Witness, which those of us who are not one, do not realise.

I don't understand why this book has such glowing reviews. Both the book and the audio require editing.

The audio is full of errors that have not been deleted. The narrated stumbles over a line, repeats it, gets up, chairs squeak and so on. He appears to make clapping sounds that must be markers for the editing process, but that process never happened.

The text is composed mostly of very short little tidbits of a child's memory, told in chronological order, but without sufficient structure to engage the listener/reader. Inconsequential childhood memories about which raspberries are sweeter to pick are given equal (or even greater) space as the vignettes of child abuse.

I only got 2.5 hours into before giving up, and much of that time my mind wanders. This is almost half way through the memoir, yet he is only the 4th grade at this point. Up to this point, at least, the text is dense with detailed descriptions of things and people, lists of street names and so on, that apparently contribute nothing to the story. I got very bored, and only lasted this long because I was doing other things at the same time. Perhaps those who read the book skimmed through this stuff and it improves later, but that isn't really an option for audiobooks.

I'm sure that there is a great story here, but it needs an editor to bring it out.