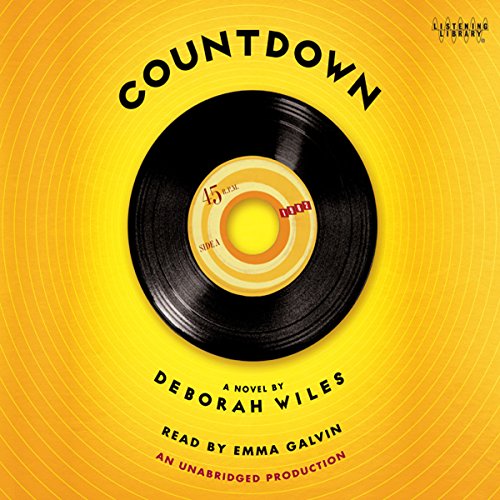 Franny Chapman just wants some peace. But that's hard to get when her best friend is feuding with her, her sister has disappeared, and her uncle is fighting an old war in his head. Her saintly younger brother is no help, and the cute boy across the street only complicates things. Worst of all, everyone is walking around just waiting for a bomb to fall.

It's 1962, and it seems that the whole country is living in fear. When President Kennedy goes on television to say that Russia is sending nuclear missiles to Cuba, it only gets worse. Franny doesn';t know how to deal with what's going on in the world - no more than she knows how to deal with what's going on with her family and friends. But somehow she's got to make it through.

A note from the author:
Countdown is a documentary novel. It contains scrapbooks with visual elements - photographs, song lyrics, newspaper articles from 1962, and more. I wanted readers to see young Franny's world, to feel it, to taste it, and I deliberately chose Listening Library to bring the scrapbooks and the story alive for readers by letting them hear what 1962 sounded like. I was totally blown over by this audio homage to the early sixties, as well as how faithful they were to the spirit of the scrapbooks, from the crackle in Khrushchev's long-distance transmissions, to the thrill of John F. Kennedy's rhetoric. From the crack of the bat and the swell of the crowd as Sandy Koufax pitched a no-hitter, to the ominous explosion of a nuclear bomb. Typewriters, air raid sirens, jaunty Duck-and-Cover jingles; it's all there, offering a world that the page alone cannot convey.

And then there is the marvelous Emma Galvin as Franny; a snappy, snazzy, and, above all, earnest young girl in love with the world, on the cusp of growing up, and hoping she lives to see that day. Pitch perfect.

"[T]he documentary format and personalization of the major events of the decade will draw and dazzle readers." ( School Library Journal)

A great story for young, and old!

This is a really good book! I may be bias, because like the main character Franny, I grew up in Maryland. My father was in the Air Force. And I can remember having complicated relationships with my friends. Because I love history, and history is so intertwined into this story. But it's more then that. It's a great story about a young girl who finds her faith in her family, and herself. I'm 49 years old, and I loved this book. I'm going to make sure I get a copy to my granddaughter. Kids of all ages will love "Countdown".

I listened to this, thinking this book would be good for my freshmen studying the Cold War era. It was fabulous. One of the highlights was the sound effects of the war -- ranging from the atomic bomb to old-fashioned filmstrip audio about how kids could "protect" themselves if an atomic bomb fell. Emma Galvin did a wonderful job capturing Franny's heartfelt feelings and misgivings, as well as the adventure story in her narrative. Interdispersed throughout the book were mini-biographies of leaders during the era. Deborah Wiles also captured the food, manners and bygone customs so well. I highly recommend this book for ages 10 and up. It is perfect for a history class studying this era.

What an unusual book.
1) The awkwardness of a young teenager growing up in the 60's,
2) The docu-drama pieces of what it was like to live through the Cuba missile scare, and
3) The hint of the civil rights movement that was about to surface
Characters are engaging and loved the narrator - her voice made the book a delight to listen to.
Highly recommend the book.

Countdown by Deborah Wiles is a fantastic book, any time you want to maybe get a little information about the bomb attack in the 1960s, this is the right book for you!

One of my favorite Audible books!

Countdown is a wonderful nostalgic historical fictional book about a couple weeks in a the life of an eleven year old in 1962 during the Cuban Missile Crisis. For Baby Boomers who remember Duck and Cover, your 5th grade crush, 45 rpm records, older sisters, younger pesky brothers and all the good and bad of our childhood this book is for you. The interjected news clips, songs, commercials and highlights from Bert the Turtle's Duck and Cover movie we watched at school make this a book that is much more effective listened to than read. I think this would be a great Book Club book to discuss with our fellow Boomers or for our adult kids who want to get a glimpse of what our childhoods were like in the 60's. There are definitely themes for today's world as well.

Although I wasn't born till 1965, and the story was based in 1962, I was able to relate to so many aspects of the story. Deborah Wiles did a wonderful job painting a picture of the times. I enjoyed this so much that I ordered the actual books (Countdown and Revolution) for my 13 year old daughter. I'm looking forward to listening to Revolution and the last book in the series when it's published.

A Memory Lane Stroll for Baby-Boomers

I'm not sure how this book would work by just reading it. Throughout the story are sprinkled old audio ads, pubic service announcements, and news reports from the 60s, particularly 1962.

Much of the point of the book centers around the nuclear bomb fears prevalent during that time, including the Cuban Missile Crisis. The story shows how kids lived back then, their games, their social interactions, and their fears. Born in 1957, I am about 5 years or so behind these kids, but I remember most of what is mentioned.

What did you love best about Countdown?

I love this book completely - the writing is smooth and inviting, the story is extremely realistic and the ingenuity of additional sound cues interjecting song lyrics, political campaign tropes and other nostalgic material very effectively sets the listener down into 1962. It's a masterful product and I recommend it to everyone, young or old.

This is an ensemble cast at its best. Ms. Wiles has done a remarkable job of making every character, indeed every word, meaningful to the story. I loved the opening event of schoolteachers not remembering the instructions for an air-raid drill and thus terrifying the children looking to them for guidance. Too true, still scary.

She seemed effortless, telling the story of how a group of elementary school kids lived day by day during October of 1962, not getting in the way with histrionics. The pacing of the text helped, of course. A fine job.

This powerful narrative turned me back into the scared 11-year old I was when the events were happening. I am grateful that 55 years later the bombs are still in their holding pens and diplomacy has kept the world intact.

Please do not let this audiobook languish in the Young Adult category. This is a wonderful novel brilliantly produced. It will remind those of us old enough to remember, and explain to those who aren't exactly how frightened the country, perhaps even all the world, was during this period. This is a superb presentation - I hope you sell a million and win awards to boot.

Apparently the print version of this book was published like a scrapbook with newspaper articles, ads,etc. between chapters. For the audio, there are excerpts from radio, TV, etc. As someone who is from the era (1962) almost the same age as the heroine, I did enjoy that, but I felt they went on too long sometimes and detracted from the story. I was bothered by the fact that the recordings were imitations of JFK, Walter Cronkite, etc., not the real thing. But I suppose it is too hard to get the rights to the originals. However, for the intended audience of young people (to whom this is ancient history), it's probably just fine. This might be a good book for a baby boomer parent or grandparent to listen to with a school-age child.

Personally, at 10 years old, I remember being totally uninterested in the Cuban missile crisis even though our teacher told us to watch the news at home. I only realized later what a dangerous time it was. In the book, the main character is from a military family, so it makes sense that everyone is very aware of the threat.

The narrator does a good job with the girl's voice, though sometimes it seemed the words the author supplied were too sophisticated for her age, even for someone who is an avid speller and wordlover.