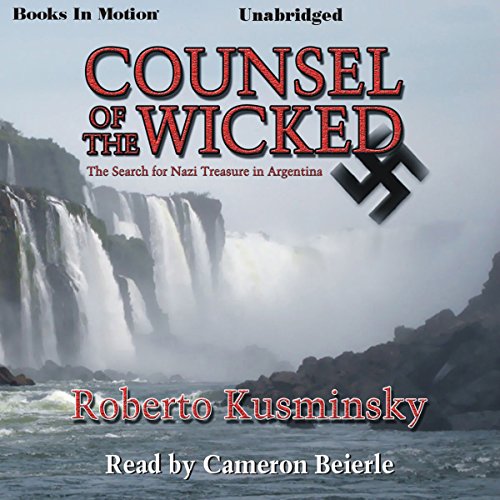 Counsel of the Wicked

Counsel of the Wicked

During and after World War II, Peron allowed thousands of fleeing Nazis to find refuge in Argentina. U-boats were sighted near coastal towns, and priceless works of art stolen from European victims of war appeared surreptitiously in Buenos Aires auction houses.

Dr. Gerson Asher, a surgeon with a past, and Nicole, a beautiful geneticist, plunge into a deadly cat-and-mouse chase with a ruthless art dealer who is intent on recovering treasures looted by the Nazis and hidden in South America decades earlier. Gerson follows cryptic clues left by Max, his grandfather, who is murdered just before he can tell Gerson the  shocking discovery he's made. The vertiginous chase becomes increasingly treacherous as Gerson and Nicole try to evade the members of an organization bent on recovering what they believe to be rightfully theirs.

This is a very good thriller. However, the reader is awful. For one thing, he uses a mincing little voice to indicate female speech which is very annoying and gives the listener an impression of a weak person rather than a feminine voice. Secondly, he has a strange habit of pronouncing 'a' as AY when usually it would be UH. After a bit, this grates and sends you crazy. Further, he has not done his homework and falls down on placenames. Bariloche in Argentina is bari-lochay (ch as in church) he says barilosh. I will avoid this reader in future.

I wish I could rate the story and the narration separately. The story is excellant - a complex, thriller that is, unfortunately, largely ruined by Cameron Beierle's totally inept narration. As a long-time Audible member, I have to say this is the worst narration I've ever heard. Think John Wayne as Genghis Khan. Wooden, lacking inflection, pauses in the wrong places, no pauses when there should be, stilted pronunciation...... etc etc etc. I thought maybe the narration would improve as he went along, but it has not. Example: His pronunciation of "operative" is "op-era" pause "tiv". It's unbelievable that the publisher accepted this debacle. My sympathies to the author.

What a shame - such a godd story so badly narrated! I had to stop listening, completely annoyed by this amateurish performance. Sorry, Mr. Kusminsky, you don't deserve what happend to your book - I buy the printed version to finish it!