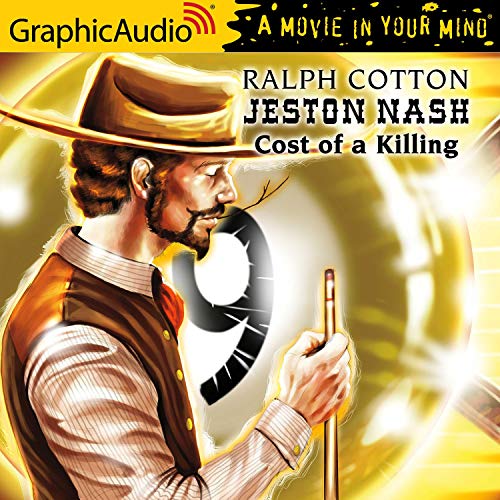 Cost of a Killing [Dramatized Adaptation]

In a hail of thunder and gunfire, Jeston Nash fled a new Orleans billiards hall with a land deed in one hand, a blazing pistol in the other. He'd won his gamble with Quick Quintan Cordell fair and square. But in seconds, violence flared, Cordell lay dead, and Sheriff Pat Garret's voice still rang in Nash's ears...somewhere, someday, they would meet again....

Jeston Nash learned about robbery from his cousin, Jesse James. But it was the wild outlaw Billy the Kid who taught him that even a wanted man is just a man. Nash catches up with the kid in a dusty town of drunken bottle-shooters. Along with a scraggly band of gamblers and gunslingers, they ride for New Mexico, where for Billy the Kid, freedom lies just beyond the border.

For Nash, the enchanted land holds the chance to exchange his hard-won land deed for the hauntingly beautiful and seductive Contessa Cortez. But their dreams turn to dust in the face of revolutionists, scalp hunters, and the deadliest threat to of all - the determined Sheriff Pat Garret, who plans to take Nash down with the Kid, all in the name of justice.

What listeners say about Cost of a Killing [Dramatized Adaptation]