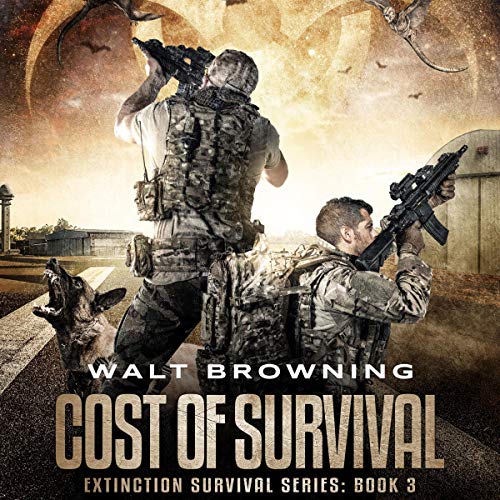 By: Walt Browning
Narrated by: Bronson Pinchot
Try for £0.00

Fear does not stop death. It stops life.

John Eric Carver and Shrek have fought their way through a viral apocalypse and into the aftermath. Working with 50 other survivors in the remote mountains outside of San Diego, they have created a community safe from the monsters called Variants. But outside their small haven, giant packs of the beasts roam the cities in search of humans to feed their insatiable appetite.

On a supply run, Carver and Shrek encounter several of these packs before they make a startling discovery. Some of the Variants are mutating from the release of radiation on a naval vessel, transforming the crew into abominations that can fly. Carver knows these new mutations threaten their home and survivors around the world.

Once again, the retired war dog team heads out to fight what they fear the most to protect the lives of those they love. But this time the enemy is more cunning and evil than ever before. It will take more than bullets to stop these beasts.

What listeners say about Cost of Survival

This could be a good story. But the narrator is so sub standard, I don’t understand how this performance got past any editor.
He voices all Women as wilting fragile flowers.
Somehow every single character has the same voice. Every woman whispers instead of speaking even in high stress situations.

Let me say, I was hooked by NSS’s series, and often wondered while reading, “what else is going on elsewhere, on the west coast” or whatever. Well, now I know! I loved the storyline and the characters. MSGT Beckham(Beckham Hall at Lost Valley I assume is named after him to tie the series together) captured my attention in the NSS series!
Now, CPO Carver & Shrek are a fantastic team as well as MCPO Shader ,aka Porky, adding the right amount of true military sarcasm, just picks right up with the variants/zombies and depicting them the same in their evolution was great. I highly recommend this and the other series if you enjoy the genre. I will continue to be a fan and wait for more from these authors!!

The storyline holds true to the series.

Bronson Pinchot again does an excellent job on narration.
Walt Browning does an overall good job on the writing. What I did find wrong was the use of the word soldering metal together instead of welding the pieces. Heck even using one of the quick acting epoxies would have been a better option. Soldering is just too weak, godd for electrical connections and soldering connections and electrical components to Motherboards.
Even a Black Out 300 makes noise granted a lot less than a 5.56 or a 308 but suppressors are not silencers.
I did enjoy the book and now have all three Audible books and yes one needs to start with book one, then go on to book two. So that you can fully enjoy book three.

Walt does an amazing job writing in this universe. All three books are amazing. Shrek is awesome, I hope Mr Browning writes 10 books in this series. You won't be disappointed.

It hurts to say this.

I love the entire variant saga world thing ,all the storys have been great but this one was different. Alot of it has to do with the authors choice to make so many people do such idiotic things an i hate to say it but the story was horrible causing the narrator to suck as well .like i said i love the series an the narrator in all past books but this one was a huge fail to me .

I was not a fan of the Extinction books until l landed on Shrek and Carver. Love it

Another in a very good series. I love Shrek, the ghost in the night. The three primaries in this book don't disappoint. There are times when the dialog runs on and is boring. Other than those times the story is exciting, thought provoking and just plain fun. I am looking forward to the next chapter in the struggle for survival against the king variant as well as the offspring from Schrek, Carver and the rest coming in to their own.

Get em Carver and Shrek

Just fantastic! entertains from start to finish. I enjoy every minute that I am immersed in the Extinction Cycle series. Walt Browning has made me a loyal follower of Carver and Shrek! I especially enjoyed Bronson Pinchot's narration of Shrek and how Shrek would mention Nicholas S. Smith's Apollo.

The story, in it's third installment, was very good to say the least in rounding out some characters and storylines in what is likely to be the final pages of this great work.

Having said that, Bronson Pinchot's performance was absolutely superb, almost flawless, as he nailed every inflection of every tone of every character's voice inflection. In a word, amazing!

THIS BOOK IS WORTH THE PRICE OF A CREDIT OR MONIES!!!

Was nice having Carver and Shrek back again. This story is face paced with more great characters added to the mix. I can’t wait to see what comes next for this series.

Survival of the Fittest at its Best

Although this book doesn't show any if the bugger picture if what is going on, the characters are relatable, loveable and unforgettable. I love this zoomed in view of the Extinction World. Shrek is an all time favorite character.