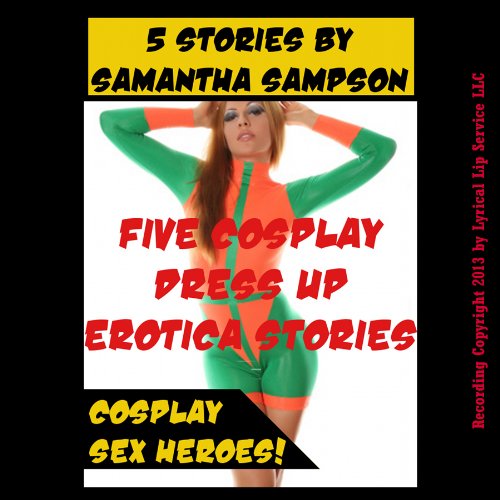 By: Samantha Sampson
Narrated by: Jennifer Saucedo
Try for £0.00

Best-selling erotica author Samantha Sampson knows how to write about sex in costume, and in this collection of five stories, you'll find beautiful girls dressed up as superheroes! These aren't just any superheroines, though. These girls may have sprung right off the pages of action comics, but the kind of action they're about to get is sexy as hell. With plenty of stranger sex, rough sex, and sex in public; this collection is sure to please.

You wouldn't know from looking that Katrina Harper was a comic book fan, but one look at her outfit when she goes to the convention, and anyone can she she's not only a fan but one hell of a sex fan! This year, she goes as Bright Spark, the sexy superheroine that really gets the electricity going! Sparks certainly fly when she heads home after the convention and her boyfriend discovers her secret cosplay life! It's a rough sex encounter for Bright Spark!

Candy is excited about the upcoming fetish ball, and she's worked hard on her costume to make it just perfect. She's going as Crimson Carla, the badass woman warrior superhero who never fails to win. When a stranger approaches and bests her in battle, though, she has to submit to his every desire, and in this case that means bondage and rough sex right in front of everyone!

3. HONEY BADGER GETS IT HARD (A Cosplay Sex Erotica Story)

4. THE CAT BURGLAR GETS CAUGHT (A Rough Sex in Public Erotica Story)

5. THE WITCH OF THE WOODS GETS WORKED OVER (A Rough Sex Cosplay Erotica Story)

Claire finally gives in to her husband's incessant bugging and while he's busy at the comic book convention, she dresses up as his favorite superhero, the Witch of the Woods. As far as Claire's concerned, the whole comic book scene is silly, and he only likes the Witch because her outfit is so sexy. Fine. She'll dress up for him and have sex with him that way. Only Eric has different ideas! She can't just dress like the Witch; she's going to have to pretend to be the Witch. That means Eric is going to punish her for all of the Witch's haughty arrogance! The usually gentle Eric is ready for bondage and rough sex!

The sex is fairly well written and, given that I paid almost nothing for these five short stories, I can't really complain much. However...

There's no imagination to these stories. You could do so much with the cosplay concept and the author really just doesn't bother. 50 Shades has raised the bar on what we can consider "vanilla sex" so I have no qualms about saying that the sex in these is distinctly vanilla. While the stories are described as "rough cosplay sex," in practice they aren't really rough and the cosplay is entirely incidental.

Not too bad, really, and cheap, but you get what you pay for.