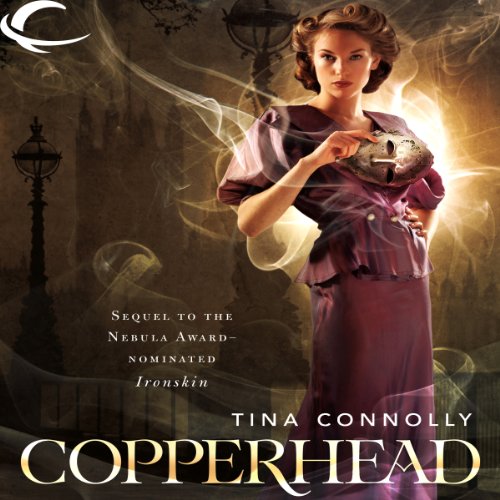 Set in an alternate version of early 1900s England, Copperhead is the sequel to Tina Connolly's stunning historical fantasy debut. Helen Huntingdon is beautiful - so beautiful she has to wear an iron mask.

Six months ago her sister Jane uncovered a fey plot to take over the city. Too late for Helen, who opted for fey beauty in her face - and now has to cover her face with iron so she won’t be taken over, her personality erased by the bodiless fey. Not that Helen would mind that some days.

Stuck in a marriage with the wealthy and controlling Alistair, she lives at the edges of her life, secretly helping Jane remove the dangerous fey beauty from the wealthy society women who paid for it. But when the chancy procedure turns deadly, Jane goes missing - and is implicated in a murder.

Meanwhile, Alistair’s influential clique Copperhead - whose emblem is the poisonous copperhead hydra - is out to restore humans to their “rightful” place, even to the point of destroying the dwarvven who have always been allies.

Helen is determined to find her missing sister, as well as continue the good fight against the fey. But when that pits her against her own husband - and when she meets an enigmatic young revolutionary - she’s pushed to discover how far she’ll bend society’s rules to do what’s right. It may be more than her beauty at stake. It may be her honor...and her heart.

What listeners say about Copperhead

This was a pretty good book. The narration was great. I thought it was better than Ironskin, which is the first book of this series. I liked the main character better in this book as well. The whole book was just more fun and adventurous.

Appearances can be deceptive.

There are two sisters. Jane was wounded in an invasion by the fae, and now suffers from a disability in which she is cursed by a supernatural anger, and is a constant outsider, and goes to work as a governess in what appears to be a haunted house in the countryside. Helen is beautiful, married a wealthy aristocrat, and is obsessed with society and its balls and fashions.

If you’d asked me which sister I’d rather read about, I wouldn’t have thought twice. Jane sounds far more interesting and engaging. And I did enjoy reading Ironskin. So much, I listened to it as well. So you can imagine my surprise when I loaded Copperhead onto my phone and enjoyed it even more. But like I said, appearances can be deceptive.

Jane disappears from Copperhead early on, while attempting to help convince some of the most prestigious women in society that they have to do away with their fae-glamoured beauty. Helen is forced to take over after Jane’s disappearance, to track down the women, and convince them of the danger they’re in. A nice twist – some of the women Jane and Helen have to convince are using their supernatural beauty for good – such as celebrity-like spokeswomen for charitable causes.

Copperhead largely shifts the conflict and villainy away from evil faeries to a conspiracy of prominent men in society. Helen’s husband is one of these prominent men, though thankfully less of a moustache twirler, and through Helen, we see this group of society (known as Copperhead) do their best to increase their power and retain privilege – mostly by stripping it away from other groups. Women, in particular.

Something I liked about Ironskin was that Jane was essentially a character struggling with a disability, and that anger was eventually portrayed as something that could be righteous. Copperhead is equally infuriated by injustices perpetrated against women – and specifically married women, reminding us that the playing field isn’t been equal. What I appreciated most about it, though, was that it makes plain that women don’t have to be physically tough and abhor pretty things to be a strong. Helen is an incredibly likeable character I loved getting to know – one who is so much more than meets the eye. All the conflict, wit, desire, and guilt hidden beneath the surface make for a rich character I’d be happy to read more about.

Rosalyn Landor returns, and does a very fine job with the narration, and it seemed had more fun with the story Connolly told this time out. This is partially helped by the supporting characters – but it was in particular fun to hear Helen make friends with Frye and Calenduala, as well as Rook.

Copperhead’s romance is both more playful and natural, the supporting characters are more fun at drunken sleepovers, and the adventure isn’t afraid to revel in its own glamour and beauty. Like it’s protagonist, there’s much more happening beneath the surface of Copperhead than what we might’ve initially been led to believe, and it makes me very eager for what Connolly will do next with Silverblind (the final book in the trilogy), and beyond.

(Originally published at the AudioBookaneers.)

Tina Connolly writes a magical but realistic world and Rosalyn Landor brings the characters to life.

The best of the series

I absolutely love how we witness 19 year old Helen go from an empty headed bimbo to a leader of an uprising. Jane is flattened by comparison and I was shocked but the author explains this well enough. Eduard and Dori could have been less flat though... I think that they could have played a larger part since one was the Fey Queen’s Consort and the other their child.