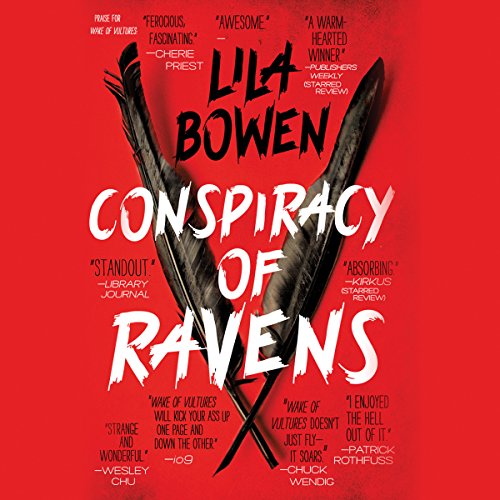 Supernatural creatures create chaos across an unforgiving western landscape in the second audiobook of a propulsive and cinematic fantasy adventure series that began with Wake of Vultures.

Nettie Lonesome made a leap - not knowing what she'd become. But now her destiny as the Shadow is calling.

A powerful alchemist is leaving a trail of dead across the prairie. And Nettie must face the ultimate challenge: Side with her friends and the badge on her chest or take off alone on a dangerous mission that is pulling her inexorably toward the fight of her life.

When it comes to monsters and men, the world isn't black and white. What good are two wings and a gun when your enemy can command a conspiracy of ravens?

"Bowen's writing is as sharp and superior as ever - her examination of Rhett's growing and complex sexuality and gender identity is wondrous, and is a topic that is truly not being explored anywhere else." (RT Book Reviews)

"Wake of Vultures is, quite simply, brilliant. A mind-bending mix of history, fantasy and folklore, it's a wild bronco of a read that'll leave you breathless for more." (Rachel Caine, New York Times best-selling author)

What listeners say about Conspiracy of Ravens

Amazing reading of an underrated classic

I've listened several times to the two books in this excellent series that have been recorded. They're so much fun, the characters are great and Robin Miles as always does a brilliant job reading them. Sadly it seems the publisher decided not to go ahead with recording the rest. I'm really unhappy about it. Still, even if there are only the 2 books to enjoy in this format, they're well worth it.

Conspiracy of Ravens unfortunately doesn't compare to the first book's potential. Instead of Rhett/Nettie growing with his/her new found abilities, responsibilities and relationships, we get snide pettiness, arrogance, ingratitude and stupidity. The reader gets to hear about how proud Rhett is to be made a scout as he goes on and on (and on) about how important it is to be a leader, then returns to the camp fire and picks a fight with anyone trying to offer advice on how to take out the sorcerous villain that owns the railroad. Rhett won't even listen to Earl, who's helped her learn to remember what she sees as The Shadow _and_ has first hand experience of the railroad camp. Instead, per usual, Rhett storms off unprepared and without a plan.

The narrator does a good job, which makes listening bearable. Despite Robin Miles' best efforts, I find myself rolling my eyes at the contrived situations in the story and the limited emotional range of Rhett/Nettie. I have about two hours left to listen to and now, to add to the MC's lack of character development, Mary Sue elements are popping up. Here's hoping it won't end deus ex machina.

Loved the first one; this one not so much.

The narration remains wonderful. The last half of the book didn't feel well thought out. I stopped caring. There is a scene in the middle that I loved and an interesting character from that scene may cause me to get the next book.

Lives up to the hype!

Excellent supernatural mysteries with excellent plots and MC'S. This is dark! Superbly wriiten and performed. Love this series!

A solid followup to Wake of Vultures

Conspiracy of Ravens seemlessly picks right up where the first book in the series, Wake of Vultures, left off.

Nettie, now Rhett, continues his quest as both the mysterious Shadow and a Durango Ranger: "killing what needs to die." This time, he crosses paths with a cantankerous Irishman, the mysterious "Buck," and an unspeakably ruthless railroad proprietor with a talent for alchemy and torture.

Rhett's journey is one of justice and revenge, but it is also one of personal discovery, as he learns more about who -- and what -- he is, and what he wants. Like in Wake of Vultures, Lila Bowen gives us a story with plenty of diversity and depth, and a core group of good, solid characters who remain endearing and tenacious, even among the unsavory folk of Durango.

I was very excited to see that Robin Miles returned to narrate this book. Once again, she completely kills it.

I'll be looking forward to the next book!

In my opinion, what the writer does well: setting, dialogue, original ideas, action. I love the southwest I love the idealized version of Miss Bowens Southwest who can resist gunslingers and monsters?
What I found distracting was every once in a while Mr. Wen would slip and use modern terms. Also she made it a point to tell us that the protagonist is on school and yet she’s vocabulary that should be beyond her. All of that is rather minor. The biggest problem I had with these two books is the writer has the protagonist say “goddamn“ Too often. You are a lighter, use another episode. They had more than one curse word that in those days. Not understanding my religious believes, the repetition of this word over and over bogs down the dialogue which was otherwise excellent. If you guys don’t read for content in mechanics like I do, and you like this genre, then young no doubt give it more stars than I did. This has nothing to do with the writer, but I’m upset that I could only get the first two on audible. I am visually impaired so unless something changes, the story ends here for me. Happy reading!

Was GD necessary that much?

I really like these books but saying godamn so much was distracting and not even applicable some times. I loved Deadwood but when Al S. swore it seemed real.

Please get the rest of the series

I’m not much of a reviewer but I have been an avid listener since 2008 and I wanted to state that I really enjoyed this book and the previous one. I absolutely love the western fantasy mix ( dark tower series my most favorite). Then throw in the gender/sexuality theme!! I’m loving it. I very much hope audible gets the rest of the series.

Worth the time in all the ways. Great story, characters, delivery—the whole shebang. If you’re on the fence, read this book (after you read the first in the series.)

This second book was even better than the first! An interesting old west meets sci-fi series. If you want something new and different to listen to, This series delves in to humanity, the struggle within ourselves and then straight out monsters - what more could you want!? I know this is rather vague, but this series is very hard to describe. There are 2 more books that are not on audible and all I can say is I WANT MORE PLEASE!!

A great book. Well written, with the writer staying very true to the characters. Well read!