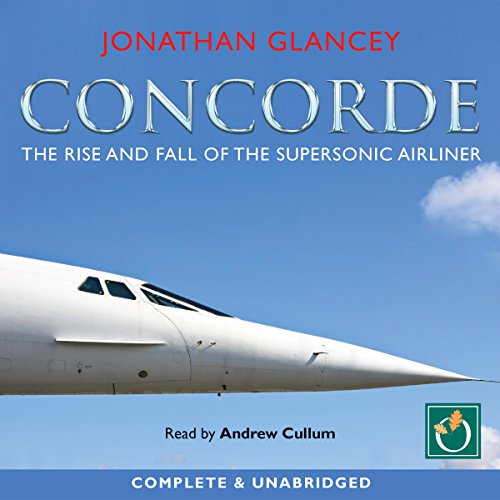 By: Jonathan Glancey
Narrated by: Andrew Cullum
Try for £0.00

In Concorde, Jonathan Glancey tells the story of this magnificent and hugely popular aircraft anew, taking the reader from the moment Captain Chuck Yeager first broke the sound barrier in 1947 through to the last commercial flight of the supersonic airliner in 2003.

It is a tale of national rivalries, technological leaps, daring prototypes, tightrope politics, and a dream of a Dan Dare future never quite realised. Jonathan Glancey traces the development of Concorde not just through existing material and archives but through interviews with those who lived with the supersonic project from its inception.

"A thoughtful hymn to a great symbol of the analogue age.... Concorde will be the standard long read on the subject for a good few years." ( The Times)
"What Jonathan Glancey likes about Concorde could probably fill several books.... His history of the Anglo-French supersonic airliner is nevertheless engaging, tracing the arc of Concorde's rise in the 1970s, an unlikely triumph of engineering and international co-operation, through to its decommissioning in 2003.... This is an enthusiast's book, but a good one." ( Financial Times)
"Jonathan Glancey is eminently qualified to write a history of Concorde.... He fully appreciates the aesthetics and science of aeronautical engineering, and the lucidity of his prose makes his complex subject clearly comprehensible." ( Spectator)
"How welcome it is to see a specialist book from someone who can write.... What might appear to be yet another book on this widely exposed aircraft is actually one very much worth reading." ( Pilot)
"Glancey skilfully tells the tale of a plane forged from a great trans-national alliance, and how it eventually fell from sky, taking with it - perhaps temporarily - the dream of a world shrunk small by the sheer force of technology." ( Wallpaper)

What listeners say about Concorde

I really enjoyed the first two-thirds of this book, and it was insightful and interesting as I'd hoped it would be. That was, until the chapter when Concorde crashed, after which the tone gets very bitter, as the author is angry at seemingly everything, from the accident, to terrorism, then to Airbus, Boeing, phones, IPads, and technology in general, blaming technology for ruining air travel ...which was responsible for making it - and Concorde - in the first place.

Unless you want to listen to a bitter, angry author spill his issues about everything that he claims has ruined the world since the last flight of Concorde, and feel patronised and belittled for listening to this audiobook on such a device he repeatedly berates the public for "being glued to", I'd recommend you stop listening after Concorde retires.

Because up until then, it really is a very good book.

This book lacked focus. There's little detail on Concorde's development and it wandered pointlessly into all kinds of random stuff before ending on an almost surreal note with an epilogue about Bristol cars!

Very well narrated but sometimes went off topic. overall enjoyable listen and I would recommend.

Disappointing that so much time is off topic

The book explores the social context of the period. Not for the Concorde fan.

Has Concorde put you off other books in this genre?

Fascinating but does go off piste quite a lot.

Lots of detailed information here. Story goes off piste quite often and the chronology darts about but overall a good listen

Too much moaning about other things.

I like Concorde and wanted to hear the full story, problem with this book is how the author criticises the world and makes sweeping generalist statements about people. I love engineering and also modern technology! My first disappointing book on Audible.

They'd probably need to have an interest in the topic, but it's well narrated and a pretty interesting story.

He's not nasally American for a change! :)

But didn't expect to be with an aeroplane story!

Goes off on a few unrelated tangents to drag it out for 10 hours. But it's an interesting story, well researched and narrated that certainly offers some facts about the development of Concorde I wasn't previously aware of.