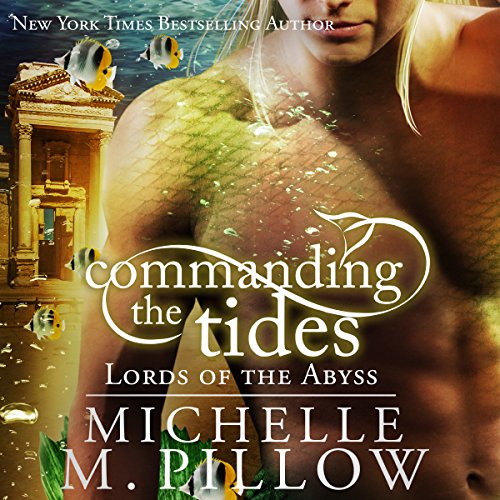 Terminally ill, Cassandra Nevin has come to the ocean to live out her days on a boat with a bunch of scientists who don't even know she's sick - or that she's not even a scientist. When something from the depths of the abyss attacks their boat, leaving her to drown, she knows it's her time. But then the unimaginable happens - she lives.

Iason the Hunter doesn't understand why the woman he's trying to save from death seems insistent he save anyone but her. Duty bound to try and rescue whoever he can; he takes the woman into Deep Ocean, to his home beneath the waves. But it would seem a watery grave wasn't the only thing threatening his new charge's life. To try and save her from her illness would mean possible disgrace and being banned from ever swimming in the ocean again. But what else can he do? From the first moment he saw her, she had command over his heart.

What listeners say about Commanding the Tides

she has better series. I actually had to stop reading until the last chapter. I don't enjoy listening about woman trying to be dominant to men. not my thing.

Loved this book, sexy hot, exciting and very well written. I enjoyed listening to this narrator very much, she was clear, concise and the changing of the tone of her voice was excellent. I would recommend this book to anyone over the age of 18.

This series has me hooked. The characters and the search for modern knowledge has me wanting to read the whole series. l hope the king gets his turn though. well narrated with a lovely voice.

The series gets better

OK, I like this one a lot more than the first and I really liked the first one! The protagonist is much more likable and relatable, at least for me. The story is also more interesting because the main character is dying of cancer when she gets rescued by her merman. I also enjoyed seeing the Olympians again as well as how the first book’s characters tied into this one. Instead of taking place after the first book, it takes place right alongside it and ends in almost the same location. My only major question is who the heck was knocking on the door at the end!? How could you end a book like that!? It seemed downright unfinished. So, needless to say, I’m definitely starting on the next one immediately. Finally, I have to say I like the narrator a lot more in this one as well. I didn’t care for her voice as much in the first one, but, as I suspected was potentially the case, the main issue was the way she read the protagonist in the first book. So it’s really just that the protagonist was annoying. In this one, the voices she uses for all the characters are believable and engaging. So, five stars! All around.

Listened to the story on Audible. The narrator did a great job. She has good emotion in her voice, and she gets into the performance without going over the top. Entertaining premise with the Mermen, and I love the underwater setting. I really enjoyed the first book in this series, so I was excited to continue on with book 2. I was really enjoying the story and the characters, but then the female lead, Cassandra, started being a moron. Cassandra and Merman Iason had good chemistry; which is good since there is plenty of sex scenes in this story, but I would've liked a bit more depth to the romance. Good passion between them, but the connection in other aspects was missing. Still some hot stuff though! I did feel like Cassandra didn't really care for Iason most of the time; she was just thirsty for some lovin, it made her come across as selfish. She also doesn't even think about the sex slaves being kept prisoner by those skeezy Mermaids; how about sending some help to save them. It would be a great way to add some more action to the story. Iason is great and I loved his protectiveness; he's a sweetie. I gave book 1 a 4 star rating, so I went with a 3 for this one because I enjoyed book 1 more. The ending needed a bit more too. Overall, there's some unique, fun ideas, and the story is interesting. I'd like to continue with the series and read about the other Mermen finding love!

From beginning to end the author does it again. Love the story line on this one. Very hot and romantic. Narrator does a great job.

This was another great book in this series. It’s hot, funny and emotional. Cassandra gets her man in this book and in ways finds it easier to accept where she is at. I look forward to listening to the other books in this series.

Enthralling from start to finish

this book it now at the top of my list of the funniest books I have read. I loved it. Full of humor, flirting and funny other worldie missunderstandings lol yeah this book is great. And the prince? I would have taken in up in a heart beat lol. Miss pillow has out done her self with story. I could not put this book down. And when i can to the end i sooooo didn't want it to be over it was that good. So if you love shifters and romance with tons of humor then this book is for you. 😻