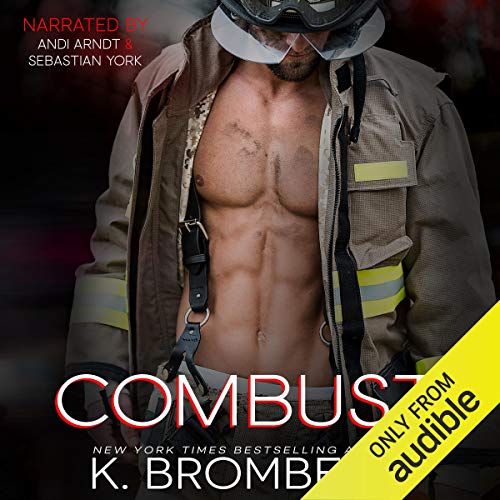 By: K. Bromberg
Narrated by: Andi Arndt,Sebastian York
Try for £0.00

Songwriter Dylan McCoy has been burned.

By her boyfriend she found in her bed...with someone else.

By the contract she signed that obligates her to work with him until the songs for his new album are complete.

By her agent when she asked Dylan to keep their breakup on the down-low.

When she finds herself in Sunnyville, she refuses to let her new roommate burn her too. Still...a rebound has never looked so good.

That's her first thought when she sees firefighter Grady Malone. Sexy. Charismatic. Unapologetic. He's a man who carries his own scars - the ones on his back, the survivor's guilt on his soul, and the fear in his heart.

When an unexpected visitor puts their roommate status to the test, will their undeniable attraction burn out, or will they both take a chance and play with fire?

What listeners say about Combust

loved everything about this series

Brilliant narration as always by these two.
loved the firefighting theme.
great continuation of 'Cuffed'
I'm a little in love with the lead characters.

I enjoyed this book. Respect to all firemen!!!! I truly appreciate firemen but after listening to this book I am seeing things differently! Fire fighters are truly heroes. To all fire fighters out there - respect and pure appreciation. This was a real story with twists and turns and just brought joy to my soul. Yes- pure joy! I only buy books narrated by these 2 - so I can enjoy a good listen. They brought life to this story. Awesome!! I will listen again and again and share.

very enjoyable listen which was sad at times but also funny ..especially when the two main Male characters first meet.. I just love these narrators they really make the story come alive.

Another great read by K. Bromberg from the Everyday Heroes series. A great way to honour our Everyday Heroes and the people whose job it is to keep us safe.
K. Bromberg - you rock!!
A brilliantly narrated/performed story by, in my opinion, two of the best Narrators there are.
I strongly recommend this book to other readers. Predominantly a love story, with a HEA ending thrown in.

Wow another brilliant book by K Bromberg , these books are just excellent and as always the narrators are absolutely brilliant.

I liked it so much! I really would like it existed something similar in the paranormal series.

I found this story very gentle & sweet, it’s very well written but not as sexy in content as other books by the author.

Who does not love to hear Andi and Sebastian read? I loved how they made Grady and Dylan come to life in this story. One of my all time favorite series.

This book was so good! I listen to books while I work, but this one I continued at home too.
Although I think you should read the book “Cuffed” first BC it’s really the first book in this series.
Would recommend both books!

Such an amazing story about a sexy, damaged fireman and the woman who makes him whole. Although, personally, the pig stole the show for me! I love that pig!!!!! Want to know what I'm talking about? Your going to have to listen for yourself to find out!

The narration was great, Andi and Sebastian always make a great team.

This book hit all my hot spots! It had well developed characters that you couldn't help but fall in love with, Flaming Chemistry, and a sweet sweet love story! I loved every second of it~

Andi and Sebastian gave a wonderful performance. The narration was spot on and so yummy.

I had absolutely no complaints! Will highly recommend.

Loved this book! This book takes you on an emotional journey with two broken souls as they find the strength to heal in each other. It is sweet, sexy and smokin hot. This story was brought to life by Andi Arndt and Sebastian York's phenomenal narration. They have you laughing, crying and most definitely leave you swooning!

Loved it! This is definitely a Must read! Believe me you will not regret it!

You know what I love about K. Bromberg? She can give us a great realistic love story. Don’t get me wrong, romance books where billionaire men fall in love with a regular girl can fulfill your HEA craving momentarily but it’s stories likes these that stay with you forever. Realistic characters, with regular houses/jobs and real insecurities make relating to these stories easier. Knowing that we all have insecurities and when you find that one person who thinks you’re perfectly imperfect is something we all hope for. Thank you for giving us respectable male leads and strong female characters. This is a beautiful emotional roller coaster I’d be happy to ride again. P.S. Sebastian York and Andi Ardnt rock!

Well, well, well, K. Bromberg does it again. She sucked me in from the first line to the last.
I was a little iffy going into this book because I am freaked about fire, always have been probably always will be. And seeing it on TV or reading about it gives me the willies. Butttt I couldn’t resist this cover!!

Grady is smokin' hot and still sweet, I really loved that his friend asked him for help and he was like sure your sister can say here no problem. That just goes to show you he is a really great friend.

Dylan is sweet and totally nursing a wounded heart. But I think getting to see Grady and his circle of friends helps sooth that heart just a little. Who can be sad when you have a bunch of good-looking fellas around.

Their friendship really does pay a big role in how they become more and it is sweet and sexy all at the same time.

And hellooooooooo SebYo is the voice of Grady… Enough said! ;)