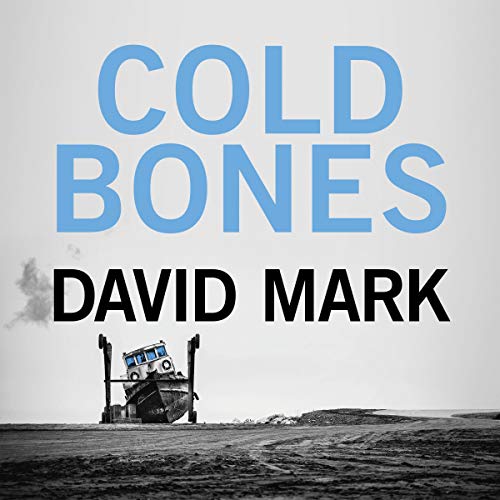 By: David Mark
Narrated by: Toby Longworth
Try for £0.00

It's the coldest winter in Hull for years.

When McAvoy is told by a concerned stranger that an elderly woman hasn't been seen for a few days, he goes to check on her - only to find her in the bath, encased in ice: the heating off, the windows open, the whole house frozen over.

It could be a macabre accident, but when McAvoy finds a series of cryptic messages, he senses murder. Someone watched her die.

As he starts to uncover the victim's story and her connections to a lost fishing trawler, his boss Trish is half a world away, investigating a mysterious death in Iceland. Hull and Iceland have traditionally been united by fishing - in this case, they are linked by a secret concealed for half a century and a series of brutal killings that have never been connected.

Until now - when the secrets of the dead have returned to prey on the living.

What listeners say about Cold Bones

Another amazing novel from David Mark. The narration is excellent. Can't wait for the next one. great characters and wonderfully crafted plots. excellent.

Given this is the 8th book in the series, I’d really like to know why the narrator - who is good otherwise - is still mispronouncing Anlaby! It is not An-lay-bee, it is An-luh-be. There is no recognisable Hull accent for any of the Hull characters, and it would be highly unlikely for an old Hessle Roader to be red and white!
I know I’m being picky, but if you’re going to set a story in a particular city or area, you really should pay attention to the details, and the narrator to the local accent.
I found this book darker than the previous books in the series (though none of them are what you’d call feel good beach reads) and really enjoyed the unusual storyline. Bringing in the city’s fishing heritage the way the author has was very good, and was not the usual “oh wasn’t it grand back then” nostalgia.
Not perfect by any means, and I do get a bit sick of Aector’s indecisiveness at times and want to slap him, but enjoyable and I’ll be keeping an eye out for the next in the series.

I struggled to finish this. It didn't keep my attention, sadly I kept falling asleep

Superbly written and narrated.. have already downloaded the next one as I feel l know the characters & need to know the next thriller that David Mark has created right away ..

I’ve listened to this whole series but I just kept switching off as to wordy to actually listen to story. Far far too descriptive re every little thing to such an extent that I couldn’t follow who was who or the story

I thoroughly enjoyed this book. A very entertaining story with many twists and turns, it kept me listening to the end. Expertly narrated using a range of authentic accents. Recommended.

I have all these macavoy books but this I feel is a let down.
I love the main characters and narrator top class it’s just the story was boring and predictable.
I’d like to see more from the group around macavoy just make it a bit like MacBride books develope the characters around the main ones and make the story’s longer.if it carry’s on like this then I’m starting to have had enough.the kid is cool the wife seems predictable.i don’t know

As usual a beautiful twist to a thoroughly beguiling plot. Just when you think you’ve got it all straight then comes the epilogue. David Mark you genius!