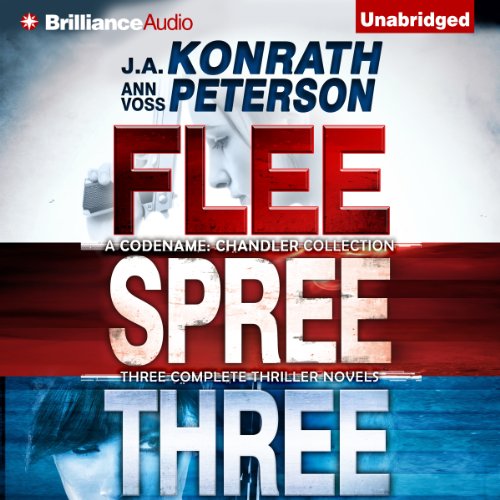 By: J. A. Konrath,Ann Voss Peterson
Narrated by: Angela Dawe

This is a special edition of the first three novels in the Codename: Chandler series.

Chandler isn’t a person; it’s the codename for a woman who was shaped from a raw military recruit into a living weapon. She’s an assassin without remorse or fear, doing the bidding of an agency so secret that only three people know of its existence. But when her cover gets blown, she becomes the target of a wide-reaching conspiracy led by a mysterious figure whose connection to Chandler goes far beyond what she could have imagined.

Now she faces an explosive twenty-four hours—a single day in which everyone she encounters seems hell-bent on ending her life. With any past ally suddenly a possible traitor and every present emotion a weakness for her enemies to exploit, Chandler must tap into her deepest reservoirs of strength and skill in order to survive. But her survival is just the beginning as she confronts a murderous lunatic with a personal agenda, a squad of assassins just as skilled as she is, and a diabolical plot to unleash nuclear holocaust across the globe.

Super spy and assassin Chandler has just barely averted nuclear annihilation when the very organization she works for has her brought in on treason charges, trussed up for interrogation. After a run-in with Chicago Homicide cop Jack Daniels, Chandler discovers one of her sisters, Fleming, has been transferred to a black ops site where the modus operandi is torture and death.

Chandler launches a breakneck mission to infiltrate an impossibly secure prison—putting her on a collision course with a squad of violent psychopaths trained to negate her precise skill set. As old enemies reemerge and new ones appear around every corner, Chandler will rely on the help of unexpected allies, including an ex-mob enforcer named Tequila and a firefighter named Lund. But even they may not be enough to stop what lurks within the unlisted military base: A rogue government agency plotting to destabilize the entire nation—and conquer the world.

Time is running out for Chandler, the elite assassin whose mission to rescue her sister from a notorious black ops prison landed her at the top of the nation’s Most Wanted list. Burned by her handlers and forced to work with her mortal enemy in a race to preserve the very government that wants her dead, the living weapon has become a ticking time bomb.

In saving her sister, Chandler unleashed a power-mad American president dead set on controlling the world—no matter how many millions of innocent people he must kill to do it. To stop him, Chandler will go deeper than she’s ever gone before, pushing her body and mind to their absolute limits. All the while she is hunted by the one man who knows her every secret, her every hiding place—and her every weakness. Infiltrating the White House, crashing a bullfight in Mexico City, hijacking a blimp in Toronto...these are just the beginning of the end, as the Codename: Chandler trilogy races towards its stunning conclusion.

Apart from the cliched story, where you find only super-heroes versus complete psychopaths and nothing in between or remotely subtle/intelligent - is there any reason why the narrator feels she has to SHOUT the whole story at you? After a few hours of listening I felt the urge to shout back.
I think I won't make it through the remaining hours... a bit of a waste, really.

Waiting for the next instalment!

Fast paced. Intricate. Entertaining. Would make a series of films to rival those of Jason Bourne.

I have never given 5 stars... until now!

story was great! narration was great! I'm looking for anything written by the authors or read by the narrator. I would read the dictionary if they wrote it or listen to it if narrated by Angela Dawe. Wow! perfect combination...

What disappointed you about Codename: Chandler Trilogy?

This exercise in non-stop mayhem falls into a thriller sub-genre that I think of as "novel-from-video-game." They started out, I think, as novels written by ghost staffs used to novelize shooter video games based on and exploiting Tom Clancy's popularity and name. Now there seems to be an escalating arms race among authors using their own names to create more and more impossibly difficult situations for the increasingly incredible (in the literal, not laudatory sense) ultra-super heroes and in this case heroine. Just an exhausting listen. I've been through all Vince Flynn's Mitch Rapp series and most of Lee Child's Jack Reacher series, so I've been looking for a suitable replacement fix and I got "Flee, Spree, Three" as a $4.95 intro teaser. I'm sorry to say this is a long way from Rapp and Reacher. Fortunately Audible has offered other series intros which are more satisfying, although nothing may ever surpass Rapp and Reacher. If at first you don't succeed ...

This chick, Chandler, was really something. What a killer she was. But worse was those psychos Hammet and Victor.

And can you imagine falling out of a broken window of a 95-floor high building, only to be caught by your rucksack catching on a cable and swinging you toward the scaffold. I would have had a heart attack the minute I fell.

This was on killing book.

Wow! There’s even more killing in this book. And more torturing. That Malcolm was sick and brutal. What he did to Fleming was so horrible. And she gave that sick bastard just what he deserved.

Okay, this is the end of the trilogy and even though Chandler and Fleming and Hammett should have been dead a long time ago they were fantastic heroes. Well, maybe not Hammett so much but she did have some very funny lines BUT she was insane. She’d slept with 160 men AND women and killed 211 people, including children. Once she said the last it was really hard to like her even a little bit.

Overall, my favorite secondary character was McGlade! I laughed so much because of the weirdo. Hammett was funny too but not as funny as McGlade.

The one part I didn’t care for was in the last of the book entitled Three with Chandler and Heath. I mean, they were doing all they could about stopping Ebola from being spread all over Mexico but not so hard that they could stop having sex again and again, or thinking about sex, or talking about sex. I thought that was just stupid. It was a pretty good three part to the series, but it became too sexual. like sex in my romances but not in my assassin storylines.

So, turned out to be lots of sex and the F-bomb was used 85 times.

As to the narration: Angela Dawe was awesome. Different voices for everyone and the men sounding like men.

Amazing Trilogy! Loved them all.

This was such a great trilogy, I enjoyed every one of these stories! I highly recommend this series.

I love all the action, suspense, sticky situations and drama. There was a lot going on all the time, Never a dull moment. I was quite surprised how much I enjoyed these stories.

There is so much great dialogue going on through out. Not just full of filler moments or inner thought nonsense. It was great! If you like bad ass smart women you will like enjoy this series.

The description of the books speaks for itself, So I don't need to put that here, Just know this was fantastic entertainment and a fun amazing listen.

As for the narration, it was hard at first to get used to the narrator but she did grow on me and I am glad for that and it made it even better.

Candy for your ears!

This series gets better as it progresses but you should know up front that you will not get much in the way of character development! I describe this series as pure candy for your ears (I.e. you will forget these books as soon as you turn the last page, nor will you find yourself drawn to any of the characters). It is simply one big car chase. But if you like speed, this book is for you.

Not bad, but unrealistic

the story was completely unbelievable and ridiculous, but it was fun and fast paced. the narrator was annoying though.

A good start to a series

Would you consider the audio edition of Codename: Chandler Trilogy to be better than the print version?

No - I read the first book and then saw the trilogy on Audible.

I read these stories after I read a short story "Fix" which is a tie-in with Repairman Jack. I love RP and have read/listened to all RP stories. Chandler was intriguing and tough. So onto the trilogy. 6 identical sister assassins - premise is unbelievable, but intriguing. On to the real downer in the stories. After a point, I couldn't stand the voice of the reader. I was listening with someone in my car, and he too made an unsolicited comment that her voice was grating. Interesting thing is when she plays other characters, it is less grating but her Chandler voice made me stop listening after the 2nd story and I waited several weeks before finishing the 3rd book.

It's worth a listen. took me a while to get into it then I couldn't help but like it.

Kept me on the edge the whole time!

the story and the plot, we're very easy to read and follow and the narration from the author kept me on the edge of my seat the whole time.

I had to keep listening

An excellent performance of a fun thrill ride.

I'm excited to see what becomes of these characters in future installments.