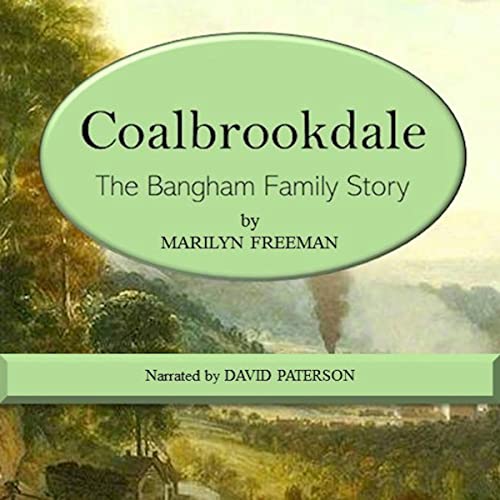 By: Marilyn Freeman
Narrated by: David Paterson
Try for £0.00

Coalbrookdale is a work of fiction based on the life of Joseph Bangham, who lived in the Severn Gorge 300 years ago. He worked for the Coalbrookdale ironworks when Abraham Darby was perfecting the use of coal in the production of iron. These developments facilitated the mass production of iron, and as the technology spread, industry thrived. This was a pivotal moment in the history of the modern world.

This is a story of an ordinary family living at an extraordinary time and in the district known as the "cradle of the Industrial Revolution". Their lives changed fundamentally as the agricultural evolved into the industrial way of life. The audiobook traces the story of the Bangham family as they move from Banghams Wood, where they have been coppicing for decades, across the Gorge to Coalbrookdale and a very different way of life, regulated not by the seasons but by the demands of the furnace. As with any family story, there is joy as well as tragedy.

The many and varied characters interact in ways which sometimes result in unintended consequences, played out against the background of the often brutal 18th century in England, when a child could be transported to America or even hung for poaching a rabbit. As for Joseph, did he realize as he labored at the furnace, he was involved in events that were to change the world? Would those changes be for the better? It seems that even today, the jury is still out, but this audiobook offers a different perspective on the lives of some of the people who were there at the very beginning.

What listeners say about Coalbrookdale