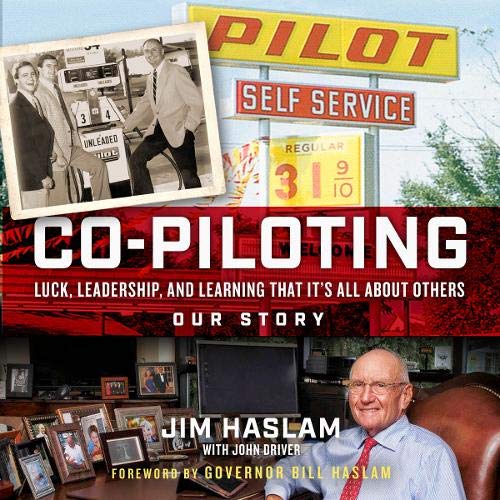 Luck, Leadership, and Learning that It's All About Others: Our Story
By: Jim Haslam, John Driver, Bill Haslam - foreword
Narrated by: Bob Kesling
Length: 7 hrs and 47 mins
Categories: Biographies & Memoirs, Professionals & Academics

This is the remarkable story of one of our nation's luckiest business leaders of the 20th and 21st centuries. Its topics include sports, military history, and, of course, business principles that are sure to entertain and add value to listeners of business books and memoirs.

All proceeds received by Jim Haslam from the sale of this book will benefit nonprofits that support small business, entrepreneurial, and community-based ventures such as the Boys & Girls Club and the United Way - so that like Haslam, others also may be afforded the chance to be fortunate in their own unique endeavors.

Meet James A. Haslam II - "Big Jim" as he is called by friends and family. The details of his life, his family, and Pilot Company comprise a truly remarkable American story that has yet to be widely told, mainly because Haslam has always refused to write about himself. However, after years of less-than-gentle prodding from his loving family and though under duress, he has finally relented and agreed to pen the incredible story of luck and leadership that has taken him all over the world, has enriched lives in countless communities and philanthropic endeavors, and has led to the growth of the beloved company he founded and still serves daily, even into his late 80s.

A graduate of the University of Tennessee, Haslam played on the famous 1951 National Championship football team led by coaching legend and mentor General Robert R. Neyland, whose renowned Game Maxims inspired Haslam's own viewpoints of life and leadership in family, business, and in the art of giving back. From being promoted to company commander in Korea at the age of 23 to starting out at a small oil company with only one gas station, you will follow the unlikely, harrowing, and often hilarious story of luck and leadership that has led Jim Haslam and his family to serve an unbelievable number of industry, community, and philanthropic endeavors affecting countless people in numerous communities, not the least of all Knoxville - and of course, the beloved university Haslam truly believes has afforded him so much opportunity in life. Through great loss and great luck, unforeseen tragedy and unlikely triumph - the story of the Haslams and Pilot Company offers a unique, entertaining, and encouraging perspective to family, faith, and the discovery of what really matters the most in life.

What listeners say about Co-Piloting