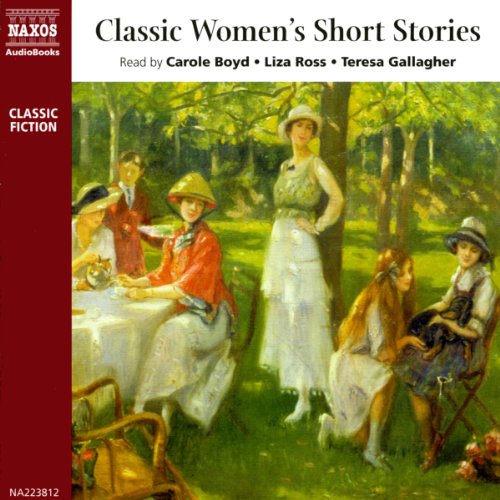 This collection presents two stories of Katherine Mansfield and Kate Chopin and one of Virginia Woolf. The selected stories offer an opportunity to sample the work of three important writers from the twentieth century. Teresa Gallagher, Carole Boyd, and Liza Ross are powerful narrators, who draw out the style of these remarkable women writers. Musical segues between the stories and notes that provide time for each side are helpful although turning to a particular story will take some hunting. This is a nice collection, well narrated.

Five stories from influential women writers of the 19th century and the first decades of the 20th century.

New Zealand-born Katherine Mansfield settled in England where she wrote a series of short stories that are widely recognized as among the finest of the 20th century for their economy, clarity, sensitivity and effect. "The Garden Party" is one of her most famous, while "Daughters of the Late Colonel" shows a wonderful sense of wit.

Kate Chopin, writing in the last years of the 19th century, broke new ground with her daring view of women as individuals with human needs. "Lilacs" and "Ma'ame Pelagie" are sympathetic portraits of women with differing dilemmas.

Woolf's "A Mark on the Wall" shows, in short story form, the turmoil within the stillness which became such a mark of her later novels.

Loved these shorts, brought about the sense of a different time, reflecting women's attitudes about their surroundings which was not as accepted or read. Enjoyed listening to The Mark on the Wall which was beautifully composed to the conclusive realization.