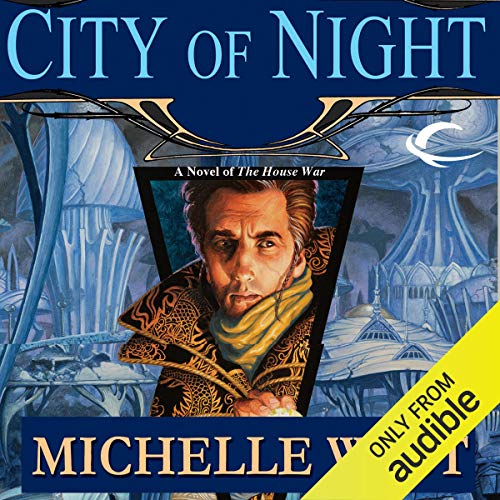 Times are truly desperate within Averalaan's hundred holdings, and Jewel MArkess and her den are finding it hard to survive. Then suddenly their mentor, Rath, orders them to avoid the ancient Undercity beneath Averlaan's streets, cutting them off from their main source of income. Yet Rath himself refuses to heed the warnings of Jewel's seer dreams. Instead, he allies with the mages of the Order of Knowledge in a secret war against demonic foes, knowing he'll be targeted for death - or worse. In a last attempt to protect Jewel and her den, he writes a note of introduction to the head of House Terafin - the sister he's sworn never to contact. For only within the Terafin manse would the den stand a chance of escaping the unnatural forces reaching out to claim them....

Absolutely wonderful series! But be warned:

You'll need to buy the six book Sun Sword series in the middle of the this audible series- which is a pain because you'll need to stop the audible series midway and read Sun Sword, but even with that inconvenience, it's worth it!
Use your credits to buy the 1st 3 books in House War series, then buy the 1st 6 kindle books and read them, by this time you can buy the next 3 books in House War audible series- pick up the hunt brother duo when you can. I know that sounds confusing but if audible had done the entire series ON audible, you wouldn't need to go back and forth between audible and kindle.
This is NOT a criticism of the author or the series (the entire series), but it is a criticism of audible's choice to break up a really well written, compelling series, so that if you don't KNOW there's an entire 6 book series between the first 3 audible books and the last 4- you'll be confused, not knowing where Jewel has been, what the armies were doing in the south and why Jewel wasn't in the Terafin Manse when she was most needed. That annoyed me because I listened to all 6 audibles twice before finding the kindle series that was meant to be part of the series as a whole.
Don't let this deter you though! Listen and read, in order, and you will love these books. Michele West is at her best in this series. Her world building wasn't boring, just the opposite, her 2nd book wasn't tedious as so many 2nd books are and the excitement, tension, climax, and, well things that made me cry are present in ALL the books in the series. The characters are so real I cried when they died! And like Jewel, I'm really not someone that cries easily seems certainly not in public!. I rarely write such long reviews and I don't find those reviews that sound like the publisher's description helpful. I have, after all, read the publisher's description! I DO find reviews that give the reader's opinion of the book, explaining why they did or didn't like the book very helpful- to the point that those kinds of reviews influence my choice of buying or not buying a very big part of my decision. That's what I'm attempting to do here, with the caveat that you NEED the Sun Sword kindle series IN BETWEEN the audible 6 book series.
When books were made of paper, this series would have gone from book 1 to book 12 and possibly book 14 if you include the two hunt brother books (which you should read).
West's magic is solid, the 'demons ' are especially interesting because of how they became what they became, and the 'seer born' was very cool!
I loved the politics. It was fascinating and educational without being tedious and the God-born were an especially unique aspect of society in general, and the twin kings in particular.
All in all this is a must read for fantasy fans! I've listened to so many that I'm running out of audible books in this genre! Migraines make reading painful to impossible, so audible needs to get their stuff together and stop offering books one and two of a three book series, and telling me that book three isn't available on audible. Or doing what they've done with this series. The narrator was very good and thank God they didn't switch narrators in the middle as they've done so many times!
You'll love these books! There is no criticism at all of the books-the story, the author or the narrator. I DO criticize Audible for not making the entire series available on Audible and not even bothering to say 'Hey guys, there is another six books that bisect this series but it's on kindle... just so you know'. Nope. No such warning was issued by Audible although Kindle let's you know that there's an interconnecting series available on Kindle and Audible, but not the other way around.
So! enjoy! this is my third reading of all 14 books and I can't get enough!

Heart breakingly good! I could not put it down. Can't wait to start the 3rd book.

Incredible language that pulls you into the story and brings it to life. The author is a true story teller of old!

A powerful story about choices and facing grief.

This second book focuses on grief, choices, and most of all hope. It tells the story of how Jewel came to leave the holdings. It explains​ what she lost along the way and helps to explain how those loses shaped the woman she will become. Most of all though it explored the different ways we all grieve and how that grief manifests in others. Allowing each character to express their loss without condemning it, but allowing us each to accept it and recognize it for what it is. A powerful example of acceptance and understanding in any world, even one darkened by the shadows of demons walking the street.

I am hooked by this series and find myself looking for the next one. There is a Sun Sword Series which happens between books 4 and 5 and Audible does not carry these. So when you get there you are not missing a book just keep going!

As good as expected!!

I have read all of Michelle Sagara's books and knew she wrote as Michelle West. Tried it and I liked it! Very similar style of writing and while I felt some of the characters familiar, it added to my enjoyment. One of the best things I like about these books are that I can share them with my grandchildren. Good for all ages.