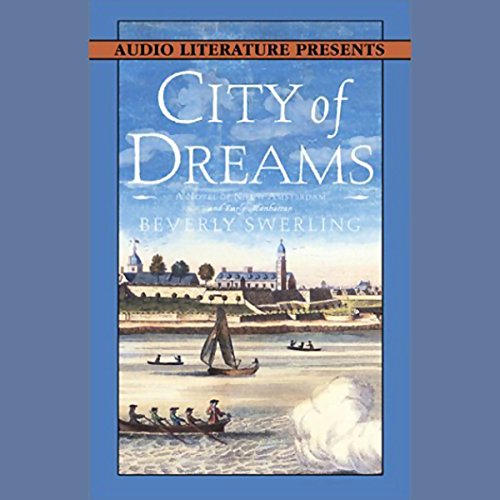 Rich with unforgettable characters and history, intricately plotted and utterly absorbing, City of Dreams is a stirring saga of early Manhattan and the beginnings of medical science told by a master storyteller.

In 1661, Lucas Turner and his sister, Sally, stagger off a small wooden ship after 11 weeks at sea to make a fresh start in the rough and rowdy Dutch settlement of Nieuw Amsterdam. Lucas, a barber surgeon, and Sally, an apothecary, are both gifted healers and bound to each other by blood and necessity. Yet as their new lives unfold, lust, betrayal, and murder will make them deadly enemies.

In their struggle to survive in the New World, both make choices that will burden their descendants, dedicated physicians and surgeons, pirates and whoremasters, with a legacy of secrets and retribution. That heritage sets cousin against cousin, physician against surgeon, and ultimately, patriot against Tory.

I loved the book. However, this abridged version is much too short. The books spans a couple hundred years, and there are dozens of characters. I could follow the story just fine, but I can imagine that someone who did not read the book would come away with his head spinning. It's really a shame, too. Almost all the characters in the book are fleshed out nicely. In this audio book, barely is a character introduced, and he's gone. Hopefully, an unabridged version will be recorded.

More than a City

This story made my trip to New York absolutely vivid. When I took the boat tour on the river one late afternoon, my mind's eye could see the colony, the people and the early Indians. I was truly able to understand how the characters felt when they saw the shore, the small fort, and the natives.
As I walked through NYC, I realized the history of this wonderful city and how meaningful it was.

Too bad it is an abridged version it is a very fascinating story of early america. It would be nice to see more of Beverly Swerling's books in the audio format. and to see City of Dreams redone in the unabdriged version.

This was a real treat. I am a big listener of historical non-fiction. I came to Audible after reading through all the recorded books at my local libraries and was still looking for more. I have often wondered what made a good historical book and I think I have narrowed it down to four aspects:
New and Different - I get something new and different, not a rehash of something I have read before
People and Places - I learn to see and feel the people and places involved.
This book fulfills all four:
Even though I knew much of the history before, after, and around the colony, there was so much that was new and different it felt as if I were listening to a mystery. The people and places were so well described I felt as if I were there at on the shores, in the mountains, on the ships, in the meetings, on the walls of the forts. A real delight. Five stars.

This rendition is missing chapters of the book. It's expensive enough for all of the text to be present in the audio rendition.

Fabulous listen, wish it had been unabridged...

What made the experience of listening to City of Dreams the most enjoyable?

Loved this audiobook, listed to this one after listening to New York:The Novel. Just wish this had been an unabridged version, I'm sure I missed a lot!

What other book might you compare City of Dreams to and why?

I'd compare this to New York:The Novel, however that book was not abridged and was Awesome! This one is an okay listen, think it would have been better unabridged.

I liked this, but didn't love it. The historical pieces cover significant violent parts of our inception from early colonial days to the post-revolutionary NY. The characters, although interesting, seemed incomplete and too many pieces of their stories were left unresolved at the end of each section. When it shifted time periods I felt like it took 20 minutes or so for me to make the connection from one section to the next. I needed to know why some characters disliked relatives and felt unsatisfied in understanding their motivation. It was a nice story, but not great.

Would you listen to City of Dreams again? Why?

No, once was enough, but I enjoyed it.

What was one of the most memorable moments of City of Dreams?

The sweet ignorance of Janet on her wedding night... :)

No, once you established an emotional connection to a character, it skipped firward generation or two in time.

I enjoyed seeing the generations of building New York, I love books that give life to history, but felt some components were left incomplete