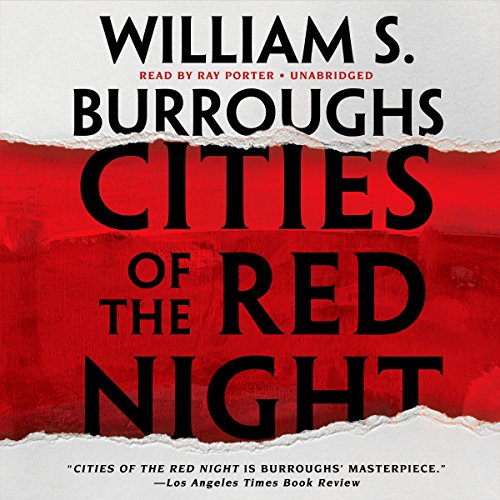 Cities of the Red Night

By: William S. Burroughs
Narrated by: Ray Porter
Try for £0.00

From one of the founders of the beat generation and the 1960s counterculture comes this opening novel of a series available now in audio for the first time. An opium addict is lost in the jungle; young men wage war against an empire of mutants; a handsome young pirate faces his execution; and the world's population is infected with a radioactive epidemic. These stories are woven together in a single tale of mayhem and chaos. In the first novel of the trilogy continued in The Place of Dead Roads and The Western Lands, William Burroughs sharply satirizes modern society in a poetic and shocking story of sex, drugs, disease, and adventure.

What listeners say about Cities of the Red Night

Of course there's no one better to read Burroughs than Burroughs himself. But if you can't get hold of Bill's drawn out reading of his own work then this is certainly the next best thing. Excellently read by Ray Porter, who brings it all to life, and highly recommended by me.
P.s. Though it's book 1 of a trilogy, it does stand up superbly, just by it's self.

Didn’t get into it

I found it to be an unusual and imaginative story, and was read really well. However I found that I didn’t really get into it, so didn’t get a lot from it.

God only knows what this is about

An utter nonsense about sex, cocks, anuses and bodily secretions. Verbal diarrhea. Load of gibberish without conclusion or sense. Only listened through partly because of great narration (completely wasted here) and I was looking for something that will tie this nonsense together. But that didn't happen. Guess this happens in the other two parts of the trilogy. But I will never find out as I will try to stay away from it as far as possible.

A mess of genres with an ugly beauty but unfulfilling

If you like “ejaculate”, “rectal secretions” and “excrement” every other word then this is your book. There is an ugly beauty to parts of this but there is no plot and it has 3 stories running concurrently. A historical, detective noir, sci-fi fantasy, all with unsatisfying climaxes. Ironic, when every character seems to be able to climax at will. It’s a mess, and like most of the Beat authors, outstay it’s welcome. A germ of a good idea that with proper editing and knocking into shape would work but ends up unfulfilling and confusing. Wonderfully narrated by Ray Porter, but overrated

The first third of his magnum opus.

Ray Porter renders the opening of the red night trilogy with precisely the sort of irreverent panache befitting a narration of Burroughs' trademark brand of storytelling. Alongside the masterful evocation of numerous fantastic and absurd characters, it is ridiculous in the most wonderful way.

Burroughs is weird, but I'm sure you knew that

I like the works of Burroughs. I read Naked Lunch in high school and really enjoyed it so I wanted to get into some of his other works. Cities of the Red Night was one of the first ones I found that had an interesting sounding plot and no major hype surrounding it. I can kinda see why it doesn't. The story is great overall and pretty easy to follow for the first 2/3rds of the novel. Then towards the last third it falls apart and becomes a disjointed mess that, while impossible to follow, still provides some entertainment. I would totally recommend this to fans of Burroughs but know that it does fall apart which lead me to not being as into it as I was. Also the performance definitely enhances the experience and makes the novel all the more engaging.

Anarchist gay pirates, time and space travel, reincarnation through various methods, a detective story, a deadly pandemic, custom weaponry, occultism, and more....Cities of the Red Night is my favorite Burroughs book, I think the narrator does an absolutely fantastic job navigating the reader(listener?) through the absolute chaos, doing different accents and voices for the myriad of diverse characters, and setting the tone for each vignette as they are numerous, cutup, and vivid as any Burroughs work.

but that's not saying a ton... dude is one of the flat out funnies effers to ever turn a phrase... but Jesus I do get sick of silver spots behind the eyes and young boys (turned eighteen about six seconds ago... [huge eye roll] or hey in Germany the age of conscent if still fourteen right?...) pitching tents no? I wish... ahh... nevermind ya either love the creepy old pederast or you don't...

burroughs at his best

if you like naked lunch or other of his more popular titles i dont see why you wouldnt love this. narrator was amazing as well

Book 1 As told by the Master

This first volume of the final #Burroughs trilogy, "Red Night" has captured me firmly in its grasp. The weaving of several simultaneous threads which the reader must unravel in "Cities of the Red Night," illustrates and embodies the instructions given by the author on constructing a virus in "Electronic Revolution." I am infected and will complete the cycle through "The Place of Dead Roads" and ending with "The Western Lands." This first volume is full of hallucinatory depictions that snake from the pages as words burn like flames. I have come to value this work as an entertainment in #storytelling and as an #inspiration in my own efforts as a writer. I am pleased to have gotten a signed copy of the third and final book from the author himself upon its release in 1987. That volume is not yet available as an #Audiobook so I will read it on paper after I complete listening to this and the second volume available here.

The narrator, Ray Porter is excellent and has a very convincing manner of shifting voice to embody a variety of characters. He truly comprehends the work and brings the story to life. #tagsgiving #sweepstakes.

Wish there had been some warning. I need to go boil my brain. Blech!

Complete and utter filth. A deplorable tale ostensibly from the mind of a depraved individual. Well narrated despite the content being absolute drivel.

FOR A (SELF-) SELECT(ED) AUDIENCE

Tour de force of one fantastic tableau after another some of the more interesting modes ranging from detective or to underground adventure epics à la Richard Corben. (Would have liked the cutting through jungle section, so we’ll set up to have continued to escalates in this vein but alas not that kind of book or author.)

For readers skewing to the furthest end of the experimental adventurous end of the spectrum. Or others wanting to have minds blown.

This book has it all.

W.S.B. at his peak holy shit. just sit with the story. it'll all make sense in the end.