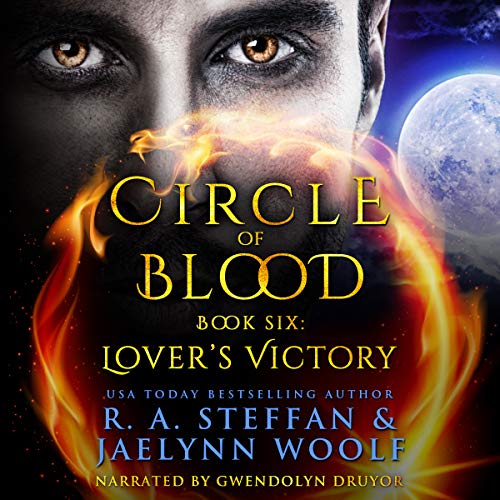 By: Jaelynn Woolf,R. A. Stefan
Narrated by: Gwendolyn Druyor
Try for £0.00

Five thousand years ago, he tried to rule the civilized world. Now, he’s the only one who can save it.

Once upon a time, Menkhef stood up to a powerful pharaoh, and lost. That’s a poor track record for someone acting as the lynchpin in an imminent supernatural war.

Humanity is caught between an absent angel and a vengeful demon. The Council of Thirteen still lacks its final two members, and Menkhef - better known to his friends as Snag - is the only vampire whose mate has not returned. Holed up in an underground tomb complex beneath the oldest pyramid in Egypt, he and his comrades must watch as Bael’s forces gather in preparation for the final battle.

Menkhef only has two secrets left. One will overturn the lives of an unsuspecting American couple. The other will change the entire landscape of the clash for humanity’s future.

In the war between love and hate - death is not the end.

The Circle of Blood series:
In another lifetime, six vampires lost their mates - and their mortality - to an unimaginable evil power. Now, if they can’t reunite with the reincarnated souls of their lost loves soon, it may just mean the end of the world.

The circle is completed in dramatic style

I really enjoyed this series and this book proves to be just as good as the rest, if not better because after five books we finally find out the fate of our favourite vampires. The group had been so much fun getting to know and each story is so interesting that they are all worth a listen to, the way true love can stand the test of time and betrayal. It is sad it has come to an end.
Snag the oldest and most powerful vampire is still to find his soul mate but as the demon Bael's army is amassing out side the Egyptian pyramid time is running out. Snag will have to let go of his final secrets and face the truth about his past. With people flooding the area looking for answers will Snag's soul mate find him in time before time runs out. Six vampires and there soul mates are all that stand in the way of the end of the world as we know it.
Gwendolyn Druyor is one of my favourite narrator's and she never puts in a bad performance, she gives each story her all and it is easy to hear. Each character gets there own distinctive voice but I just love her English voice for Xander.

This entire series is so worth the time. But book 6 we are left with Snag needing to find his soulmate. He is an ancient Egyptian royal and his story is so intriguing. I will not spoil the ending but it is hot!

Gwendolyn Druyor has done an excellent job throughout the entire series.

Worth the credits? Hell, Yes!
I was given this free review copy audiobook at my request and have voluntarily left this review. My review is HONEST.