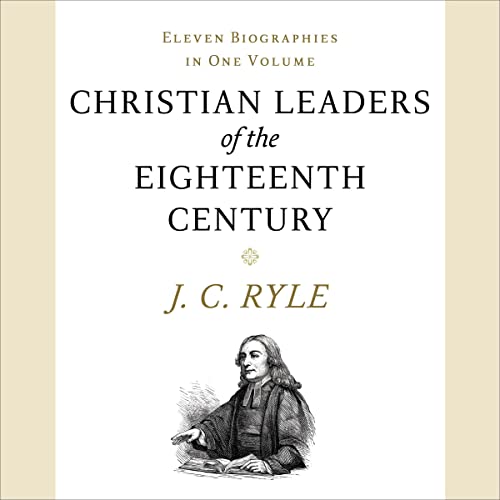 The listener will soon discover that I am an enthusiastic admirer of the men whose lives and ministries I have narrated in this volume. I confess it honestly. I am a thorough admirer of them. I firmly believe that, with the exceptions of Martin Luther and his contemporaries and our own martyred Reformers, the world has not seen any such men since the days of the apostles. I believe there have not been any who have preached as much clear scriptural truth, none who have lived such lives, none who have shown such courage in Christ’s service, none who have suffered as much for the truth, and none who have done as much good. If anyone can name better men, he knows more than I do.

My purpose in compiling these biographies was to present to the public the lives, characters, and work of the leading ministers whom God used to revive Christianity in England in the 18th century. I had long believed that these great men were not sufficiently known, and as a consequence, their value and merit had not been sufficiently recognized. I thought that the church and the world should know something more than they seem to know about such men as Whitefield, Wesley, Romaine, Rowlands, Grimshaw, Berridge, Venn, Toplady, Hervey, Walker, and Fletcher. For 20 years, I waited anxiously for some worthy account of these mighty spiritual heroes. At last I became weary of waiting, and I resolved to take the pen in my own hand and do what I could in the pages of this book.

I now send forth this volume with an earnest prayer that God will pardon all its imperfections, use it for His own glory, and raise up in His church today men like those who are here described. Certainly when we look at the state of the church today, we may well say, “Where is the Lord God of Whitefield and of Rowlands, of Grimshaw and of Venn? O Lord, revive Your work!”

John Charles Ryle (1816-1900) graduated from Eton and Oxford and then pursued a career in politics. However, due to lack of funds, he entered the clergy of the Church of England. He was a contemporary of Spurgeon, Moody, Mueller, and Taylor, and he read the great theologians like Wesley, Bunyan, Knox, Calvin, and Luther. These all influenced Ryle’s understanding and theology. Ryle began his writing career with a tract following the Great Yarmouth suspension-bridge tragedy, where more than a hundred people drowned. He gained a reputation for straightforward preaching and evangelism. He traveled, preached, and wrote more than three hundred pamphlets, tracts, and books, including Expository Thoughts on the Gospels, Principles for Churchmen, and Christian Leaders of the Eighteenth Century. Ryle used the royalties from his writings to pay his father’s debts, but he also felt indebted to his father’s circumstances for changing the direction of his life. He was recommended by Prime Minister Benjamin Disraeli to be Bishop of Liverpool, where he ended his career in 1900.

What listeners say about Christian Leaders of the Eighteenth Century (Updated, Annotated)