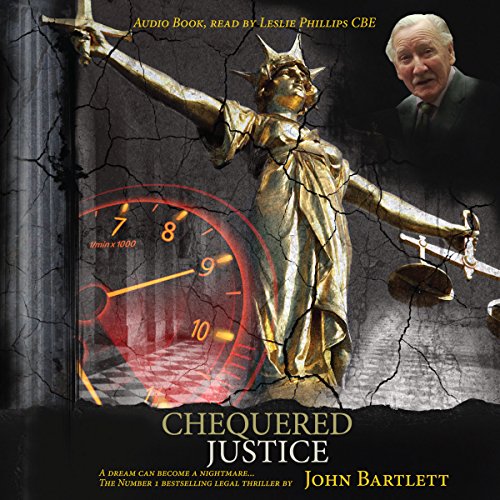 By: John Bartlett
Narrated by: Leslie Phillips CBE
Try for £0.00

Only a handful of individuals ever make it in the world of professional racing. Only a minute few of those who do make it experience the devastating effects of becoming seriously injured, with the inevitable collapse of their life’s dreams. Imagine the trauma and torment of losing it all, only to be accused of having deliberately constructed the event of your downfall...by the Crown!

Will Middleton lives to race. More than just a sport, more than a hobby, it's his first love, his livelihood, and the centre of all his dreams. Thatcher's Britain is in meltdown, yet, despite the deepening recession, Trans-Atlantic, his new racing team, has just pulled off a major coup - sponsors are queuing up, nothing can go wrong now, surely.

The police raid comes out of the blue. Will is questioned under caution. He is charged with fraud and finds himself in a Kafkaesque world where his guilt appears to have been decided in advance. How could a riding accident, an insurance claim, a bounced cheque, and a brief moment of temptation all converge into such a nightmare?

Even as his legal team fights for his acquittal, Will knows in his heart that there is a conspiracy, and the roots of it lie deep in the ancient secret society of the Masons. Trans-Atlantic becomes a distant memory as Will encounters a darker side of life and leaves the glamorous world of motor racing far behind.

What listeners say about Chequered Justice

Where does Chequered Justice rank among all the audiobooks you’ve listened to so far?

This was the first audiobook I have listened to and it was excellent. I had read the book some years ago but had forgotten many of the details, and listening to it brought the whole thing alive in a compelling and refreshing way. Leslie Phillips reads with a fruity, delightful voice which is easy to listen to, and many episodes, especially the motor racing ones, are heightened by professionally produced sound effects which, I think, are unusual among audiobooks but at times made it more like listening to a radio play.

The story itself is based on real events, a personal tragedy in which the main character, Will Middleton, is ensnared in a web of legal tricks by the agents of an unscrupulous insurance company. The details of this, sometimes hard to follow, give a disturbing insight into the way an innocent victim can become trapped in the labyrinth of the British legal system. At the same time the compelling excitement of the world of motor racing is brought to life.

Which character – as performed by Leslie Phillips – was your favourite?

Leslie Phillips reads all the characters well but the voices of the pompous judge and prosecution barrister are particularly delightful.

Made my road trip enjoyable!

Would you consider the audio edition of Chequered Justice to be better than the print version?

Having read the book in print when it came out I still thoroughly enjoyed the audiobook version just as much on a 20 hour road trip over 3 days.

It gave a gripping insight into how the corruption portrayed can happen, and really does happen, within the justice system. It kept my interest by making me want to see how and if the injustices would be put right which is what we are taught to believe and expect.

Leslie Phillips is wonderful to listen to and really brought to life the interest and emotion from the story .

I look forward to more from the author, John Bartlett!

Totally riveting and wonderfully narrated, read by Leslie Phillips (the Sorting Hat from Harry Potter)! It had me laughing one minute and crying the next. Infuriated by the first reviewer; Didn't he realise it MUST be a true story of so called British justice? Google it for the background - I was fascinated but horrified! It was also reviewed by a top British QC, Michael Mansfield, who must surely understand the British legal system? Lastly, I’m not a racing fan but I loved this story about a family. Just so sorry it’s obviously true. Really recommend this!

Not even a brilliant narrator can save this

No one familiar with the law could possibly get over the many legal errors. A trial judge who participated in pre trial hearings, who questions the accused's right to legal aid was bad but when he issues an injunction banning the airing of a TV show without being asked, without notice to the broadcaster I could take no more.

What could John Bartlett have done to make this a more enjoyable book for you?

I trust Mr. Barrett never went on the race track without having his car checked by a mechanic. Why would he write a book about the law without having a lawyer check it for flaws