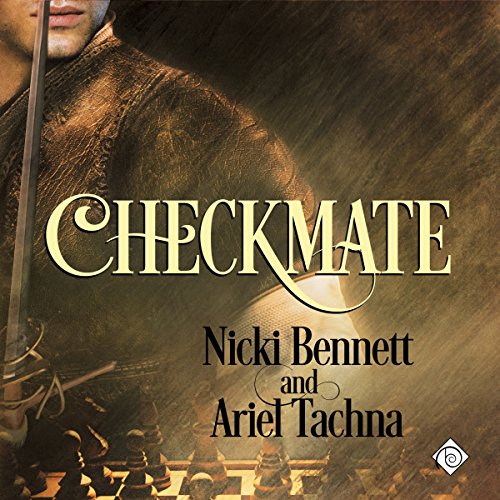 By: Nicki Bennett, Ariel Tachna
Narrated by: Peter B. Brooke

When sword-for-hire Teodoro Ciéza de Vivar accepts a commission to "rescue" Lord Christian Blackwood from unsuitable influences, he has no idea he's landed himself in the middle of a plot to assassinate King Philip IV of Spain and blame the English ambassador for the deed. Nor does he expect the spoiled child he's sent to retrieve to be a handsome, engaging young man.

As Teodoro and Christian face down enemies at every turn, they fall more and more in love, an emotion they can't safely indulge with the threat of the Inquisition looming over them. It will take all their combined guile and influence to outmaneuver the powerful men who would see them separated...or even killed.

What listeners say about Checkmate

Came for the narrator, stayed for the story

I loved, loved this historical romance set in Spain during the Spanish Inquisition. I actually listened to the 2nd book in the series first and was so intrigued with this couple, wanted to listen to their story. This is a very different book than the second. There is much more romance and intrigue than in the 2nd book. Teo is a mercenary who accepts a job to kidnapped what he thinks is a spoiled English Lord. What he finds is a wonderfully grounded young man who is being used as a pawn in the English/Spanish peace negotiation. Set this with the backdrop of Spain during the Spanish Inquisition; not really friendly to gay men during that time, and it made for a wonderful story. Teo is a protector by nature and Christian is forced to become more than his station in light of the danger they both face. The narrator is a favorite and he really does a wonderful job bringing these men to life; complete with Spanish and English accents.

Forbidden love during the Spanish Inquisition

Remind me not to take the Time Machine back to old Spain... Lots of big swords on hot, hunky, swarthy dudes but touching often lead to the lash, the rack and the stake. Ouch....

Christian and Teodoro, Raul and Gerard and Esteban. I can't pick a favorite they were all important to such an exciting story.

Peter B. Brooke did an excellent reading of this book. He read with such passion and all the characters were very distinctive. I don't now how he did it. All that was missing was the clanking of swords and some classical Spanish music!

Would you consider the audio edition of Checkmate to be better than the print version?

I did not know there was a printed edition.

I loved the deep insight into the emotional, and psychological battle the lovers were struggling through and some aspects of their needs in regard to their intimacy

What does Peter B. Brooke bring to the story that you wouldn’t experience if you just read the book?

I never read the book

If you could take any character from Checkmate out to dinner, who would it be and why?

Raul, he was ultimately cool and he knew who he was in life.

I do hope that a sequel is in the works, fantastic story.