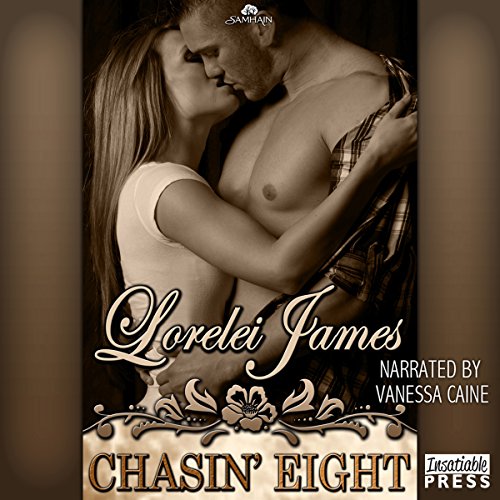 By: Lorelei James
Narrated by: Vanessa Caine
Try for £0.00

Suspended until he gets his act together, bull rider Chase McKay has sworn off women. Forever. Or at least a month. Whichever comes first.

Actress Ava Cooper became a tabloid target when her boyfriend was outed as gay. When she goes into hiding in an abandoned trailer, though, she finds it occupied by the kind of red-blooded cowboy she needs to prove she’s got the goods between the sheets.

The two headstrong stars quickly end up riding a hot and heady rodeo circuit all their own - until the press gets wind. Is it the real deal…or just another publicity stunt?

What listeners say about Chasin' Eight

Would you try another book from Lorelei James and/or Vanessa Caine?

yes,I love Lorelei's books, I love Scarlet as the narrator on the earlier audio books, I just couldn't get in to Vanessa Caine voice.She makes the male voice sound to immature, and I just think a rough rider should sound a little rough.

My fellow reviewers have pretty much said it all about this book - it's passionate, romantic, 2 likeable main characters who are facing similar challenges in their successful careers are accidentally but happily thrown together. Trouble is he's sworn off sex and she's looking for some so can she wait or will he give in.

Not as hot as some of her other books but still an adult only listen and very enjoyable.

Worth a credit? I have found all her books to be very creditworthy but come on Audible we want more L.J. to add to our libraries please.

A SOLID STORY, BUT, WHAT'S UP WITH THE NARRATOR?

Changing narrators 10 books into a series is jarring to say the least. Initially I thought I might skip this one entirely, but, a chapter or two in, LJ's great writing and the hot and heavy romance won out! Chasin' eight was funny and sassy, definitely another winner in the Rough Riders series.

Still waiting for books 1 thru 10

Great book BUT would be even greater if audible would get the rest of the series.

Ever had Audible suggest something for you, where you stop, blink, and wonder if there's a glitch? The computer must have a virus or something? Because that suggestion is *nothing* like what you normally listen to? Well that's what I thought when "Chasin' Eight" came up as something I would like. I mean - cowboys? Bullriders? I like Earls and Dukes and sometimes Demons or Vampires. Not Cowboys.

Ava Cooper is an LA actress whose series has been dropped, who is being stalked by the paparazzi, and who lost her confidence the moment she discovered her boyfriend came out to the world before he did to her.

Chase organises to hide out in his ranching cousin's old trailer to avoid the temptation of sex. Ava escapes to her lawyer friend's cabin hoping she can have a holiday fling with a cowboy, any cowboy, to get some of her mojo back.

It's at that trailer where they meet. In the middle of the night. Naked.

The story goes from strength to strength from there on out. The pair form a tentative friendship, change up their looks and go on the road, hoping to rebuild Chase's bullriding career and Ava's filmmaking eye. On the way there's some serious UST, then lust, then genuine love.

Props to the narrator - I thought she did a terrific job with both Chase and Ava. Some of those steamy scenes in the middle were almost melting my earbuds!

If you haven't met the Rough Riders series yet, then know that Chase is just one among a slew of hunky McKay brothers and cousins, each and every one of them ready to be fallen in love with. Don't let the fact that this is book 8 put you off. This is a self-contained story and a great place to start. It does a great job of introducing you to a Wyoming family filled with plenty more rough and ready characters to capture your heart.

Would you consider the audio edition of Chasin' Eight to be better than the print version?

I love the connection with the family and also the world of rodeo itself. The relationship with the kid is great.

Couldn't wait for this series to come to Audible and boy was it worth it!!! I don't know why she started with only one book and it's from the middle of the series, but after listening who the hell cares!!!!

Fabulous narrator!!! Now where are the others?????

Lorelei James does a great job with this fast paced book. Vanessa Caine does and excellent job as narrator. There were some steamy sex scenes and I found this book kept me wondering what would happen next. Over all a great listen. )

I like that we got to experience life in both Chase and Ava's world -- from the rodeo circuit to the fancy life in New York City. What I liked least was that there was not as much other Mckay story lines as in other books in the series.

Would you be willing to try another book from Lorelei James? Why or why not?

Yes, I have read many Lorelei James books and I am sure I will read more. I have read most of the books in this series multiple times and some of the other series as well.

I think if Chase and Ava's relationship was a little more volatile it would have made for a more exciting read.

If you could sum up Chasin' Eight in three words, what would they be?

What was one of the most memorable moments of Chasin' Eight?

Which character – as performed by Vanessa Caine – was your favorite?

In my opinion this is the perfect listen! The passion between Chase and Ava sizzles. The story is so interesting. I did not stop listening to this one from beginning to end!!! I will be eagerly awaiting the others!