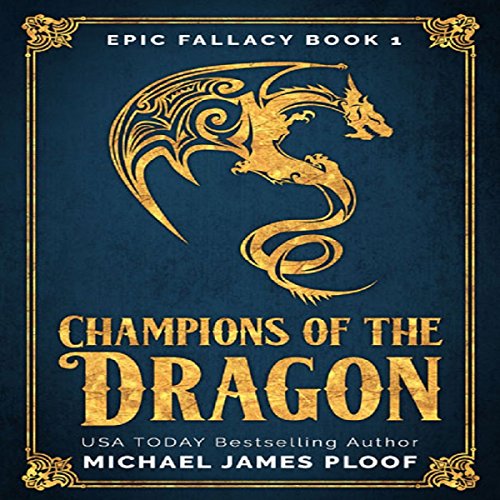 Champions of the Dragon

By: Michael James Ploof
Narrated by: Saethon Williams
Try for £0.00

Murland Kadabra has always dreamed of becoming a great wizard. However, at age 19, the young apprentice has yet to successfully cast a single spell. He has been reduced to grounds keeper of Abra Tower, and has become the laughing stock of the wizarding school. But when the Most High Wizard Kazimir chooses him to be one of the five Champions of the Dragon, Murland's life changes forever.

He soon finds himself traveling through the wilds with four unlikely companions, including an alcoholic knight, a gay elf prince, a dwarf with humanism, and an obese ogre. Prophecy dictates that these champions must march west to the shadowy peak of Bad Mountain, where they are destined to do battle with the dreaded dragon of legend, Drak'Noir.

But what few people know is that the prophecy is not altogether true. For it is not five champions who Kazimir chooses, but five fools. They are not meant to defeat the dragon, but to feed her.

To change their fate, the Champions of the Dragon must not only overcome their enemies, but also themselves.

Champions of the Dragon, book one of Epic Fallacy, is a satirical high-adventure romp through the fantasy genre in the tradition of Terry Pratchett's Discworld series. From USA Today best-selling author Michael James Ploof.

What listeners say about Champions of the Dragon

So, the story seems like it might be ok(series-wise, there is room to improve), but the character development and storyline seem like they where conceived in a drunken or drug induce state of mind. Its an odd mix of intriguing and character stupidity to just push the storyline. However, the narrator made a decision(or someone did) to come up with a bunch of voices for the various characters, its just awful to listen to. The narration when he is not trying to do a voice is good, enjoyable...but the individual characters makes you want to cringe. Why a half-human dwarf sounds like the effeminate elf is really beyond me. There is also a nursery rhyme quality to the presentation that is at odds with the semi-mature nature of the content...anyone for milking a princess.

I think I wouldn't mind reading this story, and give a 3.5-4 star, but combined with the reader and the faults within the story itself, its a solid 2.5-3 star.