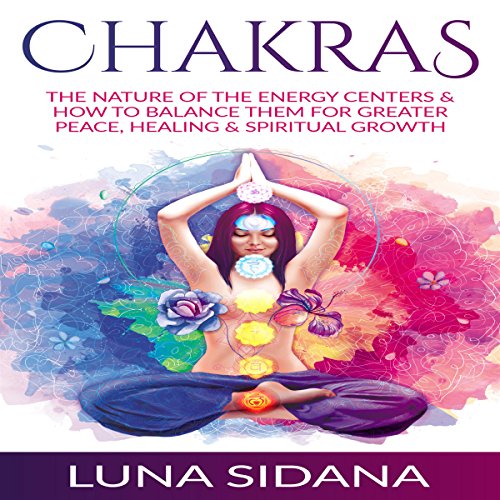 The Nature of the Energy Centers & How to Balance Them for Greater Peace, Healing & Spiritual Growth
By: Luna Sidana
Narrated by: Kristyn Mass
Length: 1 hr and 50 mins
Categories: Religion & Spirituality, Non-fiction

A beginner's guide to the seven energy centers and how to balance them.

The word "chakra" comes from Sanskrit and roughly translates as "wheel". It refers to locations throughout the body at which energy is concentrated into whirling vortices. It is said that, as they spin, they absorb power from their physical environment and transmute it into spiritual substance.

They have also been described as "lotuses" in ancient Indian scriptures, which conveys both their appearance and, because the lotus is such a sacred flower in the east, their value. Though the term for these energy stations comes from India, this is by no means the only culture that has perceived their existence. Indeed, civilizations around the world have both identified and worked with them.

Each center has a unique appearance, specific attributes, and corresponding functions. The sites, according to clairvoyants, are brilliant, ever-rotating vortices made of colored light.

An alternative way of describing a chakra is to see it as a center of awareness. Each one is linked to different developmental stages, beginning with the most basic and ending with complete transformation and awakening. Each stage builds upon the other, and includes physical, psychological, and spiritual components.

During the course of this book we will explore:

Learn about the true nature of your being.

Find the peace and balance you seek.

This was a very interesting and informative book.

This was a very interesting and informative book. Before listening it, I knew very little about Chakras, let alone the benefits from unblocking them. This book has helped me become more centered and relaxed, which used to be next to impossible. I highly recommend giving this book a shot.

For those people who want to know and learn what c

For those people who want to know and learn what chakra meditation is, this is the right book for you. This book explains a lot of information about the benefits of chakras. I really appreciate how the author explained the healing power of this kind of meditation. This is a complete book. You will learn a lot from this book by following the different techniques steps on how to heal and balance yourself. I will recommend this book to my friends and my love ones.

Through this book I have learn how to balance my e

Through this book I have learn how to balance my energy by using Chakras healing. This book also discussed about Meditation, Yoga and Health. Such a great and valuable to listen. I will defiantly recommend this audiobook to all.

This reading material is a great resource to study

This reading material is a great resource to study on how to achieve optimal health and wellness through the unimpeded flow of chakra energy. It guides me well on how to begin clearing the way for energy from these chakras to freely flow, enveloping my body in a shift from general illness to ultimate wellness. It’s supremely exceptional. Wonderful guide for persons who desires to have an optimal physical and psychological well being.

I liked the audiobook. Because of how you can impr

I liked the audiobook. Because of how you can improve your health. I thanked the author.

This audiobook begins with the brief introduction

This audiobook begins with the brief introduction of the 7 main chakras and how energy is constantly radiating from everything in the universe. Reading this book taught me how does a chakra work, the chakra imbalance, and how to heal ourselves. I also learn how to incorporate yoga for chakra balancing which is very applicable to me.

I like this audiobook very much. All 7 Main Chakra

I like this audiobook very much. All 7 Main Chakras is very clearly defined in this book. I love this book. This book changes my life. Thanks for the book!

Excellent book. I like this book. This book totall

Excellent book. I like this book. This book totally great. For this reason, beginning a ritual of daily affirmations with the intention of opening and balancing your chakra system is crucial to the long-term success of your chakra energy health. I highly recommended this book. Finally helpful this book.

I am very pleased with my purchase.

I am very pleased with my purchase. I am learning so much from the 7chakraa, essential oils, Crystals and stones....exercises to help with balance and alignment and so much more!!! This book is a great book for anyone who is new to Chakra Healing or just curious as to the meaning of connecting with the universe.

I have already learned so much from this book in just a few days that I have listened to it. I found this audio book well-explained indeed!