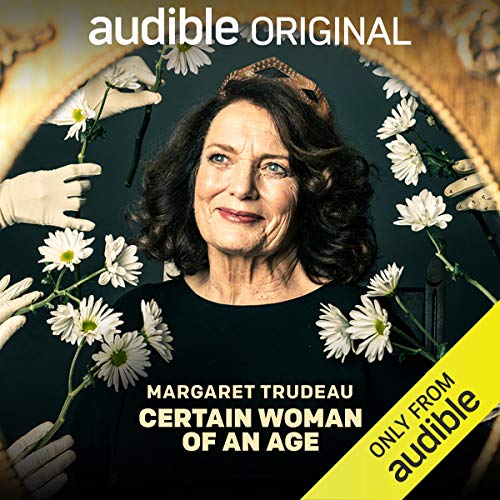 Certain Woman of an Age

Margaret Trudeau, former wife of Pierre Trudeau, 15th Prime Minister of Canada, mother of Justin Trudeau, Canada's current Prime Minister, and international mental health advocate, brought her intimate staged performance, Certain Woman of an Age, to the Minetta Lane Theatre, where it was recorded live for Audible Theater. In this "fearless and vulnerable" (Chicago Tribune) one-woman show, Trudeau opens up - with refreshing candor - about her extraordinary life and her encounters with some of the most important icons of our time. It's a gripping portrait of motherhood, marriage, life-altering tragedy, and personal triumph. Co-written with Alix Sobler and directed by Kimberly Senior, Certain Woman of an Age is a funny, honest examination of one of the world’s most fascinating figures.

What listeners say about Certain Woman of an Age

My dad was bi-polar, it was hell, so much of her story is familiar. Her def of clinical depression hit home, it is spot on. Like she said there is still such a stigma today on mental illness, forty yrs ago it was brutal. I enjoyed her telling her own story in her own voice,who else can have the passion or feeling to tell it. It’s sad to see negative reviews condemning the way she spoke,how shallow. She got into some very dark parts of her life, it takes character and courage to say,”yes,I was taken to the hospital by the police and strapped to a gurney”. Nothing about her story portrays a selfish, indulgent person. I would not have the arrogance to criticize any part of her story, having NOT been the one that lived it.

I got three quarters through this and couldn’t hear anymore. In honor of all my female friends that have suffered with mental disorders who bravely walked their oft times heart-wrenching paths, this woman made me shake my head. Spoiled, indulged, and thankless. Little do you hear of the heart ache she caused. It’s all about her and using her mental problems as an excuse for acts of immaturity and indulgence.

A story of resilience!

A short amazing book about ones life, struggles and triumphs. Love that Margaret herself told her own story. A delight. You’ll feel happier after hearing how resilient she is.

A poignant story of mental illness

Madam Trudeau offers a candid story of her personal experience with bi-polar disease. She delivers a heartwarming tale of her life and diagnosis. As the former first lady of Canada, this story deserves to be heard. Bless her for her openness.

I found this interesting and an easy quick listen but I wish that it was someone else speaking.

Does it ever work well when the writer is the narrator?

Also found this interesting because she is the mother of a very powerful politician.

In explaining Bi-polar, like I’ve never heard before, I’m beginning to understand myself just a little. Your bravery has given me a tincture of confidence, to look at it.

Just WOW! Thank you MargaretTrudeau! YOU are a GREAT blessing. THANK YOU for sharing your life with such amazing honesty, humor, wisdom and strength.

I felt her heart shining through from beginning to end. She did not hold back. So real, so moving. I want to thank her for sharing her courage. I will share with others.

This was a very good, entertaining, and enjoyable time. It's nice to hear about someone's adventures.

While I like Trudeau's openness about life and mental illness, this all felt a bit thin. A decent yarn. I wish she had gone deeper.

Trudeau is a bit breathy with her talking.