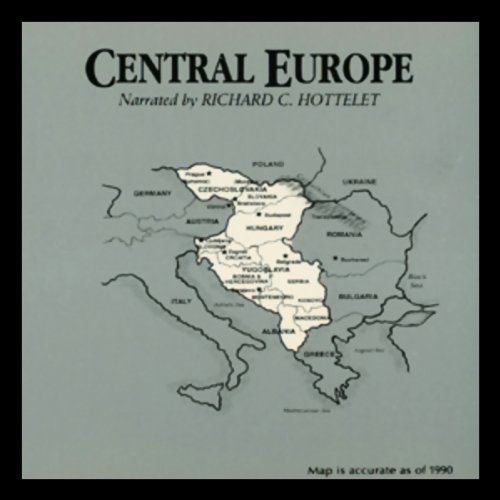 By: Ralph Racio
Narrated by: Richard C. Hottelet
Try for £0.00

Central Europe's ancient civilizations have long been dominated by empires: The Roman Empire; the Habsburg Empire, based in Austria; and more recently, the Soviet Communists. But the decline of communism in the late 20th century has unleashed old resentments, rivalries, and ambitions that have caused yet more war in this troubled region.

The World's Political Hot Spots series explains the basis of conflicts in some of the world's most politically sensitive areas. Many of these regions are in today's headlines, and tensions recently have become violent in virtually all of them. Each presentation covers up to 10 centuries of background, revealing how and why today's problems occur.

What listeners say about Central Europe

very informative and well narrated, the tone, the voices are great, never made me bored or feeling sleepy, I loved the imitation of the native accents throughout the audio book, this book means a lot to me as part of my family are scattered on that region, I recommend this book if you want to learn about the region and its people, and if you want to learn from history for the future as history repeating itself. Thump up for everybody who worked on this audio book.

Superficial often incorrect history written like a version out of the US State Department of the 1970s. Ignores what was going on around the world. The voicing of different characters is awful as is the pronunciation. I was surprised at how bad this was. Read Year Zero, A history of 1945 by Ian Baruma to recover from this book

Use all different voices citing original sources to form a narrative of the region’s history, not boring

If you’re looking for a lightning guide to the history of Central Europe, this is a great book for you. It starts back in the days of Rome and goes through the fall of the Iron Curtain and while there is very little dwelling upon any single period, it will help you see the overall story of several peoples holding on to their identity while various outside powers occupy their lands. The narration is punctuated with many quotes from original sources that contribute well to the overall account. This book makes for a very quick but informative read.

a quick and important part of human history

thank you audible for making it free. it at once refreshed some memory, edited and updated some more.
any responsible person will have second thought about war and communism.

Over half 20th century

Although this book starts in the middle ages, over half the book is about the 20th century. The book was written in 1992, so no event after appear in the book.

This is the worst thing I have ever heard from Audible. I don't know if the whole series is this poor as this is my first one. I certainly hope not.

This series has been very useful to give a basic overview and history of a region.
I like format and am grateful as they supply a good synopsis of whatever country/region that they cover. I only wish that they were longer and more detailed.