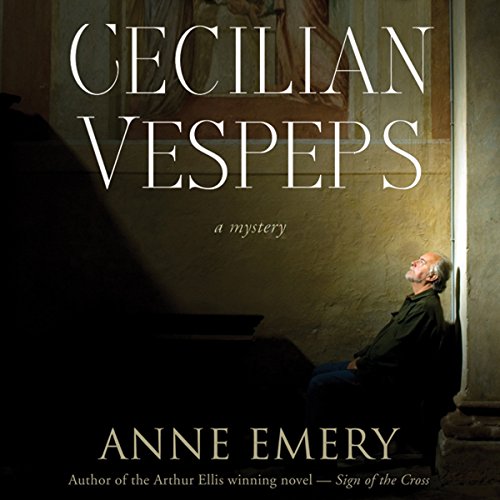 By: Anne Emery
Narrated by: Christian Rummel
Try for £0.00

Lawyer and bluesman Monty Collins is used to defending murderers - and occasionally investigating murders himself - but he's never come up against anything like the case of Reinhold Schellenberg, a world-renowned German theologian who has been found dead on the altar of an old church in Halifax, Nova Scotia, on Saint Cecilia's Day. The controversial priest, once a top insider in the Vatican, was known to provoke strong feelings in Catholics of all ideological stripes, and now those feelings have overflowed with horrifying results.

At least Monty knows where to look for clues: his friend Father Brennan Burke has just opened a choir school at the church, and the students provide an international cast of suspects - including a flamboyant Sicilian priest, an eccentric English monk, a disgruntled American, a Vatican enforcer, a church lady with a history of violence, and most perplexing of all, a police officer from the former East Berlin.

"The large pool of suspects from around the globe ensure a challenging whodunit. Readers interested in the history and impact of the Vatican II reforms will be especially rewarded." (Publishers Weekly)
"Emery continues to imbue her stories with a strong sense of place, using real Halifax street names and plenty of affectionate descriptions of the weather and countryside. Series readers will be pleased with the new story and character developments, as will those looking for a fresh setting." (Booklist)
"A sparkling novel . . . Emery has continued her winning ways." (Waterloo Region Record)

What listeners say about Cecilian Vespers: A Collins-Burke Mystery, Book 4

I basically do enjoy this series, but with each book The priest, Burke, becomes less priestly - I quite like his irascible ways, but the amount of drink that he and Montague imbibe is just plain daft, and some of their other activities are a bit beyond belief too.
I also find that the over the top obsession with his church music is reaching the heights where I am wondering - 'Is Anne Emery trying to impress us with her knowledge?' It detracts rather than adds to the story.

Another excellent helping of Collins and Burke!

Monty and Brennan have their hands full in this one. Brennan sees the dream of his life, his music school, at risk from a gruesome murder and Monty has to struggle against a pile of clues that make (at least at first) no sense. It seems everyone has a secret and something to hide, but no-one seems to have motive enough to kill an old priest. That is until Monty starts digging! The trail of clues takes Monty and Brennan to Italy where Monty gets to see a whole different side to his closest friend. All of the Collins-Burke mysteries centre around a Catholic community, but this one is steeped in it. Now I thoroughly enjoyed that, but those who might not, need to be aware that it is the raison d'être of the plot and it is on every page. But having said that, what a plot it is. This book and Murder at Christie Burke's are the two best Collins-Burke mysteries, more detailed and more meat in the plot. Monty and Brennan are at their best and the seemingly senseless crime has a really sharp ending.The icing on the cake for all these books is the narration by Christian Rummel. He does a superb job. It's no wonder there are literally dozens of books out there narrated by him, he is awesome.

Although this is an intriguing mystery/legal thriller, it draws very heavily on arcane details of Catholicism, music, philosophy and politics. This can either excite or turn off the listener. Narrator did well except in his portrayal of female characters (both children and adults) which was irritating.

What could Anne Emery have done to make this a more enjoyable book for you?

make "Normi" less irritating and annoying and generally have a smaller role in this story. She is supposed to be 8 years old but her behaviour is much younger than that and I don't understand why she features so heavily in this supposedly murder mystery book. It isn't like she develops in any notable way...

what's not to like? he is a hugely talented 'voice actor' making all the characters come alive, even to the point of being annoying! (see above comment!!)

What character would you cut from Cecilian Vespers: A Collins-Burke Mystery, Book 4?

too much additional stuff about Catholicism and even music - and even the private life of Collins all of which is to plump out what is in the end, a very thin storyline. I liked one and two in the series, wasn't so sure with the third and now with the fourth may go no further with Burke and Collins. The characters don't really develop, they keep making the same mistakes and I find that I don't really care what happens to Collins and his 'family' as he seems incapable of learning from his mistakes.

I am disappointed and sorry to agree with other reviews -- the first book was full of spark, personality and plot. -- this one is simply DOA. And there's nothing wrong with bringing some details of a particular religion into a story -- Faye Kellerman and others do it and I find it interesting -- but here it's like Emery is using liturgical detail to fill the spaces she can't otherwise fill. The quirky personality that gave the first book humor and a touch of crazy-wisdom came across in this one as self-indulgent and mean. I didn't finish it. I hope Emery gets back in touch with spark and humor of the first book.

Very good, loved the Italian parts. Wished I could hear the music! Sad ending, on many levels.

Very good to listen to. Good squats and turns in the plot. Have enjoyed other reads of Anne's. Am not long on words.

I *LOVE* the Collins-Burke Series!! I can't buy the next one right away due to the budget - and I think I am having withdrawals!! That said, this was not my favorite... while I like the story/plot, there were so many characters - I found it hard to keep up with all of them. I think if I had been READING instead of LISTENING, maybe it would not have seemed so overwhelming? Not sure! Still love the characters and the series! The narrator is remarkable! This makes me want to learn more about the Catholic faith!

What was most disappointing about Anne Emery’s story?

So disappointed to see interesting characters end up in a plot involving Nazis, stolen necklaces, etc. The charm of Book 1 of the series was lost here.