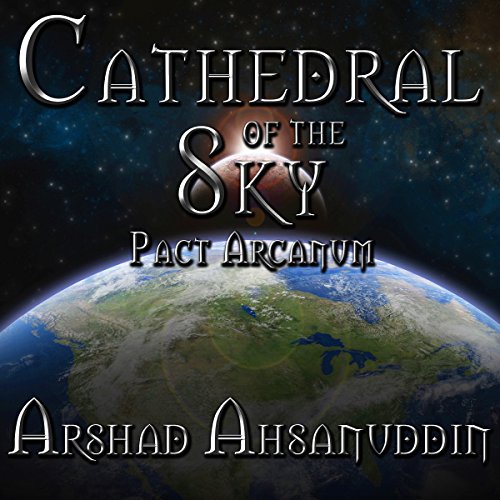 Cathedral of the Sky (Pact Arcanum)

Cathedral of the Sky (Pact Arcanum)

This book is concurrent with Sunset (Pact Arcanum: Book 1) in story continuity.

Venice, Italy, 2039. When Michael Danvers witnesses a vampire attack, his latent ability to shapeshift awakens. Revealed as a Sentinel, the natural enemy of Nightwalkers, 13-year-old Michael must turn his back on his family and his safe, predictable life. But a supernatural battlefield is no place for a child, not even a genius like Michael. Betrayed by his own kind, he leaves Earth behind, hoping to find a new path with the Spacer Guild – and the stars.

Relocating to the Citadel, Michael quickly makes a name for himself at the Spacer Guild Academy. But each advancement means less to him than the friendships he acquires, of fellow cadets William and Ariel, even as Michael is promoted above them.

Everyone had plans for Michael’s future: his parents, the Sentinels, the Guild—even his best friend, Will. But Michael takes control of his destiny, and when called upon to make a fateful decision with countless lives hanging in the balance, the only sense of honor that matters is his own.

What a fun step into Michaels life, short as it was. Thank you for weaving more delight and tears into my eyes.

Oh this one made me so sad!!! From poor Michael not getting to do what he wanted to in person, but was done in the end. To the epilogue. I'm so glad that in the end we see Michael & Will together & Will finally telling Michael how he felt. Even though we see Michael from 13-15 yrs of age, he was pretty mature, though there were a couple of times that he did act his age.

Wow. This one surprised me. It made me smile and it made me cry. I will remember this in my heart as I ready myself for the 'rest' of the stories in the books to come. Greg did a good job, but the story itself was so much more than I expected, short as it was. His quality narration of sci-fi, and obvious love for the genre helped add to it, and even though I own the previous narrations, I want to wait, and savor the rest of the series he will do for the author, as I will always hear his voice for Will and Michael, and Ariel...

So good, so sad

I didnt expect them to make this novel into an audiobook, but after my disapointment of it not being the second book in the series made, I got pleasantly suprised by how good this one was. We only got a couple of glimses of Michael in the first book Sunset and no matter how noble his sacrefice was at the end, you just didnt know him enough to be truely sad about it. But as I listened to this I got a good look at this amazing young mans story and cried rivers at the end. Wish Arshad had put more of this into the first book insted of something you have to read up on, would have made it much better. Still think people should listen to Sunset first thou as this would spoil to much of the ending.
Hope Greg and Arshad hurry up with getting the rest of the series made into audio, Greg truely give this world life!