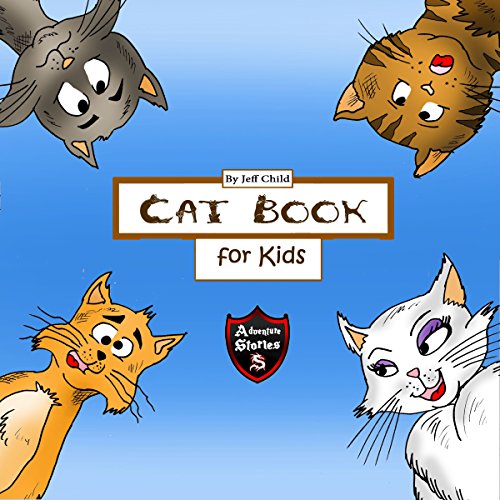 Cat Book for Kids: Diary of a Wimpy Cat (Adventure Stories for Kids)

By: Jeff Child
Narrated by: John H Fehskens
Try for £0.00

Casper and Izabelle are two cats, but their relationship is about to fail.

When Casper finds out that his cat girlfriend becomes a little more demanding than she was at first, he starts having doubts, but when she sends him on a dangerous mission, he really doesn't know anymore. This story involves explosive monsters and strange objects, and a bunch of cats trying to argue over what's best to do. The alleycats in this story are friends, but one of them is constantly lying. Find out who and listen to more!

What listeners say about Cat Book for Kids: Diary of a Wimpy Cat (Adventure Stories for Kids)

My son told me about this. He said it was so fun to hear!!! The story is very good!!!

My children always want to hear this.

This audible was recommended by my sister. She told me that this is good for my kids. Worth it.

The story was all about relationship. I found it very interesting. The ending was fun.

I have bought this for my one and only son.

He liked this even he doesn't like cats. The story is unique and well detailed.

My children liked this one.

They always kept playing this audible. They really liked this one because they like cats and the story is great too. Highly recommended!

The story is good.

Good story. The author and the narrator did a great job. I liked it.

This book is so good. It helps the kids to explore

This book is so good. It helps the kids to explore more because the characters in the story was very adventurous. I encourage other kids to listen to this story. The narration is very good and it is so lively.

Very refreshing to mind! This is so good to liste

Very refreshing to mind! This is so good to listen to I was able to download this audible book because of my younger brother who loves this kind of book. I tried to listen after I purchased this for him and I liked the story of Casper and his Cat Girlfriend and their cute love story. Very well-narrated. Kudos to the Author.

I was in the office when I purchased this

I was in the office when I purchased this audio book for my kids and out of boredom I was tempted to try this and I found it so fun to listen that is why my kids really really like to play such book. Also the story is good for kids.

I got bored at my class on time and try to search some things to make my self avoid from boredom and I found this audible book and tried to play it and I was so amazed that there is such book like this that can take boredom out. I found this perfect past time.

My car was in the shop. My dad drove me to

My car was in the shop. My dad drove me to and from work for several days. Picking an audio book to listen to with my dad is tricky. I decided to listen to this book. I'd already purchased this book for my nephew. It looked great, so I bought the audio book for myself.

The story is intended to be

The story is intended to be nice and it is made intelligently and the author, wisely,. The narrator is excellent and a joy to listen to. This is a great book for kids and adults alike. Well worth the credit.

initially bought this book with low expectations. I enjoyed the narrator on the sample but otherwise I expected the book to so-so. I was surprised to find that the book is fun, imaginative.

I really liked this audio book. It's perfect to

I really liked this audio book. It's perfect to listen to in the car with kids- or just by yourself! (Like I did!) It's probably one of the best 'kid friendly' books I've listened to in quite awhile. While I liked Casper, I loved Izabelle She was such a great,

The best audio book I have ever had so far because

The best audio book I have ever had so far because I got some book like this before but the story was not good and not fit for kids. But this audible book and its story is really fun and amazing that is why I found it nice and well.

My son has poor eyesight because he really loves

My son has poor eyesight because he really loves reading books and as a mom I don't want his health to be at risk so I have searched the solution and I found this audible book which means to listen and I was so glad that there would be great solution to my problem and when I gave it to him he did like it and i am sure that his eye health would be safe. Thanks to this audio book!