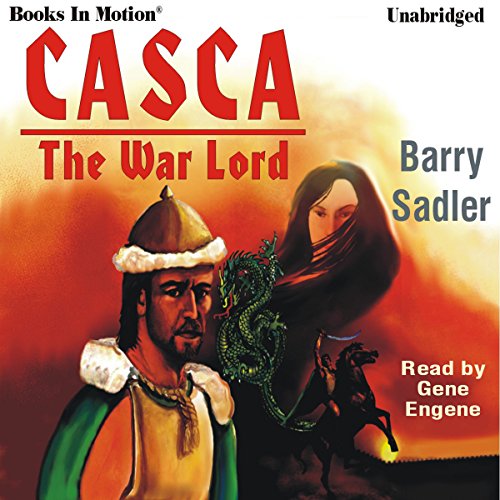 This is audiobook #3 in the Casca Series.

Casca awoke from a drugged sleep and saw his spear thrust into the side of the man on the cross. His spear...lost when he was sent from Judea! It wasn't a vision - it was the beginning of a threat which would follow Casca through eternity, and cost him the use of his hand.

As Doctor Goldman is soon to learn, it is just the beginning of an adventure which would take Casca behind the Great Wall of the Hidden Empire, China. He would rise to the position of War Lord, and heir to the throne, only to be buried alive at the whim of a frustrated royal concubine.

What listeners say about Casca the Warlord: Casca Series #3

I read several of these books when they came out, decades ago. This was one I missed. I really enjoyed this one; it has what all this series does. They're all more than just based on an immortal character: the historical aspect is spot on. Having history as a minor in college, this just spoke to me when I rediscovered them. Sadler puts heart & soul into these books, making the ride fun & thought provoking. Now into the next installment!

Narrator is the best

Gene engene is simply awesome. He really makes the stories come to life and his voice is pleasant and varied.

OK but one of the weaker books in the series.

could easily be skipped in favor of better books in the series. it's short but not all that interesting in my opinion.

Awesome listen, great series!! Must buy or listen to audio.. On to the next book!

I am relatively new to the Casca series. This is the third Casca book I've read. Barry Sadler spins a good yarn.

In this submission, Casca travels across Asia to honor the recommendations of an old friend.