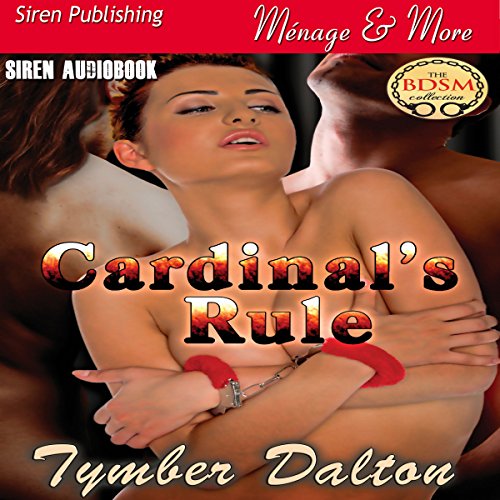 Tilly Cardinal's world imploded when her master, Cris, disappeared with no explanation other than a short, cryptic note releasing her as his slave. Five years later, she's Mistress Cardinal, a vicious, successful pro domme charging big bucks to dish out whatever abuse men will pay to take. Materially, she wants for nothing. Privately, she's never felt more alone.

In walks Landry LaCroux, a handsome, rich man with a proposition - he wants Tilly to train his slave. Landry holds the key to Tilly's past, and her future. She's shocked to discover Landry's slave is her former master, Cris. Landry has a secret - he has cancer and wants to make Tilly a deal. Marry him and help him through his recovery, and he'll pay her handsomely for it.

Love wasn't supposed to be part of the bargain, but can the three of them find healing and a lasting happiness under Cardinal's Rule?

What listeners say about Cardinal's Rule

I've read some books in this series before but now that I have some of them on Audio I'm going to listened to all the ones that are out even if I read them before. I have read this series completely out of order and honesty it hasn't made a bit of difference to me. This was another GREAT story by Tymber Dalton! She is a Favorite of mine! This book was Hot, Sweet, a little vindictive and had a great ending! I really enjoyed Tillie, Landry and Cris's story. I love that this is a BDSM love story! Most books in the genre are more sex than story but Tymber is perfect and giving us the right amount of each. I only wish Siren Publishing would get a new cover artist because if someone hadn't recommended these books to me years ago, honestly I probably would have never even considered it. These covers do such an injustice to these emotional stories! The Narration in this audiobook was great too!!! Can't wait for the next one!

A simple story made way too complicated

First of all, you will need to get over the narrator. She is simply reading the book. Her voice doesn't change. So, at times, I have to concentrate on who is really speaking. Him or Her? Can't tell. Rewind. uuuhhhhh!! With the right narrator, this story could have been over the top and sizzling!

The story is simple but made complicated. About a girl who hasn't been with a guy for 5 years and then marries one after a couple of days. WTF??? Oh yeah, for the money. Is it? But he has a lover. Her Ex. Whatever... made complicated.

I love Cris' character... who is not the main character... but should have been. I wish he had balls!! I don't agree with the way the main characters are portrayed... a bit too selfish for my liking. Didn't care for the way they handled situations and heartaches. However, it's just a story. Yes a HEA which implies everyone is happy at the end. EXCEPT ME!!! ;) I would have preferred that Cris runs off with ME and leave the rest behind. :P

Yes, its a good story. Is it a keeper? Not for me! Some good scenes but some were... "what the hell" moments.

I haven't even finished the audio book. I've read this book several time, but sometimes I like to have audio too. If I had heard this lady's voice first I would have hated this book. This lady does not do Tilly's character justice. She is such a huge part of this series and so vibrant. The narrator is just dull and doesn't do this book justice.

Loved the book--Audio is awful

Her voice just irritated me--I won't buy anything she narrates in the future--even if I love the author's work.

I read the Kindle version of this book and love it. However, the narrator ruined my perception of Tilly, and I had to re-read the book to get her true essence back in my mind. She is a pivotal character in this series; therefore, I needed to find the real Tilly again before I could continue to enjoy the series.

I have all of Tymber’s work on audio, I didn't put two and two together that this was Tilly’s story because well I thought of Tilly’s Rule not Cardinal.. So I was looking thought my Audible and reading blurb something I hardly do and say Tilly so I had to listen ASAP.

I think I loved it even more in Audio! The narration I really enjoyed she did a great job in my opinion.

Chris was Tilly’s Dom… but Landry is Chris’s Dom.. Yeah this are about to get shaky.
It’s a great story of living through hard times and turning yourself around. Coming out stronger then when you started in so many ways.
I can’t say I am a huge Chris fan but I get why he did what he did (a little bit). I don’t like it and I still want Lan to, (be all I will hold him for you haha.. )

I had a feeling Landry had something up his sleeve the whole time even if he said he didn't. I think though I was mostly surprised at Landry and his feeling for Tilly. There connection kind of blew me away at how strong it got.

Then you have Tilly and here feelings or hard feelings I should say toward Chris, not that he didn't deserve it because he totally did. But that relationship was kind of interested to watch.

Over all I enjoyed this book whether it’s with my eyes or my ears. I hope others check it out because it was pretty awesome.

in this book, all the voices are read in the same voice, so that you can barely tell who is speaking, or whether it's the narration or a character speaking. the story is good, although there could have been more MMF scenes, and they could have described the domme scenes in more detail.

This story has a very emotional pull. Tilly has lost everything that had meaning is able to pull from an inter strength and has reinvented herself. And just when she's ready to move forward in a new way wham she's broadsided but her past. But her past isn't what she thought either and now there is another who needs her in a completely different way. I love how the rough, emotional drama was not just glossed over or rushed. You could feel the real pain and the struggle to come to terms with everything.

Updated review - 6/10/2017 - Audible version
It had been a while since I've read this book from the beginning of the Suncoast Society but it was a lot of fun to have the chance to reconnect and refresh my memory of this special Triad's story since they have been such an integral part of the Suncoast family. The narration of this version makes it easy to follow along between characters. This story looses none of its impact on a second go around.