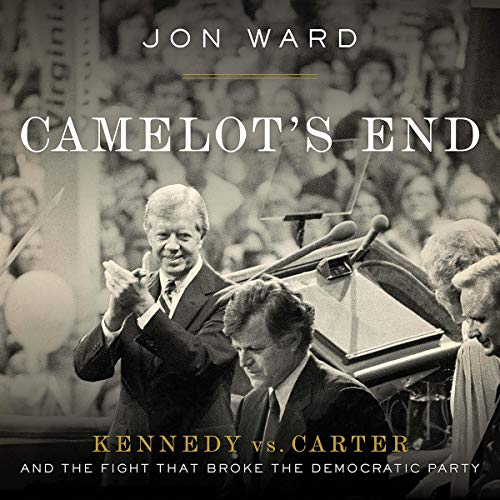 From a strange, dark chapter in American political history comes the captivating story of Ted Kennedy's 1980 campaign for president against the incumbent Jimmy Carter, told in full for the first time.

The Carter presidency was on life support. The Democrats, desperate to keep power and yearning to resurrect former glory, turned to Kennedy. And so, 1980 became a civil war. It was the last time an American president received a serious reelection challenge from inside his own party, the last contested convention, and the last all-out floor fight, where political combatants fought in real time to decide who would be the nominee. It was the last gasp of an outdated system, an insider's game that old Kennedy hands thought they had mastered, and the year that marked the unraveling of the Democratic Party as America had known it.

Camelot's End details the incredible drama of Kennedy's challenge - what led to it, how it unfolded, and its lasting effects - with cinematic sweep. It is a story about what happened to the Democratic Party when the country's long string of successes, luck, and global dominance following World War II ran its course, and how, on a quest to recapture the magic of JFK, Democrats plunged themselves into an intra-party civil war.

And, at its heart, Camelot's End is the tale of two extraordinary and deeply flawed men: Teddy Kennedy, one of the nation's greatest lawmakers, a man of flaws, and of great character; and Jimmy Carter, a politically tenacious but frequently underestimated trailblazer. Comprehensive and nuanced, featuring new interviews with major party leaders and behind-the-scenes revelations from the time, Camelot's End presents both Kennedy and Carter in a new light and takes listeners deep inside a dark chapter in American political history.

"Well written, well reported, and compelling, Jon Ward's Camelot's End paints a picture of two flawed and ambitious politicians and destiny's collision course for them. Beyond the political stakes seen by the Kennedy and Carter camps, Ward manages to draw out the drama of the philosophical choices the two represented, and the character of the Democratic Party and indeed the nation. It's a sheer joy to read."(Jake Tapper, CNN Anchor and Chief Washington Correspondent)

"Captivating...[Camelot's End] moves at a steady clip, but not by sacrificing scholarship - Ward draws on journalism of the day, previous biographies, histories, memoirs, and new interviews with some of the players. He engages fully with the complexities of both men...enthralling reading." (Publishers Weekly, starred review)

"A well-researched and valuable look back at a period of intense political turmoil that helped shape our current environment." (Booklist)

What listeners say about Camelot's End

So many interesting details

I lived through this era and so I remember the major stories. But this book reminded me of many details I'd forgotten and supplied so much inside info that completed the story for me. I really enjoyed this book and the reader's terrific presentation of it. Highly recommended!

I am a difficult person to keep focused so I can start a book and stop listening if it slows down. Jon Ward’s book brought Carter and Kennedy so much alive I was sad when it finished. I hope Jon keeps writing.

This is an insightful and unbiased look into both Kennedy and Carter as men and historical figures.

Very good book about two flawed yet hard working men. Would recommend to anyone interested in history or American politics.

Does character count in political office?

Covering what is now a historical period, which encompassed the presidential nomination contest between Jimmy Carter and Ted Kennedy, this book eerily mirrors today's Democratic party with its familiar establishment versus progressive tensions. Jon Ward provides an interwoven exposé of two very different persons, from their family backgrounds to their approach to governing. Each learned to survive in the political world he grew up in. Both were ambitious, and each pursued his advancement in different ways as fit his own personality.

The procedural changes in the early 1970s, that allowed George McGovern to secure the Democratic nomination in 1972 and Jimmy Carter to do the same in 1976, played a role in the relationship between Carter and Kennedy in 1980 when Carter was the incumbent president. Comparing those events with an earlier period in which party bosses negotiated in the proverbial smoke filled rooms, the author speculates about the downside of too much democracy, citing Donald Trump's incitement of racist and xenophobic elements to wrench the 2016 nomination from the Republican establishment. Carter had won the popular vote in the 1980 primary, and the nomination to run for re-election. Kennedy had eventually hunkered down with only the carry over staff from his father's and brother's campaigns—mostly older men who were ill equipped to manage under the new Democratic party rules. Would it have really been better to return to the old ways? All things considered, I think not! Certainly not now in the 21st Century—a democratically run primary process is the only way the Democrats can self-correct with greatly needed new blood. The skills needed are those that communicate with voters, who are not as clueless as some campaigns appear to think they are.

At different points in 1979 and 1980, the nomination and likely the presidency were Carter's or Kennedy's to lose. In the end, the both stumbled in ways that ensured neither of them would win in the general election. Kennedy's health care plans would have to wait for the election of Barack Obama in 2008. Although Carter had actually achieved the deal with Iran for the release of the hostages, he was out of office by the time they returned home and Ronald Reagan took credit for Carter's accomplishment. The whole series of episodes was like a Shakespearean tragedy—Camelot's end indeed.

Kennedy's less than stellar character was a perennial campaign issue, and in spite of his seeming preachiness Carter had his moral failings as well (though of a different nature). Today we're on the flip side of that coin with the Republican base embracing the documented sexual predator in the White House, apparently believing he will in the end protect them from the monsters they fear—while in 1980 the progressive base of the Democratic party viscerally wanted Ted Kennedy to be president in spite of his cheating in college, the tragic death of a young woman in a car he abandoned, and his infamous personal behavior somewhat similar to that of Trump today, expecting that the senator would deliver for them more progressive policies that President Carter had little enthusiasm for.

Does character count in political office? The honest answer is probably "only if it delivers the desired results." We should be candid with ourselves about that.

This book is about the 1980 primary battle between Carter and Kennedy. I learned a lot. My undergraduate degree is in political science and my senior seminar was in Campaigns and Elections. I love the game aspects of campaigns. This one goes into detail about a rare occasion in which a sitting elected President faced a legitimate primary challenge. It covered in detail the good and the bad of both men. In fact, it went into the flaws of each in much more detail than the strengths. Carter has had, in my opinion, the most successful post Presidential life of any modern President, but there is a reason he was a one term President. The book does a good job exploring why. Including how much the primary challenge played into the equation. It is also very ironic that part of the reason for the challenge was that Carter was too conservative for much of the party in 1980 and Kennedy was the more liberal alternative. After 1980, however, Kennedy would become less liberal in order to become a more productive Senator and Carter, free of the constraints of trying to get elected, became more liberal on a number of issues. There are also tidbits about Reagan’s campaign that I didn’t know such as how close ex-President Ford came to being Reagan’s running mate. It was also interesting to see the polling numbers which reflected how much less partisan in nature the country was then. Carter’s approval ratings during his presidency varied from almost 80% to less than 20%. Absent an outside force such as a war or major terrorist attack or a total economic collapse, we would not see either of those extremes currently due to the amount of partisanship. The nearly 80% did come before the hostage crisis. The less than 20% was during it, so that would count as an outside force, I guess. I really enjoyed it. As a listen the reader was a good one and appropriate for the subject matter.

Fascinating read for one whom did not bare witness to the events and gives an in depth, unique perspective in the understanding of such. However, it's difficult to follow until the core cast of characters are introduced and understood. The narrator delivered it with perfection. Capturing the emotions of the time in a poignant manner.

Great look into an interesting period

Very easy to follow narrative of the downfall and redemption of these two giants and the effects on the following decades. great performance, especially of Kennedy's voice, as well.