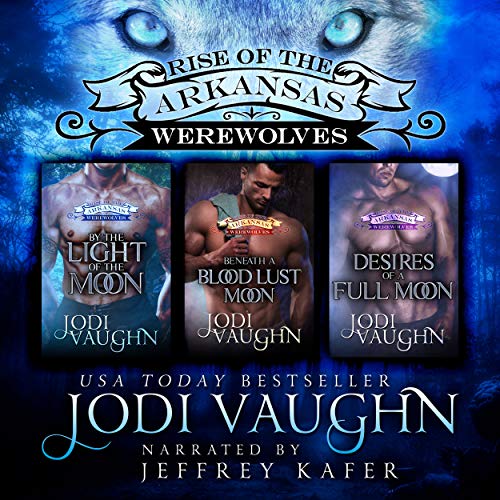 By the Light of the Moon, Beneath a Blood Lust Moon, Desires of a Full Moon

By: Jodi Vaughn
Narrated by: Jeffrey Kafer
Try for £0.00

By the Light of the Moon

Werewolf guardian Damon Trahan lives by a code: protect the pack with his life. Damon has experienced death and betrayal; now, all he wants is the freedom of his Harley and the loyalty of the men he rides with, the only family he has left. Those are the things he knows and believes in. Love and the hurt that comes with it has no place in his world...until he receives new orders: rescue female werewolf Ava Renfroe from a pack of rogue wolves.

Bartender Ava Renfroe is tired of alpha males running her life. Being raised as the daughter of a military general made her want independence more than air - and she has it! Until she’s kidnapped. Damon Trahan, her alpha-male rescuer and bossy pain in the ass, is exactly the kind of man she doesn’t want, but try telling that to her libido. His brooding good looks are pantie-dropping hot. Too bad he’s bats--t crazy and thinks he’s a werewolf. Worse, he claims she’s a werewolf, too. But when Damon shifts in front of her, she begins to doubt everything she’s known to be true.

On the run from the rogues, Ava and Damon can’t ignore the red-hot passion between them. But Damon knows it can’t last. Will he sacrifice everything he’s ever known to have the one thing he’s never meant to have? Or will the war between the packs destroy them before love is given a chance?

Beneath a Blood Lust Moon

Werewolf Braxton Devereaux would do anything to protect his mother from his abusive father, even commit murder. Or so everyone assumes.

Pack law justice is swift and unforgiving when it comes to bloodshed, and soon, werewolf assassins are out to balance the scales - Braxton’s life for his father’s. On the run, Braxton flees on his Harley to the anti-extradition state of Missouri, but before he crosses the border, he is felled by an assassin's bullet and an unsuspecting blonde.

Kate Wolph is in a legal battle to avoid losing her bed-and-breakfast to foreclosure. The last thing she needs is an injured wolf to care for, let alone a gorgeous man with blank eyes and a deadly smile. But the supernatural world of danger that surrounds him threatens to swallow more than just her life.

Desires of a Full Moon

Werewolf Jayden Parker tried to leave his personal demons behind in Louisiana when he joined the guardians in the Arkansas pack. But when his pack master puts him on a mission to stop a stalker who's targeting a female, Jayden comes face-to-face with his haunted past and the woman he once failed to protect.

Shamed and abandoned by her family, werewolf Haley Guthrie is forced to start over in Arkansas. Instead of a fresh start, she finds herself in danger and has to rely on guardian Jayden to protect her.

In a twist of fate, Jayden and Haley are reunited, only to discover an undeniable passion that refuses to be ignored.

What listeners say about By the Light of the Moon, Beneath a Blood Lust Moon, Desires of a Full Moon

Jodi Vaughn generously shared her 4th audiobook on a free credit . I loved it and bought this set before I finished the book.
If you like shifter, not averse to bikers, with a big dollop of humour then you need this audiobook set.

Shifter romance that will leave you with a grin. What more do you want from an audiobook?

Entertaining and interesting omnibus with hot men, strong attractions, and fun storylines and plots. The characters are likable and believable. The narrator did a good job! I received a free copy of this audiobook at my request and voluntarily left this review.

I listened to The Rise of The Arkansas Werewolves box sex and the wonderful narration really enhanced these stories for me.

“Damon was perfection, his body constructed of hard muscles, tanned flesh, and a face that would even tempt angels to sin.”

In By The Light of The Moon, Damon Trahan is sent to rescue Ava Renfroe who was kidnapped by a rogue group of red wolves. Together they discover that the rogue wolves have a plan with far reaching repercussions.

“He swallowed, admitting what he’d already known. He was in love with Ava Renfroe. Loving her would be the end of him.”

This story had a protective alpha wolf, a heroine who is strong with a mind of her own, an entertaining storyline and great narration. Definitely worth the listen.
-4 Stars!-

I loved this series of books. Greatly entertaining, fast paced and full of suspense.

I read a lot and I mean a lot....so when I got the chance to get audiobooks and listen to Jodi Vaughn books while at work....well all I can say is I was in my happy place......just finished the first box set and looking forward to the next set....so now I have the books and the audiobook 😃😃😃😃😃

I’m serious, if Jeffrey Kafer went down a list of everything wrong with me, one by one, and explained why they were correct I would just smile and nod. Seriously. Special voice and will literally listen to it if it’s out there.

The stories-
These are basically the typical romance werewolf stories as far as world building/ mythology. This obviously means you don’t have a bunch of rules to relearn the way the world works, which I prefer.
The first book is a great entry into the world and the relationship is really great. They really have a nice progression and the angst is minimal.
The second story is really interesting and I like the wild wolf on the run from scary wolf assassins and I hope we revisit them, as people that are more main characters, in later books.
The third book is my favorite of these three. Though the characters are repetitive in the books, the third book checks back in with a more minor character from the first book which I love. It also involves obsessive stalker crazy guy, and the rescue as a result.
These books can be listened to as a stand alone. I know that they are bundled but it’s always good to know!!
GFYDU MTYB DBAD

book 1 - Ava is kidnapped for purposes beyond her imagination; she's frightened beyond all hope when she sees them turn from salivating men into unbelievable creatures. The local pack leader sends Damon, a Guardian to find and rescue her. His duty as Guardian is to protect her, he quickly learns that he must protect her from his growing feelings for her, as well as hers for him. Ava learns she is not only more than human but destined to be mated to the leader of the Arkansas wolf pack. Another female has been kidnapped and Ava knows what will happen to her if she's not found in time. With help from others, including a feisty grandmother, the hunt is on. This story is filled with excitement, unrequited desires, and surprisingly a whole lot of humor. Author Jodi Vaughn has written a great paranormal story that is filled with the expected action and sex, but also with characters of honor, strength and a whole bunch of laughter. If you dig reading paranormal, then this story with its unexpected twist and turns will fulfill the need and have you rushing for Ms Vaughns next book. If you've never read her before, this book will definitely have you looking for her previous writings.

Book 2 - I love the hero in this story, strong, loving and believes in keeping those he loves, whether they deserve it or not, safe from harm. Easier said than done has he's running for his life for protecting someone he loves. As men are looking for him he runs into someone who needs his help and to whom he has a strong attraction to. Can he help save her business while keeping himself hidden from those who are trying to kill him? As I said earlier, I really like this character and how he got to the point of running for his life is very good storytelling. I recommend this book to those who love reading a good thriller, romance story with the great elements of a paranormal hero. Needless to say, I can't wait to read her next one Shadows of a Wolf Moon.

Good book by a fabulous author

I'm in love with this series now. I can't wait to continue reading it. Love it!

I'm a fan of Jeffrey Kafer's narration, so figured I'd give this boxed set a shot. For a paranormal romance, this was pretty decent. The narration is well done and is what kept me engaged in the story throughout. As for the story/content, there is DEFINITELY a lot of romance content and sexual content, but it was balanced pretty well with humor and paranormal action. All in all, if you don't mind the relationship stuff and sexual content, this is a decent urban fantasy story full of weres and interesting characters. At almost 20 hours, this is well worth a credit.

I enjoyed both the stories and the narration. I feel that the narrator did a wonderful job portraying the characters and enjoyed his accent. The stories are fast paced and interesting. Lots of supernatural high jinx to keep the reader entertained.

What a great introduction to the Arkansas Werewolves! I fell in love with all of them! Five stars as always got Jodi Vaughn.

I laughed until tears came.

I loved this series. I'm sad it's over. The first book was slow at first but as more Characters get introduced the more you get pulled into their world. I loved these books because it had everything I needed. Love, danger, and the best laughs! Do yourself a favor & binge this series!
Plus it's a bonus because it's not a YA book. It's a shifter series for people who are actually out of Highschool.
Great sex and sex jokes.

cant finish it, they call women the female instead of she or her. or the girl. and that really bothered me for some reason