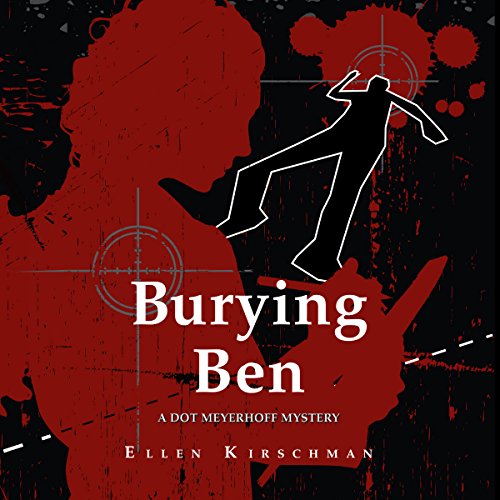 By: Ellen Kirschman
Narrated by: Daniela Acitelli
Try for £0.00

Dot Meyerhoff has barely settled into her new job as a psychologist for the Kenilworth Police Department when Ben Gomez, a troubled young rookie that she tries to counsel, commits suicide without any warning and leaves a note blaming her. Overnight, her promising new start becomes a nightmare. At stake is her job, her reputation, her license to practice, and her already battered sense of self-worth. Dot resolves to find out not just what led Ben to kill himself, but why her psychologist ex-husband, the man she most wants to avoid, recommended that Ben be hired in the first place. Ben's surviving family and everyone else connected to him are determined to keep Ben's story a secret, by any means necessary. Even Ben, from the grave, has secrets to keep.

Right from the start, Dot's investigation efforts get her into trouble. First she alienates Ben's training officer, who is barely managing to hold onto his own job. With the police chief watching over her shoulder, she tries to help the officer with disastrous consequences. After reaching out to console Ben's pregnant - and slightly sociopathic - widow, Dot winds up embroiled in the affairs of her incredibly dysfunctional family. Dot's troubles are compounded by a post-divorce romance, the ex who still has a hold over her, and an unwelcome visit from his new wife. By the time she uncovers the real reasons behind Ben's suicide and brings the people responsible to justice, Dot has not only resurrected belief in herself, she has also acquired some surprisingly useful new skills: impersonating a public official, burglary, and assault with a deadly weapon.

What listeners say about Burying Ben

Great story and great narration. I instantly connected with the main character, Dot Meyerhoff, who puts all she has into her case and won’t rest until she has a satisfying answer. This leads her into a lot of trouble though. Book 1 has a great into the lead character, who has an interesting job as a psychologist working closely with police offers to help them through training. Book 2 goes deeper into Dot’s dedication and compassion to her fellow officers. I can only give this series high praise and look forward to listening to book 3 in the series. This author and narrator make a great team.

I enjoyed "Burying Ben" by Ellen Kirschman. Psychologist Dr. Dot Meyerhoff is contracted to monitor the progress of newly hired police officers as they learn the ropes. Unfortunately, rookie Ben Gomez commits suicide. Wracked with guilt over missing the warning signs, Dot investigates Ben’s life on her own, opening herself to professional harm as she wades through the young man’s life and the police department’s secrets. Veteran alcoholic cop Eddie Rimbauer is a scene stealer who deserves a book of his own. Solidly recommended. Book given free in exchange for honest review.

Truly ENJOYABLE! Slow at first, then your hooked!

If you could sum up Burying Ben in three words, what would they be?

Eddie was my favorite character besides Dot. At first I hated his character, he came off as nothing more than a bully. Then you get to know his character better and understand some of why he is the way he is.

Which character – as performed by Daniela Acitelli – was your favorite?

Eddie for sure! Daniela played each character well, giving them their own personality through her voice (or voices).

"This audiobook was given by the author, narrator, or publisher at no cost in exchange for an unbiased review via audiobook boom"

Where does Burying Ben rank among all the audiobooks you’ve listened to so far?

Who thinks up these questions? I have over 300 Audible books. On its own merit this audiobook is fine. Compared to books by James Lee Burke, Ken Kesey, Arthur Conan Doyle, etc and narrators like Will Patton and the late Frank Muller, for example, it's in a lower league. The writing and story are well done by THIS author, the narration isn't on the same level as the greats. Odd sing song voice for one character is disrupting to the flow.

What was one of the most memorable moments of Burying Ben?

The story is strong, start to finish. The climatic finale where everything culminates in the solution.

The narration for the most part has a good pace. The issue I had was the just plain weird cadence to the police character Baxter. (I think it was).I can't picture the narrator, producer or author was completely happy in this regard.

I had to listen in small doses.

Despite the criticisms I mention, I did actually enjoy this audiobook. I empathised with what Dr. Dot was attempting to do, with Ben, and his family.

Thanks for making this available for review.

Three and a half stars

This book starts off really good, but falls apart in the middle. Dot makes very bad decisions and I was constantly shaking my head and rolling my eyes because of her actions. I begin skipping ahead because I wanted to find out what happened to the characters. The ending was pretty good. Dot gets the backbone that she lost in the middle of the book and everything gets put right. I almost didn't make it because of the narrator. In trying to give her characters different voices, she made them sound like idiots. That was the worse part of the book. I don't think I will get a book read by Daniela Acitelli.

This audiobook was provided by the author at no cost in exchange for an unbiased review.

What a thrilling, enjoyable and well-written read! It keeps you attention from start to finish - truly amazing!

The narrator did a wonderful job of giving life to this book and these characters. A terrific narration!

The story was interesting enough. Not a lot of back stories but characters were developed.
I’m sorry but if I’m going to be honest, this narrator needs to practice more and listen to herself. Almost all the characters sounded the same, except for one or two. I couldn’t tell who was talking to who. One of the exceptions was supposed to be a big gruff guy, but she voiced him as Julie Chen, impersonating Eeyore, giving play by play at the Big Brother House. And it was sooooo drawn out that I increased the audio speed to make it sound normal. When she wasn’t voicing a character, everything sounded like she was reading a shopping list.
If not for the narration, I would recommend this audiobook. Sorry. (:-(

I loved how it kept you guessing

I loved how it kept you guessing, it was a very slow start but I pushed through it and loved it. I just didnt like how the narrator made her man voices, it was hard to listen.

I was first attracted to this book due to the narrator. Then the blurb pulled me in. Ellen Kirschman wrote a story that had some very unexpected twists. I thought the premise of the book was very interesting. Some of the characters were very endearing while others I did not like at all. Dot the Police Psychologist is the main character. How she dealt and helped others was unique. Daniela Acitelli performed the book great with her distinguished voices for various characters. I requested this review copy audiobook and have voluntarily written this review.

When I first started this book, I was worried about what I had gotten myself into. It sounded interesting, but there was no easing into the story in this book!
Dot Meyerhoff is a newly appointed psychologist for the Kenilworth Police Department. She was told she had to be there to see the body of a suicide victim immediately. At the time, she met Ben Gomez, a young rookie, who is having trouble adjusting to his new role. He used to work at the grocery store and his new field training officer is constantly on his case. Dot becomes Ben’s counselor and tries to help him adjust the best way she can, but it doesn’t stop him from committing suicide himself. He left a note blaming her and now she is caught in this web she has trouble getting out of.
I really liked Dot and some of the other characters of this book! I felt engaged and wanted to see how Dot would get herself out of this mess. I enjoyed Daniela Acitelli’s performance.
I was given this free review copy audiobook by the narrator at my request and have voluntarily left this review.

This was a soap opera in a novel! You have everyone. The maniacal patriarch, the put upon matriarch, the psychotic daughter, the well-meaning shrink, corrupt police, knowledgeable friend, loving but clueless grandparents, ex who wants to stay friends after having an affair, wannabe new boyfriend, and the suicidal husband. By the time Dr. Dot figures out whodunit and fixes things up, there aren’t very many people left to like in this story. But don’t give up on anyone and don’t think anyone is innocent!

I actually enjoyed this listen. It was interesting and there was enough family drama to keep anyone happy. Why did poor Ben commit suicide? Because he was surrounded by idiots. Finding out what, when, who, how, and why is the entertaining part of this audiobook. There is much to like in the writing and more to like in the narration. Daniela Acitelli’s performance was a good one. It took a little getting used to and she overemphasized some of the more annoying nasal qualities of some of the characters’ voices in the beginning, but by the end of the book she had perfected them all and I enjoyed listening to her immensely. She added to the quality of the story.

I received this audiobook free through Audiobook Boom! in exchange for an honest review.