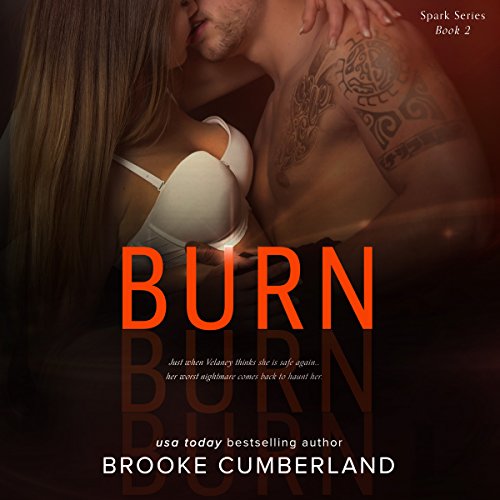 By: Brooke Cumberland
Narrated by: Hollie Jackson
Try for £0.00

Just when Velaney thinks she is safe again...her worst nightmare comes back to haunt her. Eric is dealing with his own insecurities as he tries to accept Velaney's decision to help the enemy...can he get past it? Will they be there for each other in the end? Eric struggles to step aside and trust Velaney...but will his past keep him from doing so? Can he let go in order to move forward? Velaney and Eric had their fair share of ups and downs in Spark their love was undeniable and intense. Just when you think they could get their happily ever after...pasts collide and merge together...will they fight for what they want? Or will their love crash and burn?

What listeners say about Burn

This was an amazing follow up to Spark! Eric and Velaney's story is one to go down in history! I am in awe of Velaney's strong character with what she has been through and continues to go through! Eric is determined to not give up on his woman and in this story he will make any woman ask "where do I find a man like him?!" Absolutely loved their story full of all kinds of obstacles! Brooke Cumberland continues to bring us her best!

I should write “Ditto!” See my review from the first book in this series.
Contrived, so over the top drama I couldn’t finish listening.

No Spark for Me

This book picked up immediately were the first left off, and unfortunately it continued with the lies and lack of trust. I jjst cant understand the heroine. I cant connect with her. I enjoyed the first half of the book which, by the way, was much hotter than book one since the heroine no longer carries her v card. Then a new obstacle is dropped but the twist is just frustrating. I don't see the personal growth in the character. Despite my complaints, the book was written technically well. And it got better again by the end. If we just skipped the over flowery epilogue.

What did you love best about Burn?

Merrill later Hollie Jackson again brought the story to life! I cannot imagine anyone else doing a better job on Ms. Jackson!

Would you recommend Burn to your friends? Why or why not?

No. See additional comments below.

Everything was absolutely perfect! Her cadence, pauses, emotions etc.....all perfect!

What a Bimbo! Stop making such stupid decisions!

STORY: 2.5**
PERFORMANCE: 5*****
OVERALL: 3.5***
This book picked up immediately were the first left off, with Eric and Velaney on the airplane. I almost stopped reading after the 1st page because I was so frustrated that Velaney was going to continue keeping ridiculous secrets from Eric like she did in the first book. However, I talked myself into continuing.

In BURN we get to watch the relationship between Eric and Velaney grow much deeper. We get to meet Eric's family and we get to learn a lot about Eric's past. I really enjoyed the first half of this book which was much spicier than book #1 (now that Velaney is no longer a, "virgin", the sex scenes are more frequent and much more creative). Unfortunately, just when the story was really getting good, Ms. Cumberland decided that the story needed a dramatic event to rock what was an ideal, beautiful love story. So, at about 50% into the book, like in the first book, Velaney again decides that she needs to do what she thinks is best for Eric, making stupid, irrational, RIDICULOUS decisions. Uggh!!! I was beyond frustrated while reading this! Do people really act this way in real life? Geez! I understand the need for dramatics in fiction but I despise stories about couples who fight or break up without a good, legitimate reason, when 1 character won't hear the other person out, when a character makes silly presumptions or will not let the other person tell their side of the story. Yes, it adds pages to the novel but it is unnecessary drama and such a waste of time! It is also a boilerplate, common occurrence in most m/f contemporary and new adult romance which is why I stopped reading these kinds of books and sought out more unique stories.

Despite several periods of extreme frustration, the book did get better again yet it ended with what I thought was an extremely corny epilogue. Overall, I consider this to be a 2.5 star story yet because I listened to it on audiobook and had the pleasure of listening to a 5-star narrator, I rated this audiobook 3.5 stars, rounding up.