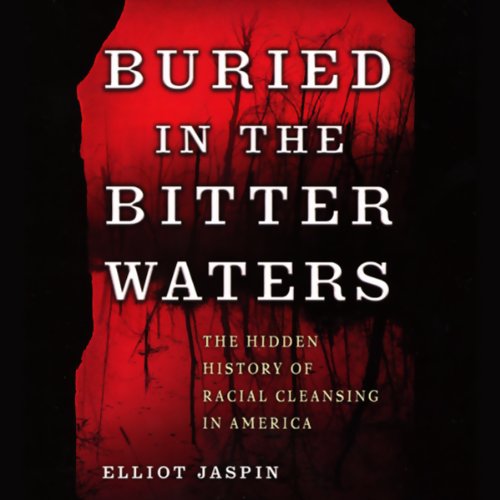 Buried in the Bitter Waters

The Hidden History of Racial Cleansing in America
By: Elliot Jaspin
Narrated by: Don Leslie
Length: 10 hrs and 44 mins
Categories: History, American
4.5 out of 5 stars 4.5 (4 ratings)

Buried in the Bitter Waters

From the heart of the Midwest to the Deep South, from the mountains of North Carolina to the Texas frontier, words like these have echoed through more than a century of American history. The call heralded not a tornado or a hurricane, but a very unnatural disaster: a manmade wave of racial cleansing that purged black populations from counties across the nation.

We have long known about horrific episodes of lynching in the South, but the story of widespread racial cleansing above and below the Mason-Dixon Line has remained almost entirely unknown. Time after time, in the period between Reconstruction and the 1920s, whites banded together to drive out the blacks in their midst. They burned and killed indiscriminately and drove thousands from their homes, sweeping entire counties clear of blacks to make them racially "pure". The expulsions were swift; in many cases, it took no more than 24 hours to eliminate an entire African-American population. Shockingly, these areas remain virtually all-white to this day.

Based on nearly a decade of painstaking research in archives and census records, Buried in the Bitter Waters provides irrefutable evidence that racial cleansing occurred again and again on American soil, and fundamentally reshaped the geography of race.

"In the tradition of muckraking journalism and detective history, Elliot Jaspin employs the modern term 'cleansing' to uncover a hideous and veiled part of America's racial past....This book forces a moral confrontation with the truth that the past matters, however innocently we prefer to live in the present. With engaging prose and dogged research, Jaspin reveals America's home-grown pogroms." (David W. Blight, Professor of American History, Yale University)

a compelling read with a disappointing conclusion

Buried in the Bitter Waters is a meticulously researched, compellingly written narrative of the U.S.' suppressed history of "racial cleansing" from the Copperhead conspiracies of Kentucky and Indiana during the Civil War, to the unwillingness of Forsythe County, Georgia not only to come to terms to its own history of racial cleansing, but with the legacy of that event, as mirrored by the events of 1987, when a "Freedom March" was met with a virulent outburst of racial animosity. This book is a very compelling read, until the final chapters, which are dedicated to the author's struggles to get his materials published in the Cox Newspaper syndicate -- whose flagship paper happens to be the Atlanta Journal-Constitution, which has a history of downplaying or outright denying the racial cleansing and its lingering aftermath in neighboring Forsythe county. This personal narrative of backroom editorial politics, while interesting, is a distraction from the book's main theme, and would have been more appropriately addressed as an epilogue, instead of being woven into the woof of the main narrative. Despite this shortcoming, Buried in the Bitter Waters is an important work, detailing a history which haunts the United States to this day.

What made the experience of listening to Buried in the Bitter Waters the most enjoyable?

The performance was outstanding. I enjoyed listening to every single page!

I was previously aware that a few (Rosewood, Forsyth County) communities of African Americans had been forcibly removed, but I had no idea that it was such a common event across the US. This book will make you feel as if you were there when the evictions took place. You will understand the emotions of those being removed. Most of all you will learn how the author fought hard for the property rights of those who lost land illegally during these evictions.

I highly recommend this book not only for the student of history but also for anyone who is concerned about race relations in the past and present.

Accounts of real life occurrences that are relevant today throughout the United States - the disbelief of segregation and evidence continues to thrive throughout this country - and people want to say that it is a thing of the past - outdated by whom? My question is whose past are we trying to forget! Thought provoking accounts of inhumane treatment of people for merely sharing different skin pigmentation. Join Mr. Jaspin and others in opening up your eyes and mind to societies public divide – take a stand to erase separation permanently instead of conveniently.

I could not give this book the justice it deserves. If you are a fan of history and the untold stories of our past you will enjoy this book as I did

Its sad how easy it is for us to forget and cover up the parts of our nation's past. We as a nation try not to see the elephant in the room. I know why, because it will make what was done to the Native Americans look tiny and what Nazis did to the Jewish People look small But, as a proud Black American "Americans" feel like wow if we as a people can still be strong in a nation that did everything to remove us and still be here hundreds of years later to write these thoughts of minds out in the open as I am now. I feel there should not be a limited time frame for those Black Americans to be paid for there losses. As we all know, White Americans want to forget and continue this closet hatred. One day I guess after all the old White Americans have died off the young White Americans can finally put this evil act to rest because all the young White Americans feel like I do, Change is coming!!!!

Things you never knew about the towns around you. wow. The past shapes the present.

This is an awful, terrible, truth bearing slice of not just Black history but American history. It’s important to note that it isn’t a history that’s very long ago. This is a book that should be required reading from high school through college. These pieces of lost, covered over, and “fabled” happenings are as relevant in 2019 as they were when they happened. This history lingers in our families, towns, cities and country. It is in our education and employment systems. Our history is recurring even today and this book speaks to the truth of that fact.

Suppressed history - everyone should read this.

I read a review of this book complaining that it was "mired in the past". Hello? It's a history book.

The angry person who wrote that clearly thinks *some* history should always remain buried. It might have helped if they'd read the last pages, in which the author points out that shame isn't the goal; it's just a necessary step on the way to true reconciliation.

This book should be required reading.

The history of the United States is filled with shameful stories of the treatment of her African American citizens. This book should be required reading for all students in high school and presented in such a way that it is used for understanding of the economic plight of African American families.

Very captivating and important work. I definitely enjoyed the book. My only issue was with the delivery. It would have been helpful if the reader had delineated between chapters/case studies by announcing a new chp or case. Often I felt that the different racial cleansing (case studies) bled into each other; it was hard to always tell when one case ended and another began.