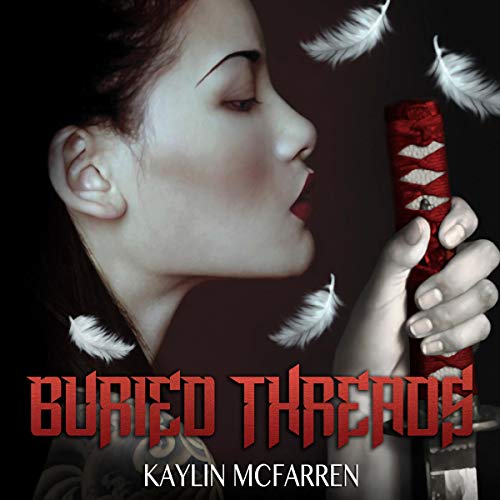 Rachel Lyons and Chase Cohen work together as the successful owners of a treasure-hunting company. But a seemingly simple assignment--to track down a priceless gem that is believed to be buried in a shipwreck deep within the Sea of Japan--takes a startling and dangerous turn.

Faced with a monk's dark prophecy that a natural disaster will soon strike Japan, killing millions, Rachel and Chase must embark on the mission of a lifetime in order to uncover the three cursed samurai swords that can avert the catastrophe.

Chaos ensues as their adventure takes them from shark-infested waters and creepy caves to haunted hidden tombs and a confrontation with Yakuza gang members. Time is running out as the prophecy's day of reckoning draws near. Will Rachel and Chase succeed before disaster strikes?

What listeners say about Buried Threads

A great page-turner that you'll read in one night.

"Buried Threads" is book two in the "Threads," treasure-hunting, suspense novel series by the author, Kaylin McFarren. Book two is a stand-alone story, but I would strongly recommend reading book one, first. If that isn't an option for you, you'll still be able to enjoy book two without being hopelessly lost. In "Buried Threads," Ms. McFarren's protagonists, Rachel Lyons and Chase Cohen are now working together in Chase's treasure-hunting company. The two take on a job to find a priceless gem that is believed to be buried in a shipwreck deep within the Sea of Japan. Things quickly get complicated when they learn of a dark prophecy of a disaster that will kill millions and destroy Japan. "Buried Threads" has everything a reader/listener needs for a great story. Erotic suspense, wild adventure, supernatural artifacts, shark-infested waters, killer Yakuza and a mysterious monk are just a few of the things in a story told well. If that isn't enough, there's also cursed swords. Ms. McFarren not only maintains a really good story pace, she also manages to give the reader/listener what feels like an authentic window into Japanese history, culture and society. Over all, "Buried Threads" is definitely a page-turner that's worth your time and money. Finally, this free, review copy audiobook was given to me at my request and I have voluntarily left this review.

Definitely an enjoyable series so far

The first thing I noticed with this book is that there are 2 new narrators. They seem to take turns narrating for Chase and Rachel but from different perspectives. I think it worked much better to me than just voicing Rachel differently like the first book. As with the first book, there is plenty of action and a decent plot line to draw you in and keep you interested throughout the book. I am definitely happy to continue with this series.

This Was A Very Good Storyline... An Awesome Performance By Both Narrators And A Kick Ass Ending! Just An Overall Good Listen... I'm Looking Forward To More Work From The Narrators And This Book Series...

I am hooked on this series! I love finding a new to me author. This book has so many facets from Japanese culture, under water treasure hunting, sharks, love, hate, revenge, family, honor, humor, and more. The story even has some paranormal elements that add to the suspense and dire situations. The narration on this book was excellent with the various characters and accents. I requested this review copy audiobook and have voluntarily written this review. I so enjoy learning things when listening to a book. For instance, tattoo's on women are frowned upon with condemnation, the dark dining opens one senses to taste, smell, and texture, and Japan is full of magical places. I will definitely listen to more books by this talented author and narrators. This book is both a standalone listen and part of a series.

Better than the first book

This book had element from the Japanese culture, which I love, so it was a great edition to the series. It had action, adventure and suspense all rolled into one, a sort of Indiana Jones/Lara Croft combo I rather enjoyed. It did, at times, get a bit confusing, too much going on at the same time and elements I found hard to believe in the story world. It lacked flow at times and was overcrowded with twists and characters.
The narration was good, much better than the first one!

Stranger in a Strange Land.

Here we have an interesting mystery/thriller indeed; one full of twists and turns to keep you wondering what’s around the next curve. Our treasure hunting couple Rachel Lyons and Chase Cohen is hired to recover a priceless gem in the Sea of Japan. Once overseas they find the job is much more complicated and dangerous than they were led to believe. They become embroiled in a life and death hunt for priceless swords that are cursed; placing the entire island of Japan in the path of catastrophic earthquakes should the swords not be returned to their rightful resting place. The true plot is akin to a Tomb Raider or Indiana Jones scenario. Love interests are included along with some steamy sexual encounters. The Japan location and social differences were also quite interesting and well done. I liked it all-in-all. This audiobook was given by the author, narrator, or publisher at no cost in exchange for an unbiased review via Audiobook Boom.

This was better than the first book, but (apart from all of the "relationship" stuff) I am still struggling with the dialog and lack of depth. There is a reason I usually stick to my comfort zone when reading, but I am determined to get this series read. The descriptions of the books are just better than the execution of the books in my opinion. I will say that the narration was a lot better in this book than the first.

Sunken treasure, murder, betrayals, the Asian gangs conspiracies, romance, action this book has it all. Full of emotional attachments and conflicts in both well-plotted story lines; complex characters; and twists, turns and surprises that kept me guessing right up to the end all made for one heck of a read!! I definitely look forward to reading more of the Kaylin McCarran series. "I was given this free review copy audiobook at my request and have voluntarily left this review."

It was good just a bit too jumbled

Would you try another book from Kaylin McFarren and/or Hugh Bradley and Libby Hudson ?

I was asked to read and review Buried Threads, and since I saw it as an audiobook, I purchased a copy for myself. I enjoyed part one, Severed Threads a lot and looked forward to part two. The narration of Buried Threads is a waste of having a male and a female narrator. I think this should always be done in the format of the man reading all the male characters, and the female reading the female characters. It really throws the audiobook off when the chapter changes POV, and each narrator is reading a Chase and Rachel.

In Buried Threads, we pickup with Rachel heading to Japan to meet up with Chase, who is already there scouting out their latest adventure. This is pretty much where we left things at the end of book one.

Don’t get me started on the Yakuza aspect of the story, and the whole slave trade bit. I could understand it there is going to be a spin of series; we were just left hanging at the end, is there going to be a spinoff series? Because you really should give us more on what is going on with the geisha, and not leave the storyline open ended.

There were so many twist and turns in this story I didn’t feel like they had a cohesive flow. It was more like Kaylin McFarren wanted to divulge every bit of knowledge she could possibly gather about Japan in this story, and still try to compress it into the storyline. It left things a bit too jumbled for my tastes. Yet at the same time; I still enjoyed the overall story, and for the most part, it was very entertaining. I really love the characters of both Rachel and Chase, and I look forward to moving on the next installment Banished Threads. So overall, I am giving Buried Threads Three Stars, it was good....Sara

What did you love best about Buried Threads?

No one is safe or comes out the same in this action-packed story.

What does Hugh Bradley and Libby Hudson bring to the story that you wouldn’t experience if you just read the book?

They bring the story alive with rotating points of view.

Without giving too much away, I enjoyed hearing the emotion and love shared between Rachel and Chase in the final chapters.

A remarkable story that needs to be heard.