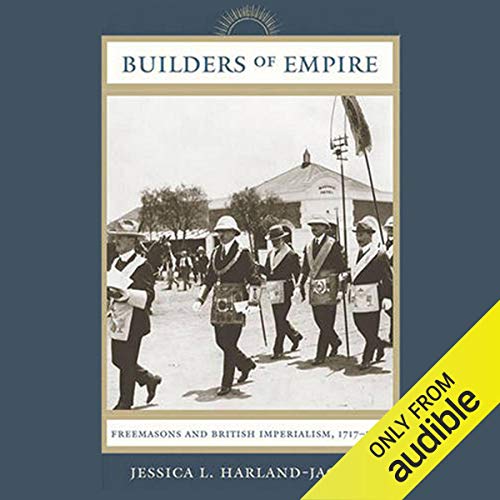 They built some of the first communal structures on the empire's frontiers. The empire's most powerful proconsuls sought entrance into their lodges. Their public rituals drew dense crowds from Montreal to Madras. The Ancient Free and Accepted Masons were quintessential builders of empire, argues Jessica Harland-Jacobs.

In this first study of the relationship between Freemasonry and British imperialism, Harland-Jacobs takes listeners on a journey across two centuries and five continents, demonstrating that from the moment it left Britain's shores, Freemasonry proved central to the building and cohesion of the British Empire. The organization formally emerged in 1717 as a fraternity identified with the ideals of Enlightenment cosmopolitanism, such as universal brotherhood, sociability, tolerance, and benevolence. As Freemasonry spread to Europe, the Americas, Asia, Australasia, and Africa, the group's claims of cosmopolitan brotherhood were put to the test.

By tracking an important, identifiable institution across the wide chronological and geographical expanse of the British Empire, Builders of Empire makes a significant contribution to transnational history as well as the history of the Freemasons and imperial Britain.

What listeners say about Builders of Empire

Great read if you are a Masonic history enthusiast

I downloaded this book thinking that I may get an in depth account of the influence of Masonic thinking in the creation and expansion of the British empire. However, this book focuses most of its narrative on giving a detailed account of the history of the Masons in the British Empire. These are two completely different topics.

If you are a Mason, are intimately familiar with their beliefs, or have read a lot about Masons and want a substantial amount of additional details of their history in Britain since the early 1700's then this is no doubt the book for you (assuming you don't mind some repetition).


If instead you are a history enthusiast, wanting perhaps to understand the interaction of the many factors that made the British and later the American Empires what they eventually became, and wonder what role Masons may have played, you may be disappointed.

Interesting for the Masonic student

This is an interesting text for the Masonic student; however, very likely dry and uninteresting for everyone else. The book chronicles how Masonry spread with the empire and contains many interesting details, but the book itself is wordy and requires a fair amount of effort on the part of the listener. I would recommend this to any Mason for general knowledge.

Beyond boring and trivial

This book has almost no substance. Unbelievably repetitive. So much irrelevant and immaterial information. Resembles a mediocre master's thesis.