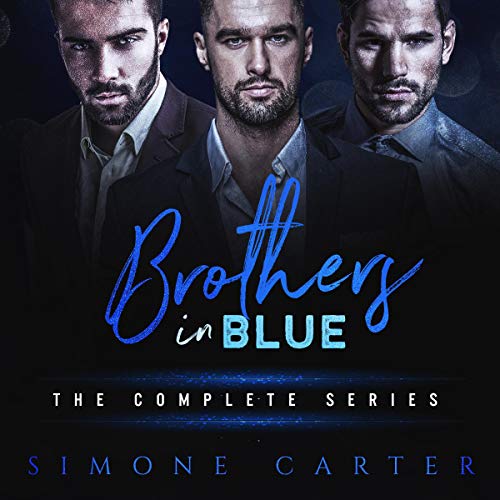 Brothers in Blue: The Complete Series

Book 1: Nick
Darcy Campbell watched in horror as her boss, his son, and other employees were gunned down before her eyes. She made it out alive, but they knew who she was and were coming for her. Detective Nick Baker vowed to protect her, but his cabin in the woods brought a whole new set of dangers. Could Darcy resist him?

Book 2: Nate
Someone is stalking Sophie Cruz. She doesn’t know who and she doesn’t know why. Her boyfriend Nate is shot by an unknown assailant, and she worries that she’s endangering his life as well as her own. Should she leave him to keep him safe, or confront this unknown danger head on?

Book 3: Noah
Jenna Harris takes custody of her half-brother, Lucas, after the death of her father and stepmother. Now she’s busy launching her business and raising him at the same time. But something's going on with Lucas. He's involved with a bad crowd and up to no good. Can Noah intervene and convince Jenna that sometimes fairytales do come true?

WARNING - These stories contain steamy scenes and are not suitable for all ages - 18+.

What listeners say about Brothers in Blue: The Complete Series

Ms. Carter did an awesome job with this book. The Bakers Brothers are awesome. They are a close-knit family. The brothers are police officers and the women in their lives fear for them. I love that each book is different but connected. It would be nice to continue the series with the sisters, who are also police officers. Each book has suspense, romance and a villain.

Nick #1 – Nick and Darcy
Darcy witnessed several murders where she worked and saw one of the killers. Luckily the killer did not see her and she was able to call the police. Det. Nick Baker responded to the call. The killer found out she saw him and she receives several threats. Nick takes her to his family cabin in the woods where things really heat up between them. This book has plenty of steam and suspense.

Nate #2 – Nate and Sophie
Nate and Sophie were so good together. I love the way these books are written where these brothers find their true love or soul mates. Sophie had a really hard life, including rape and sodomy by her stepfather. She pulled herself up, went to court, had him sent to prison, and became emancipated. She put herself through college and was best friends with Darcy from book 1. This book is really good. Sophie and Nate fall in love. Unfortunately, there is a damper in her life as she has a serious stalker. This book has a lot of suspenseful moments as well as romance.

Noah #3 – Noah and Jenna
Wedding planner, Jenna’s previous husband was very abusive and treated her so badly she did not trust love or men. Jenna and Noah have an immediate connection but Jenna tries to dismiss it due to her fears. She has custody of her half brother, Lucas, after the death of her mother and step-father. She is busy with her career and Lucas is busy hanging with a bad crowd and one bad dude in particular who causes all kinds of trouble for both Jenna and Lucas. This book has a lot of suspense and I kept waiting for Noah to rescue Jenna at any moment.

I enjoyed each of these books and would definitely recommend them. I am sorry that the Baker brothers are all taken. I like the fact that these books do not have cliffhangers and have an HEA.

Lissa Blackwell did a good job with the narration. I was given this free copy audiobook at my request and have voluntarily left this review.

Thank you Simone Carter for this great series!

This is the first Simone Carter book I have read, it definitely
won't be my last. Great series about 3 Brothers who
are Police Officers.

I really liked the first book. But once I got through the next, it became difficult to sustain interest.

Nick
Oh my, oh my, oh my!! A man in uniform rescuing a damsel in distress! Yeah, it's a great story with some steam! I really enjoyed listening to this book and thought it was well written with great character development. It's exciting from beginning to end. I think this is a great start to a new series and am looking forward to hearing about the other two brothers!! The narration was good as far as voices go but I felt like Lissa Blackwell needed to read it a time or two more before recording. She does add to the story but I feel like it could have been a bit better. Overall, an excellent story with good narration, well worth your time!

Nate
Just as I enjoyed book 1, Nick, I really enjoyed this one too! You don't have to read/listen to the first one but you'll want to. This series is full of steam and suspense and after hearing two of them, I'm looking forward to the next one. I have and will continue to recommend this series to my friends. The narration is better with this book than book one but now she, Lissa Blackwell, sounds like she's in a cavernous room while reading. I do enjoy her various voices for the characters and overall she does add to the experience. I believe this book, this series, is worth your time. It's a great listen and I look forward to the next installment.

Noah
This is book three in the series but you don't have to read the other two to appreciate and enjoy this one. I loved the other two and now this one! This is a great series. It has romance, suspense, action and plenty of steam. This isn't a long listen but Simone Carter packs it full. The characters are great and the storyline well done. The narration was well done. I've listened to Lissa Blackwell narrate all three books and she has grown in her narration. Although she still sounded like she was in a room too big with nothing to "collect" sounds. It's better than the last book but still there. Overall, an entertaining listen that I will be recommending to my friends.

these were given to me at my request for review

I sincerely loved these books and the way each of the brothers found love with the ladies they were protecting was amazing.

The story seemed okay but I couldn't get past the narration, it sounded tinny to me and I listened for over three hours. This one was not for me. I was given this free copy audiobook at my request and have voluntarily left this review.

This is an enjoyable collection of three romantic stories. Each story talks about a strong and orphaned girl who finds her happiness with a police officer, one of three brothers. Moreover, each story has a bit of drama to spice it up.

The narrator was good; she was able to use male and female voices for different story characters.

A bit cheesy for me

This series was a bit cheesy for me, and each book followed a repetitive formula.